A duty to remember: 30 years after Tiananmen 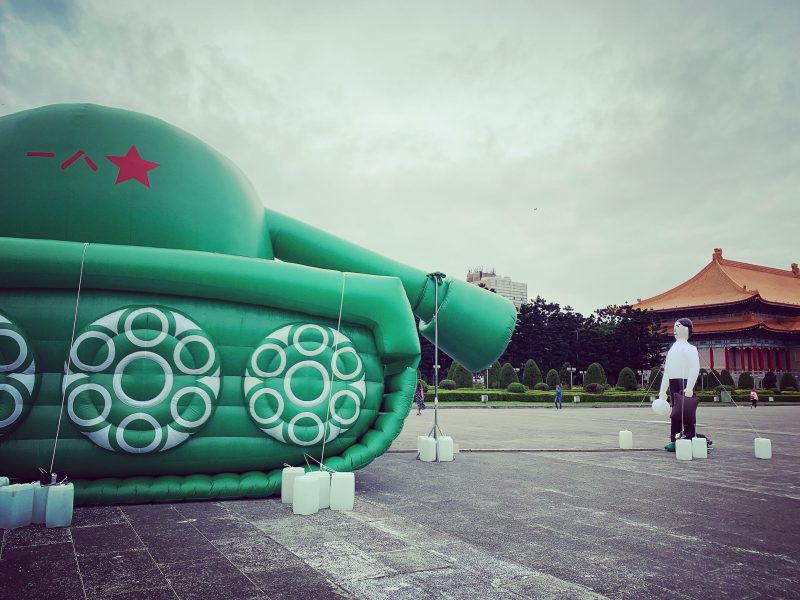 Installation made by Taiwanese artist Shake, and inspired by the photo of Tank Man displayed in central Taipei. Photo by Filip Noubel, used with permission.

It has been 30 years since the rise and fall of the 89 Democracy Movement (八九民运) in China that culminated in the infamous Tiananmen Square Massacre on June 4, 1989.

On that day, the Chinese military carried out a brutal crackdown on student-led demonstrations calling for democratic reforms. The Chinese Red Cross estimated that 2,700 civilians were killed, but other sources point to a much higher toll. A confidential US government document unveiled in 2014 reported that a Chinese internal assessment estimated that at least 10,454 civilians were killed.

The Communist Party of China has never publicly acknowledged these events or accounted for its actions with an independent investigation. There are no references to the 89 Democracy Movement in any history textbooks and most university students in China have never heard about the massacre.

Global Voices has been covering the issue for over a decade. This year we commemorate the 30th anniversary of what led to the June 4 massacre to fulfill our duty to keep the memory of those events alive, despite continuous efforts by Beijing to deny basic historical truth.

Beijing’s determination to censor any mention or veiled reference to June 4 has resulted in a perpetual game of cat and mouse taking place online. In April, a foreign ad featuring images of the Tank Man circulated briefly on Chinese social media before being suppressed. Another of our stories explains how Chinese netizens play with censorship and come up with creative ways to allude to the event without mentioning it by its name, yet when they get caught, the punishment is immediate and severe. All of this in an environment where obtaining information that is not filtered by China’s Great Firewall of online censorship has become very dangerous and almost impossible.

Expressing critical views on social media platforms outside of China also poses a personal risk, as you can read in this story. And expressing alternative views not aligned with the Party’s line, even if embedded in Marxism, usually results in harassment and arrest, as we describe here. This draconian censorship is being exported worldwide by Beijing, including to Hong Kong.

Yet the duty to remember continues to inspire people and netizens across the globe. Direct witnesses speak up in emotional interviews, while brave journalists in Hong Kong tell their own stories about June 4. Hong Kong also hosts copies of the most emblematic symbol of the movement, the Goddess of Democracy in public space. In Taiwan, a powerful art installation displayed in central Taipei pays tribute to the events of 1989. Global netizens, including Reddit users, also use humor, art, and online memes to keep the memory of the Chinese pro-democracy movement alive.

As we continue to update this page, you can read more in the following stories:

Tiananmen commemorations: an inconvenient truth for Beijing, a dire warning for Hong Kong and Taiwan

30 years after the Tiananmen Massacre: The troubled history of the Goddess of Democracy

30 years after the Tiananmen Massacre: An interview with survivor Zhou Fengsuo