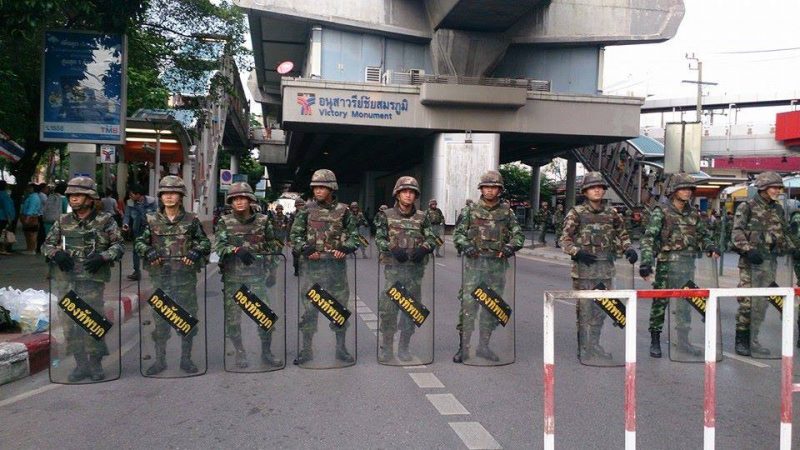 Thai soldiers stand on guard in Bangkok, the country's capital during the first week of the coup in 2014. Source: Prachatai Facebook page

Thailand’s army grabbed power in May 2014, in what was billed as an effort to end street clashes between the supporters of the country’s major political parties. It immediately banned protests supposedly to enforce political stability, prominent politicians were placed under house arrest, and media stations were closed. It vowed to restore civilian rule once political and electoral reforms were implemented.

Three years later, the army is still in control of the government, thanks to a constitution drafted by the same officials it appointed.

Although the army has vowed that political normalcy would return once elections were held, many worry that civil liberties continue to be undermined. Media reports are strictly regulated, critics are detained to undergo ‘attitude-adjustment’ sessions, and the anti-Lese Majeste (“Royal Insult”) law is used to quell dissent across the media spectrum.

Over the past three years, Global Voices has closely monitored the situation in Thailand, placing special emphasis on the citizen media initiatives that expose the policies of the military dictatorship on one hand, and the creative activism of Thais for the return of democracy on the other.

Below are some of our reports that seek to explain Thailand’s political crisis and the continuing campaign to resist military rule.

Rise of the Junta

Here are our stories about the first week of the coup, the background of the political crisis, the propaganda tools of the military government, the constitution that reinforced military rule, and the significance of the removal of the 1932 revolution plaque.

The junta has exhibited zero tolerance for news reports, social media postings and even computer games that ridicule or criticize the government. In April 2017, it threatened to arrest Internet users simply for following social media accounts of overseas critics.

Thailand has one of the harshest Lese Majeste laws in the world. Facebook users who simply ‘liked’ or ‘shared’ a post deemed insulting to the monarchy have been arrested and are facing long prison terms. Human rights monitors have shown that Lese Majeste arrests dramatically increased after the 2014 coup, leading some to conclude that the junta is using the law to harass and detain activists.

Multiple politicians, journalists and students who criticized the army have been invited to spend several days inside an army camp to undergo ‘attitude-adjustment’ sessions. Below are the testimonies of those who underwent this unusual type of detention.

Protests are prohibited in Thailand, but activists and concerned citizens have adopted creative means to express their political demands such as selfie protests, salutes to democracy in the style of the ‘Hunger Games’ series, and the use of toy heroes to symbolize the resistance against the military dictatorship.