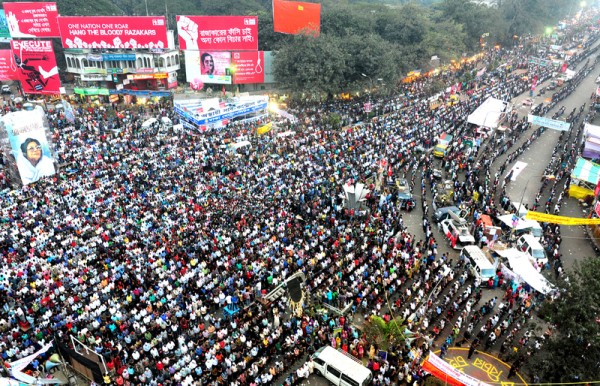 This moment has been in the making for decades. Hundreds of thousands are occupying Shahbag, an intersection in the heart of Dhaka, the capital of Bangladesh, demanding death penalty for war crimes committed during Bangladesh's liberation from Pakistan in 1971.

On 5 February 2013, the Bloggers and Online Activists Network (BOAN) initiated the call to occupy Shahbag and demand capital punishment for the secretary general of the Islamist party Jamaat-e-Islami Abdul Quader Mollah, hours after he was sentenced to life in prison on 344 counts of murder, rape and torture committed during 1971.

Since then, the demands for death penalty have extended to all war criminals facing trial and protests have spread like wildfire across the country.

Like Mollah, some other indicted war criminals have held public office and were living a life of impunity in Bangladesh for decades until 2010, when proceedings were initiated against them by the International Crimes Tribunal (ICT).

4 Dec: ‘How Many Burning Bodies Will Satisfy Them?': Political Violence in Bangladesh

4 May: Islamists Demand that Bangladesh's Women Stay at Home

5 Apr: Protests Against Arrest of Bloggers Charged with Blasphemy in Bangladesh

1 Apr: Bangladesh Authorities Go After Bloggers, Claim They Are ‘Anti-Muslim’

27 Feb: What India Can Learn From #Shahbag

10 Feb: In Pictures: The Protesting Crowd In Shahbag

3 Apr: Netizen Report: Bloggers Under Threat in Bangladesh and Beyond

Shahbag: An Ocean in the Making from Mehdi Hasan Khan on Vimeo.

Please contact Global Voices South Asia and Bangla Translation Manager Rezwan, if you have links or story ideas, or want to add to this page's resource list.