This page was last updated in March 2009.

After months of political tension between the current administration of president Marc Ravalomanana and the mayor of Antananarivo, Andry Rajoelina, acts of violence and social unrest erupted in many Malagasy cities January 25-29. On January 24, a political demonstration led by Rajoelina gathered a significant crowd in Antananarivo to call for a national strike and demand the resignation of the current administration.

On January 25, attempts to seize a radio station by the authorities turned into a violent conflict that sparked further acts of violence and riots throughout the city. Shortly after, confrontations spread to the provinces, resulting in many deaths and properties damages. The political confrontations and violence escalated further when a transitional government was declared by the opposition in parallel to the current administration.

The culmination of violence occurred when armed forces fired at civilians marching onto the presidential palace. The country has since been marred by political stalemate featuring a plethora of mediation efforts by national and international delegations, a media war of words, wrestling over ministry offices, an opposition leader in hiding and an army mutiny. As last efforts at mediation are attempted, the prospects of martial law or civil war looms larger.

Global Voices in Malagasy and French

Many of the articles above have also been translated to other languages by Lingua. Please visit the English versions to see.

The new Ushahidi tool allows Madagascar-based individuals to send information on incidents via SMS messages to a live online map. The system is managed by Foko Magagascar bloggers. The number for sending SMS to Ushahidi in Madagascar is 00447800000197 This is a screenshot of the new Ushahidi SMS reporting platform for Madagascar.

The FOKO Blog Club has been instrumental in supporting citizen media initiatives during the political struggle. Andrydago from the Cyber Observer has disturbing photos of the violence, including bodies of children dead on the ground. 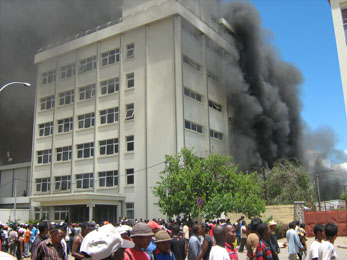 Fire on the streets of Antananarivo, by Jenilisa