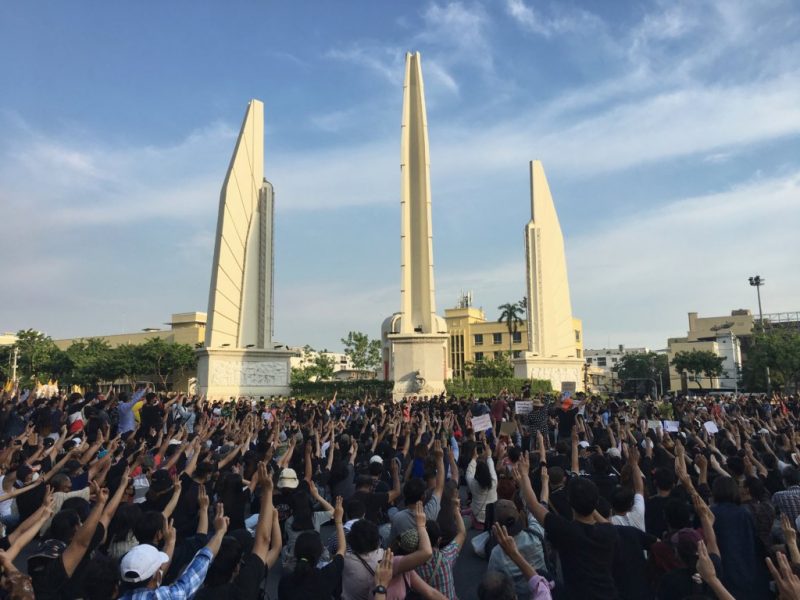 Pro-democracy protesters, led by students from the Free Youth group and the Student Union of Thailand, calling for democratic reforms on July 18, 2020, at the Democracy Monument in Bangkok. Photo and caption by Darika Bamrungchok/EngageMedia. Used with permission.

Despite the COVID-19 pandemic restrictions, and the imposition of an emergency decree which prohibits mass gatherings, young Thai activists continue to organize mass protests across the country.

This student-led pro-democracy movement marks the first time in modern Thai history that the monarchy has been criticized publicly. Thailand has a strict Lèse Majesté (anti-Royal insult) law, punished with up to 15 years in jail.

The first wave of protests was sparked in February 2020 by the forced dissolution of an opposition party which outraged and inspired young people to organize pro-democracy actions. Despite a lockdown in March, the “youthquake” continued, with young Thais using the internet to speak out on political issues, build resistance networks, and launch online protests.

The second wave of protests was signaled by the student-led protest on July 18 at Bangkok’s landmark Democracy Monument. More than 2,000 protesters gathered and raised three demands, namely dissolving the parliament, rewriting the military-based constitution, and ending the intimidation and arbitrary arrests of critics of the government.

Students and youth activists echo these demands in various forms of creative online and offline protests. For example, some have adopted as a symbol of defiance the three-finger salute inspired by the popular United States movie series, “The Hunger Games.”

Authorities have since summoned dozens of student leaders, artists, and human rights activists and threatened them with harassment suits, yet the movement has gained nationwide support. Pro-democracy advocates from various sectors have also participated in several rallies organized by students.

Besides, young activists from Hong Kong and Taiwan have also issued solidarity statements that reflect the growing influence of the #MilkTeaAlliance, a netizen-driven democracy campaign challenging Chinese online trolls.

For more details, our partner EngageMedia has published an explainer about the situation in Thailand.

We will also continue to republish the coverage provided by our Thai media partners Prachatai and The Isaan Record.

Stories about Why are young people protesting in Thailand?

"We believe it would be better to live in a society where people are not imprisoned for simply expressing their political opinions, for demanding a better society..." 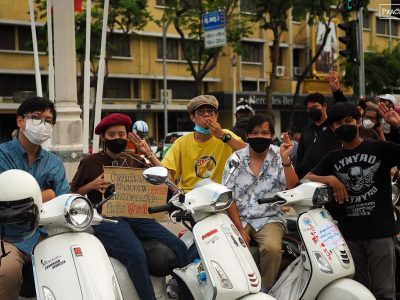 Since last year, protestors have been calling for the resignation of Prime Minister Gen Prayut who came to power through a coup in 2014. 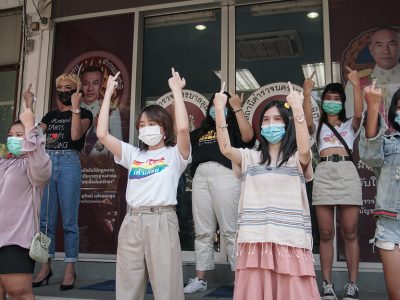 "I think everyone should be a feminist, because if it’s a true democracy, the people should be supreme, and every person should be equal, no matter their gender or class." 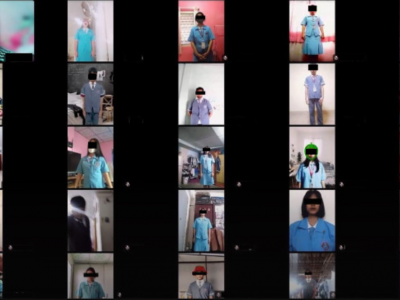 Some students refused to stand while others used a camera filter to make it appear like they were wearing a school uniform.

Missed the live-stream of the Global Voices Insights webinar on the "Milk Tea Alliance"? Here's a replay. 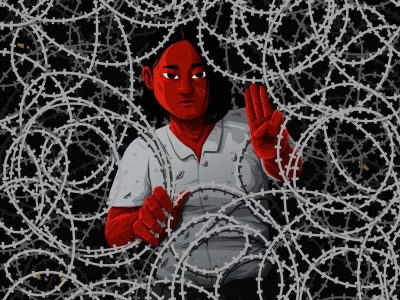 "It’s time for us to rise up for a better future not just for ourselves, but also for the generations to come.” 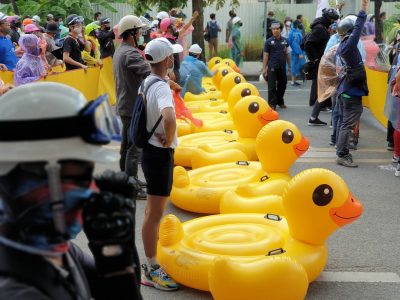 "The image of Thai authorities, armed to the teeth with riot gear and shields, facing off against…rubber ducks…highlights the sheer asymmetry of the battle between protester and state." 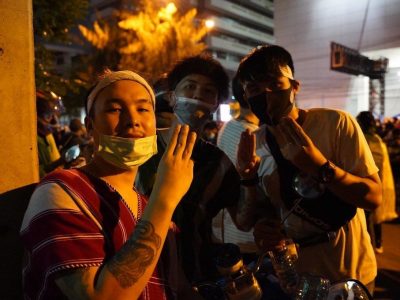 "I feel that I have to come out to demand my rights. My friends, my younger siblings, or my children in the future should have a better life than this." 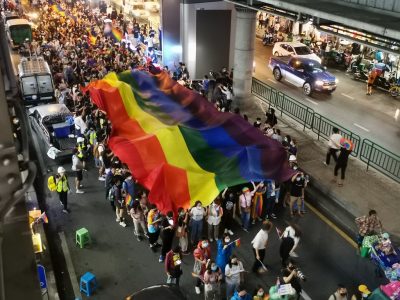 Thai LGBTQ+ activists and pro-democracy protesters march together for equality

In Bangkok, LGBTQ activists join ranks with democracy protestors join to demand gender and marriage equality as well as political reforms of the monarchy. 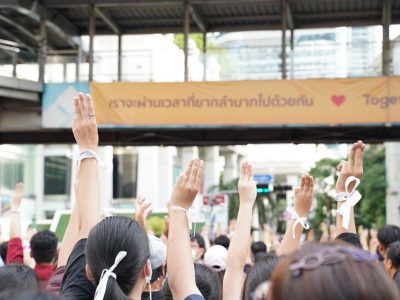 "...while protesters rely mainly on media and other forms of communication to mobilize, these organizations have nothing to do with the students’ communication, coordination, and management of the protests." 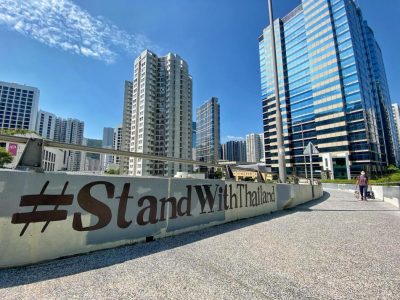 While Hong Kong protests have influenced organisational and protest tactics in anti-authoritarian movements abroad, the current wave of grassroots uprisings, in turn, prompts Hongkongers to develop a transnational solidarity. 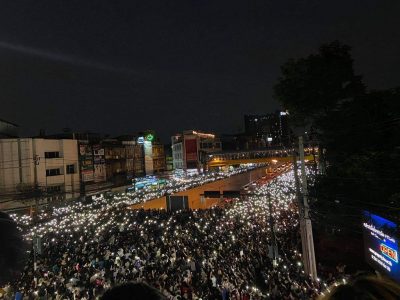 The government failed to portray the protesters as aggressive and violent, causing a political backfire and pressuring authorities to step back. 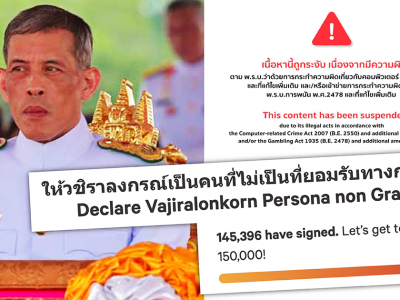 Criticizing the monarchy is a crime in Thailand yet protesters, especially young activists, continue to organize rallies calling for monarchy reforms. 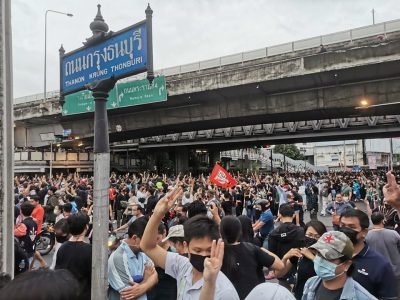 Undaunted by the October 16 crackdown, protestors once again take to Bangkok’s streets

"There is no more staying neutral, either you side with democracy or side with dictatorship that uses power unfairly." 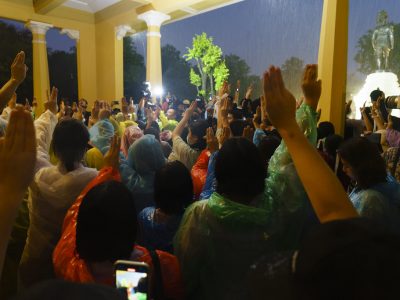 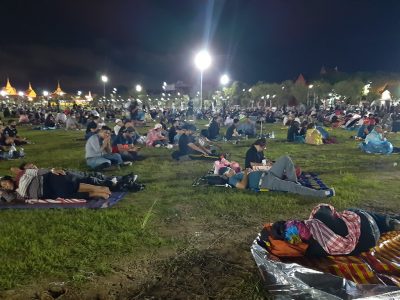 “Meeting the kids in this generation again, I don’t want them to be 74 and still having to come and sit like this again. I want it to end already.” 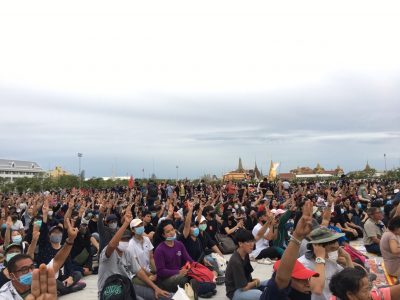 The plaque has this inscription: "People shall know, that this country belongs to the people, not the king as they lied." 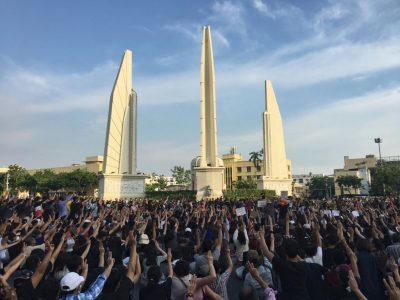 An explainer about the ongoing youth-led protests in Thailand. 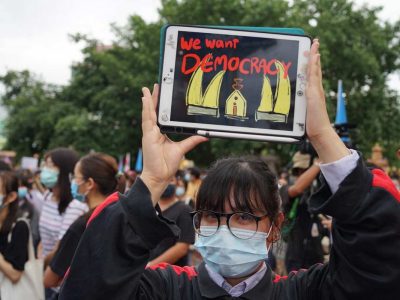 The youth-led protest actions in Thailand are not just happening in the capital Bangkok. Here's a report of a major rally in the country's northeast region. 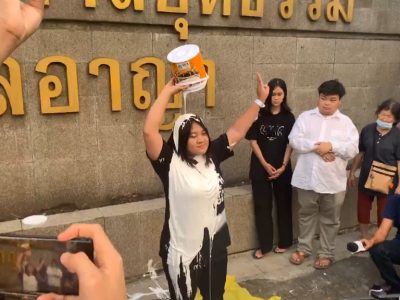 “Paint can be washed out, but we can’t wash out injustice.” 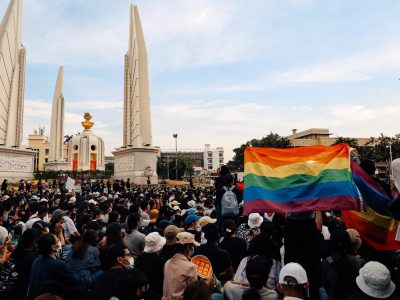 "It’s time that change needs to happen. Right now, frankly, we’re not here for our own future, but for our child’s future."