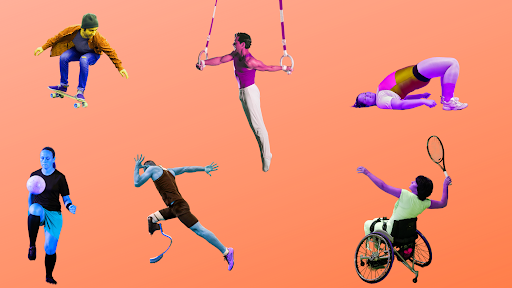 This year, with the Olympics, the Paralympics, the European Football Cup and a world that had been trapped at home for many months, televised sporting events became a way to connect with the outside world, and with other countries. At the other end of the spectrum, for many people living through lockdown, getting out of the house to exercise became crucial for their mental and physical health. YouTube yoga, Zoom barre, micro-workouts, long walks with the dog and a general worry about our already sedentary lives becoming even more sedentary, all highlighted the importance of movement, exercise and sports.

Some historic barriers were lifted in 2021, especially for queer athletes and other marginalized groups. For the first time, openly trans athletes competed at the 2020 Tokyo Olympics, an event that saw a record number of LGBTQ+ athletes. Additionally, the first openly gay men came out in both the NHL and the NFL in the United States.

Athletes used their platforms to talk about sexism, racism, authoritarianism and mental health, and many of them sparked much-need conversations and drew attention to issues that had long been overlooked.

For example, Hidilyn Diaz, the first-ever Olympic medalist from the Philippines, used her victory to highlight Philippines President Rodrigo Duterte’s authoritarian crackdown on free speech, and even mentioned that she had once been labeled an ‘enemy of the state’ after fundraising for her athletic endeavors.

Sports, including organized and competitive activities and the other things we do to move our bodies, have long been dominated by white men. But women are taking their rightful place in this arena, with many women taking home gold medals and records for their countries at the Olympics, while others broke down stereotypes simply by joining the sporting world. Despite much progress to open the field up to all, we still frequently find instances of discrimination in sports.

The many double standards that women face were brought to light in 2021 when a cleric in Turkey criticised the Turkish Women’s volleyball team for their ‘immodest outfits’ soon after the Norwegian women’s handball team was fined for opting for slightly more conservative shorts, as opposed to bikini bottoms.

Similarly, racism in sports was thrust into public discourse when Black English footballers were the target of horrific racial abuse after the team lost in the Euro final. But racist incidents were not just confined to the audience: The International Olympic Committee was accused of upholding racist policies numerous times during the 2020 Olympics. They refused to allow Black swimmers to wear specialized swim caps that would protect afros and also forbade any athletes from using their platform to publicly challenge oppression or racism — a long-standing and powerful tradition at the Olympics.  And we cannot forget the raging controversy around women athlete’s testosterone levels, which many said unfairly discriminated against African female athletes.

But these problems are not limited to the most popular sports or international sporting events. Women who prove themselves in sport are regularly patronised, and those who achieve victories have to fight twice as hard to get there. The conversation around sports regularly ignores the mental health impact of athlete’s rigorous training regimes and public position. Athletes who prioritise their mental health have even been penalised for doing so.

At Global Voices, we recognize that identity and sport are intrinsically related and that for many athletes, sports provide a platform to promote equality and defy oppression. We believe sports are inherently political and support athletes who use their position as a platform for change. This coverage seeks to examine sports from the perspective of those who have historically been underrepresented in sports discourse, to consider their achievements, struggles, the injustices they face.

Take a look at our stories below:

Stories about Sports and diversity from October, 2021

Cricket, a relatively new sport in Cameroon, is on a steady rise with over 7,000 children from different regions who are now being trained for the game.

Female foeticide to football in Nepal

Srijana Singh Thakuri of Nepal's national women's football team: "My story is not unique. It is just what happens when girls and women are given a chance, opportunity, and investment."

Reports allege that coaches and Malian Basketball Federation (FMBB) officials for Mali's under-18 and under-19 national teams sexually harassed, abused, and assaulted dozens of teenage players since 1999.