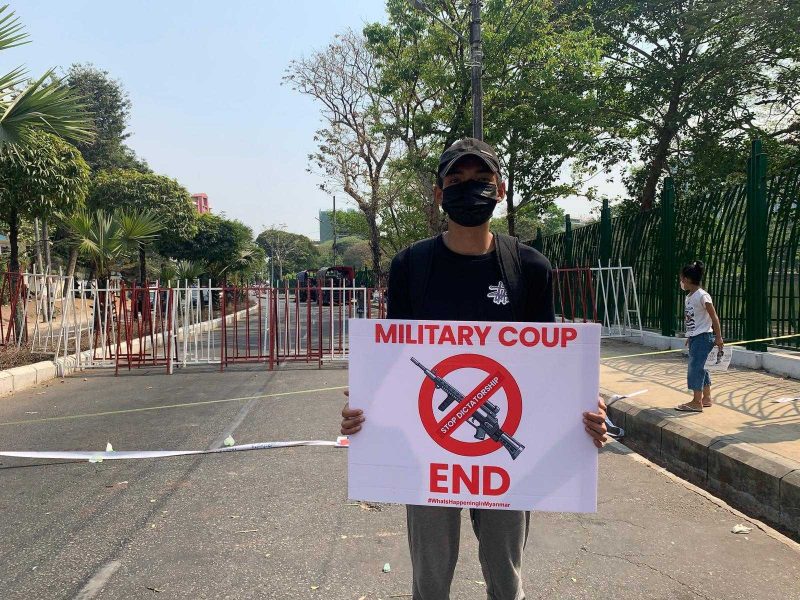 Photo from inside Myanmar used with permission by author who wishes to remain anonymous for security reasons.

After Myanmar’s grabbed power on February 1, they immediately faced strong resistance from citizens seeking to restore civilian rule. This resistance grew into a nationwide movement that attracted global support. The three-month anniversary of the coup was in fact marked by protests across the world which came to be known as “Global Myanmar Spring Revolution Day”.

Myanmar’s “Spring Revolution” aims to unite the country’s citizens in strong rejection of the coup and a call for the return of democratic rule. It encompasses all forms of resistance, including the Civil Disobedience Movement (CDM), community actions, social media protests, and even the use of guerilla tactics and armed resistance against attacks by security forces.

The Spring Revolution follows the tradition of previous anti-junta movements such as the “’88 Pro-Democracy Uprising” in 1988, and the “Saffron Revolution” led by Buddhist monks in 2007. Today’s Spring Revolution has maximized the creative use of digital tools in coordinating protests and promoting the goals of the democracy movement. It has also striven to be more inclusive, challenging gender and racial prejudices and seeking to build solidarity across Myanmar’s many ethnic communities.

Since day one of the coup, Global Voices has documented the resistance movement in Myanmar, partnering with independent media groups and relying on reports by local researchers and citizen journalists highlighting the situation across Myanmar’s communities.

This special coverage section continues our special coverage, focusing on the coup’s social impact and the ongoing defiance of Myanmar’s citizens as they challenge the actions and legitimacy of the military regime..

We were deeply inspired by the words a citizen journalist shared with us during a webinar we hosted in April about the situation in Myanmar:

The military junta could only terrorize our country, but they can’t rule. They could shoot, kill and arrest our young heroes called “Spring flowers” but they can’t avoid Burma’s Spring.

"We're all just waiting for the knock on the door. Sometimes you hear footsteps on the stairs, it's like they're coming for you: you have this feeling all the time."

In Myanmar's history, poets have shown solidarity with the ordinary people and have been at the frontline in every revolution.

"The soldiers we saw when we were young were loved by the people. But what they are doing now is just opposite of what I believe and ... want to...

Learn more about the common acronyms used by Myanmar protesters, their meaning, and significance to the coup and the democracy movement.