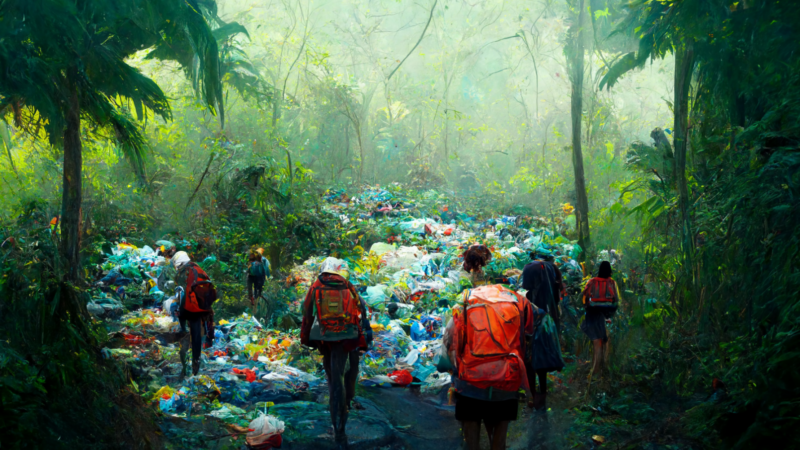 About eight percent of the world’s annual CO2 emissions are related to the global tourism industry — primarily through airfare and transport pollution. And these emissions don’t show any sign of slowing down. Transport-related carbon dioxide emissions from tourism grew at least 60 percent between 2005–2016 and are projected to increase by around 25 percent between 2016–2030 without urgent decarbonization efforts, according to the UN World Tourism Organization.

While this figure is certainly alarming, the indirect effects of this industry can be even more insidious — especially for the local communities directly affected. Coastal development for tourist-related facilities erodes important coastal barriers and kills coral reefs and marine ecosystems. Millions of acres of land have been taken from Indigenous populations for tourism development — often for projects that alter and damage the land beyond repair. Increased traffic, pollution, waste, and water usage for tourism activities can strain local infrastructure. Not to mention, countless local communities are forced from their neighborhoods as gentrification and rising prices make life unaffordable.

Last November, environmentalists, politicians, activists, and economic stakeholders from around the world met in Glasgow for the 26th annual United Nations Climate Change Conference (COP26). A novel addition to the conference was the inclusion of the Glasgow Declaration on Climate Action in Tourism, an initiative to “declare our shared commitment to unite all stakeholders in transforming tourism to deliver effective climate action.”

Read more: Post-COP26, a Caribbean view on climate injustice and ‘1.5 to stay alive’

The declaration pushes for a transition to tourism with an environmentally conscious foundation, from the consideration of carbon emissions to the promotion of community wellbeing, particularly in developing nations. It calls on all areas of the tourism sector, such as the airline and hotel industries, to participate in more transparent, regenerative, and climate-conscious practices. The declaration describes five core values for achieving these goals, including the measuring and disclosure of all tourism-related emissions, setting decarbonization goals, restoring ecosystems, and increasing collaborative efforts between stakeholders. In many countries, the response to these issues is travel in the form of ecotourism.

Ecotourism, at its core, aims to promote “responsible travel” that simultaneously aids in the conservation and protection of the ecological, social, and cultural aspects of a destination. However, this does not mean that all ecotourism is sustainable or accessible.

For many, ecotourism can also feel like an exclusionary and purely symbolic venture available for primarily privileged Westerners with robust pocketbooks. This is a widespread sentiment in ecotourism hotspots such as Bali, where despite a carefully cultivated image of an island with sustainable hospitality practices, tourists use, on average, 3.5 times the amount of plastic as locals, and 70 percent of the money made from tourism is sent abroad, according to estimates by the Bali Tourism Board.

In Jamaica, the proposed construction of a luxury coastal hotel with a self-proclaimed “commitment to sustainability and environmental awareness” garnered public outrage after videos were shared of a mangrove forest being bulldozed to make way for the hotel.

Similarly, as “off-the-grid” travel and adventure sports increase in popularity, many remote places are dealing with more tourists than ever before. Aside from the obvious environmental impacts of this — increased tourists mean more waste and more disruption to pristine ecosystems — this also has led to safety concerns as novice and inexperienced adventurers enter environments they are unprepared to navigate.

This is most visible within the mountaineering tourism industry, as increased participation has led to long waits and crowding at crucial, dangerous intersections; increased trash and waste; deadly falls, accidents, hypothermia, and altitude sickness; and more search and rescue operations, which are often risky for the medical and park staff.

On the other hand, ecotourism also has the potential to greatly improve the economic and environmental condition of a location. This is seen in Nicaragua, where ecotourism guides assert that tourists are needed to save natural reserves from encroachments. With their tourism industry taking hits from political unrest in 2017, followed by the COVID-19 pandemic, the number of international tourist arrivals declined from almost 2 million visitors in 2017 to around 470,000 visitors in 2020.

According to Marcelo, a tour guide for the Isla Juan Venado Nature Reserve, without an influx of tourism to sustain the upkeep of the reserve, locals had to resort to other means of sustaining themselves, such as chopping firewood or hunting iguanas and crocodiles for food and leather that can be sold. Previously, many worked in the tourism and service industry. In this way, ecotourism can be proven to be a juncture by which to encourage locals as well as tourists to protect their land.

Similarly, island nations that served as attractive destinations for their ecological wonders saw a massive decline in tourism due to the COVID-19 pandemic — for many of these countries, tourism is the primary source of income. However, this also reveals the flawed nature of tourism in many countries — without other economic ventures, locals are often forced to economize their traditional and spiritual connection to the land for the entertainment and pleasure of tourists. In many ways, the manner in which ecologically vital sites are marketed and exotified for foreign consumption can be considered to be a form of modern-day colonialism.

Global Voices intends to use this special coverage series as a lens by which to examine the environmental impact of tourism, the nuances and challenges of the emerging eco-tourism industry, and its environmental and cultural implications.

Stories about Ecotourism from October, 2022

"These islands attract millions of visitors a year keen to experience their natural wonders. Yet often this very “ecotourism” is contributing to their degradation."