Lindane is a neurotoxin that can be carcinogenic 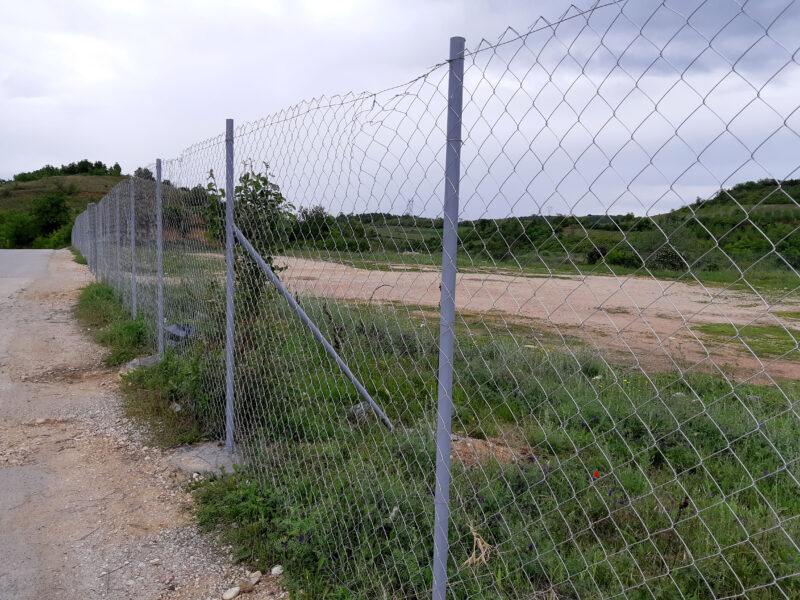 The illegal dump site with lindane in the location Pelenica near Dračevo, Skopje, was fenced in 2019 but there were no other activities to deal with the toxic waste on the site so far. Photo by Meta.mk, used with permission.

The tests undertaken by the Ministry of Environment of North Macedonia at Pelenica, a tourist location next to the Skopje suburb of Drachevo, showed a high concentration of lindane (HCH). Lindane is a neurotoxin that can harm the nervous system, liver, and kidneys, and may be carcinogenic. OHIS, the now-defunct chemical complex that was responsible for the site, did not place the hazardous waste in concrete pools, as is the case with the two landfills in OHIS’s yard, which makes the chemical particularly dangerous for the soil and groundwater in the area.

According to tests done at several points on the site, high concentrations of HCH were detected in the top soil layer, at a depth of 20 centimeters or less. The hazardous waste is mixed with construction waste and waste from a0 glass factory. At a depth of just half a meter, pure lindane was found. The summary report by the ministry issued on December 30, 2022, states:

The dump site contains several types of hazardous waste – about 40,000 tons of pure HCH, and about 6,500 tons of mixed HCH, together with waste from a glass factory. The samples taken from the site also contain a high concentration of chlorоbenzenes and dioxins and furans. Only one metal barrel with waste was found. Other barrels may have been removed in the past and their contents scattered on the site. There is also construction debris. 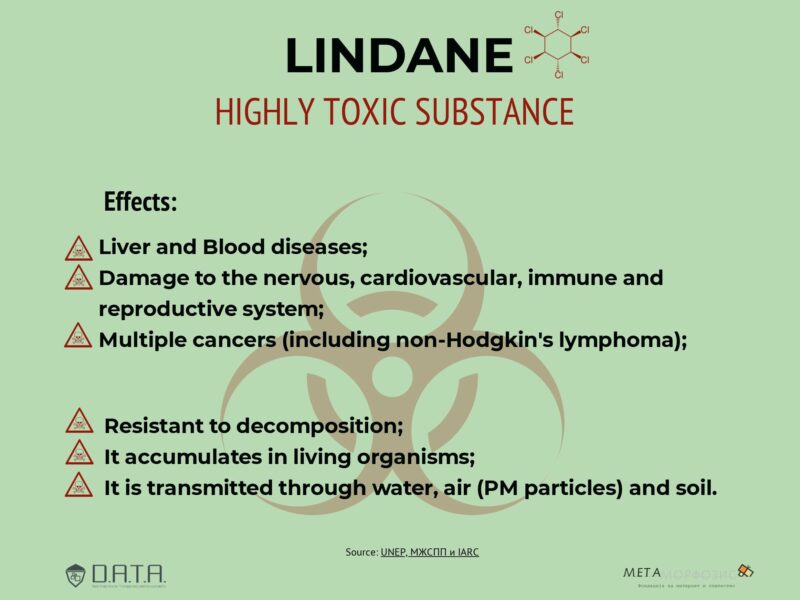 Lindane has been classified into a Group 1 category of carcinogenic substances with sufficient evidence that causes non-Hodgkin’s lymphoma. Graphics: D.A.T.A. unit of Metamorphosis Foundation used with permission.

The Ministry of Environment says that there are three options for remediation. The best method would be to overlay the dump site, including the embankment, with soil, in order to prevent direct contact with the contaminated surface soil and limit the future infiltration of rainwater into the site. Researchers will also continue monitoring the groundwater for contamination, and will prohibit its use if necessary, depending on the results.

The examination was done by “Deacons Emma,” together with the subcontractor TAUW from the Netherlands last November, and the sampling was monitored by an audit team composed of professors from the Institute of Chemistry at the Faculty of Science and Mathematics in Skopje. Analysis of the samples was performed in the “Eurofins” laboratory in the Netherlands, and it cost EUR 48,700 (about USD 50,185)

Publicity photos made available by the Ministry of Environment and Physical Planning of the Republic of North Macedonia alongside the summary report about the testing of the Pelenica toxic waste dump site. Public Domain.

A legacy of toxic waste secretly deposited decades ago

OHIS was one of the biggest chemical companies in former Yugoslavia, consisting of 5 factories and eight other plants, producing everything from detergents to plastic to cosmetics and pesticides. It was active between 1957 and 1990 when it was partially privatized in the controversial conversion of state-owned capital, with resulting smaller companies generating losses, ending in bankruptcy in 2015.

Some of the toxic waste remaining from the OHIS was disposed of, according to regulations on the factory premises in two official dumps consisting of concrete pools that prevent toxins from seeping into the groundwater and surrounding soil. However, the existence of the third lindane dump site, located about seven km away from the factory complex, was previously unknown to the public.

Following a journalists’ investigation in 2018, Meta.mk alerted the public to the danger, and over the next several years, produced dozens of articles about lindane pollution and the third dump site, which is outside OHIS’s yard.

According to the available information, it is assumed that the lindane was deposited in the 1970s by OHIS after the ban on its production and use. Meanwhile, before it was fenced off and made off-limits, Pelenica was a popular spot for school excursions for children from primary schools from the entire Skopje area. Besides fields and meadows, the area also contains a church and a park and was a popular picnic spot for the local population, as demonstrated in this tourism advertisment.

Over the course of five years, Meta.mk watchdog articles informed the public both about the health risks and the institutions responsible for solving the issue. Relentless efforts by journalists who “pestered” the officials demanding answers also spurred environmental groups and citizens to demand the state institutions act swiftly. As a result of this advocacy, at the end of 2018, the Ministry of Education forbid the schools to use the site for day trips, while in 2019, the Ministry of Environment erected a fence to prevent people from visiting the contaminated area.

Meanwhile, the government also started efforts to clean up the two official lindane dumps within the old factory complex, discovering another landfill within the premises and several more tons of pure lindane packed in sacks in one of the decrepit warehouses. Toxic materials, including 450 tons of lindane and 200 tons of contaminated soil, were exported to specialized plants in Switzerland, France, and Germany for destruction according to EU safety standards.

Lindane is classified as a group 1 carcinogen by the International Association for Cancer Research, with sufficient evidence that it causes non-Hodgkin lymphoma. The chemical is persistent and does not break down in the environment. Since it is a volatile substance, it scatters from the contaminated soil and is also contained in the PM particles. People can be exposed to Lindane through the consumption of contaminated food or by breathing contaminated air. Chronic (long-term) exposure to lindane by inhalation in humans is associated with liver and blood disease, as well as disorders of the nervous, cardiovascular, immune, and reproductive systems.