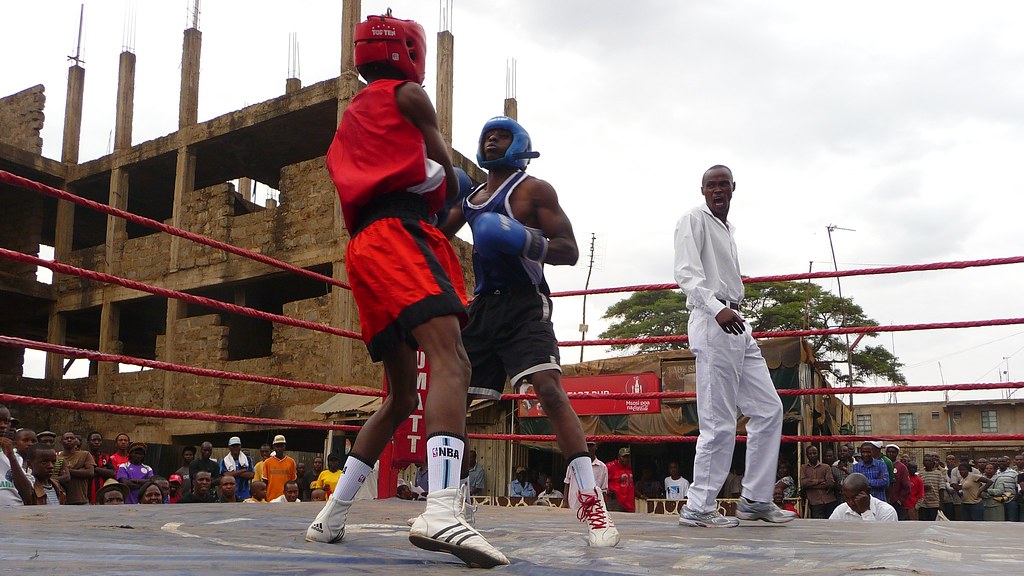 Boxing in Kenya – Image by clemgirardot. Licensed under CC BY-NC-SA 2.0.

A boisterous boxer is reviving enthusiasm for the sport in East Africa. It is not every day that a boxer almost single-handedly promotes his own fight in a foreign country. But that's exactly what Tanzanian boxer Karim Mandonga, also known as ‘Mandonga Mtu Kazi’,’ did on Jan. 15, 2023. When he beat Kenyan boxer Daniel Wanyonyi in the Super Middleweight bout in the Kenyan capital Nairobi, theirs became the most talked about fight. Yet, it wasn’t even the main act.

Boxing in Kenya has seen a lull in the last couple of years, seeing a drop in attendance and interest from sponsors due to the closure of local neighborhood clubs and social clubs sponsored by local companies. These clubs provided a competitive league among the boxers in their heyday, as noted in Xinhuanet:

[Former boxer Thomas] Wamburu said the high boxing standards of the 1980s and 1990s were helped by (the presence of boxing clubs in neighborhoods around Nairobi that nurtured youths who were inclined towards boxing. The most outstanding were the Dallas Boxing Club and the Nakuru Boxing Club, each of which produced some of Kenya's finest boxers to date. Stephen Muchoki, gold medal winner in the light flyweight category during the 1974 Commonwealth Games, and Philip Waruinge, who won silver at the 1972 Olympics, belonged to Dallas and Nakuru respectively.

So how did Mandonga manage to rabble-rouse and rally so many Kenyans who, weeks before, were not even aware of the planned fights?

The boxer, well known for his hyperactivity and loudmouth, had been doing rounds around Nairobi since landing a few days before the fight. Seen in the video below touring one of Kenya’s largest second-hand clothes markets — Gikomba — where his opponent Wanyonyi is based, Mandonga went all out in his publicity for his own fight.

It's funny how Karim Mandonga went to Gikomba to face off Wanyonyi.

He must be a staunch fan of the great @AFCLeopards

A darling to the media for his quips, Mandonga tactics are reminiscent of the legendary Muhammed Ali —  arguably one of the greatest boxers and sportspersons of our time. Ali started hyping his fights after turning professional in 1963 as he prepared to face Sonny Liston. His frequent outbursts were a way of getting his opponent’s head and earned him the moniker “The Louisville Lip.” Fast forward to 2022-23, Mandonga almost single-handedly promoted the bout which was part of six fights on the cards for the night featuring Tanzania and Kenyan boxers.

In the 1960s and 70s, boxing was a major sport in Kenya. Pioneers such as the late Philip Waruinge won the Val Baker Trophy, which is awarded to the most outstanding boxer of any Olympic Games, during the 1968 Games in Mexico. In the 1980s, Kenya’s boxers were some of the most fearsome fighters in the ring, bringing fame to the country during the 1987 All-Africa Games. The national team popularly known as the ‘Hit Squad’ won eight out of a possible 12 gold medals. This culminated in Kenya winning Africa's first-ever gold medal for boxing at the Olympic Games in 1988 in Seoul, South Korea, courtesy of the late Robert Wangila Napunyi. However, since the 1990s, Kenya and African states have not enjoyed the same success in the boxing arenas both at continental and international games.

In the mid-2010s, professional boxing saw a brief resurgence in Eastern Africa after betting company Sportpesa sponsored the Kenya National Boxing League. However, after the withdrawal of Sportpesa’s monies in 2019, the sport has been struggling to get back to the mainstream. The COVID-19 pandemic exacerbated the situation. Boxing federation and promoters have been putting together fights to bring the sport back to its glory. Working in Kenya and Tanzania, their efforts seem to be slowly bearing fruit.

The Mandonga versus Wanyonyi bout, initially a curtain-raiser, became the main bout, pushing the other fight — in which Kenya’s Rayton Okwiri triumphed over Tanzania’s Ally Ndaro — to play second fiddle.

Kenyans on Twitter were abuzz with reels before and after the fight.

Michelle Katami, a sports producer with BBC, described the feeling in the crowd during the weigh-in of Mandonga and Wanyonyi:

Karim ‘Mtu Kazi’ Mandonga has arrived for the weigh in….. He is good vibes and hype… pic.twitter.com/OAcH0cKjhX

Stephen Ochieng, a sports writer with MozzartBet, captured the crowd at capacity, which largely came due to Mandonga’s hype:

This Mandonga guy is more of a comical commentator than a real boxer. He is giving Arap Uria a run for his money. What if Wanyonyi (not Yehovah) offers him a quiet technical knockout? Kenya Boxing Federation needs to keep #Mandonga as a promoter of boxing in Kenya pic.twitter.com/YAcCy3a4ut

Terence Creative, a Kenyan content creator on YouTube and other social media platforms was quick to notice this trend and imitated Mandonga's way of speaking in a comical video that had 58,000 views by Jan. 19.

#MandongaMtuKazi should be made the ambassador of boxing in Africa. He loves his job and he loves boxing. Companies it is also the time to use #MandongaMtuKazi to advertise and promote your businesses!

Mandonga has mixed SPORTS and ART, it has given birth to smoke. The smoke also spits out opportunities. All the best rock #Mandonga

Translation:  “If there is a possibility, Tanzanians are to show up at Mwalimu JK Nyerere Airport to receive Mandonga. He deserves respect.”

Skills and beauty of boxing. Professional boxing remains a crowd favourite across the world. In Kenya, the recent Mandonga fight has helped rejuvenate the sport realized to the benefit of both boxers and their fans.