One-women-orchestra promoting the music of Lipka Tatars and Karaims 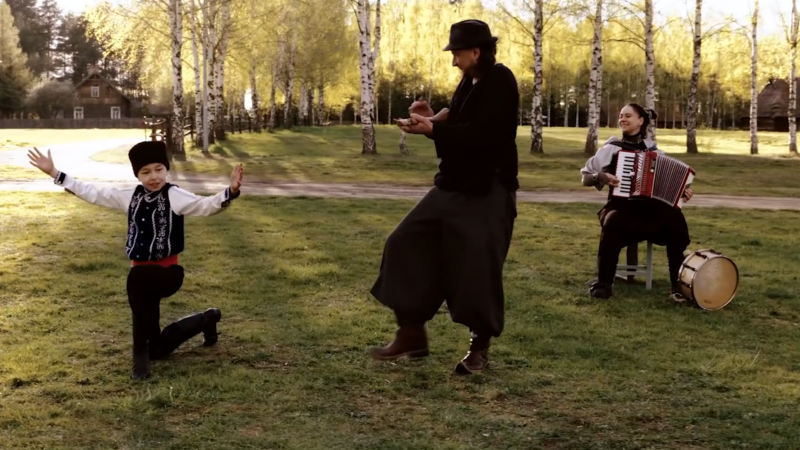 Polish folk artist Karolina Cicha, singer, composer, multi-instrumentalist, and one-woman-orchestra is trying to use the language of music to overcome historical prejudice toward minority groups in Europe. In this interview  with Global Voices, she explains why she performs the music of minorities in Poland, either alone or with her fellow artists.

For many minority groups, being othered is a familiar experience. But music can offer a path toward intercultural dialogue and cross-cultural perspective sharing. Because music is often a key cultural and national identifier — consistent across generations — music can preserve cultures and prevents their unnatural assimilation amid prejudice or discrimination from the majority.

Everything I have to say about it is somewhere between the melodies. Music speaks more than words. It is the language of emotions. She is beauty. You have to go to a concert or listen to an album [in order to understand it].

These humanizing efforts are in line with the thinking of German “philosopher of existential pessimism” Arthur Schopenhauer, who suggested in his “The World as Will and Representation” that music is a universal language that can reveal our inner selves and desires and can be a language of comprehension and acceptance, helping us to avoid falling into prejudice and to protect ourselves from eternal suffering.

Through her music, Cicha highlights the multidimensionality of Polish and East European culture. In 2017, together with Bart Pałyga, she recorded the album Tatar Album (Płyta Tatarska), with songs by the Crimean and Volga Tatars, which pulled from 1397 traditions and sounds, when the first mention of the Tatars in the Grand Duchy of Lithuania dates back.

The Tatars, specifically Lipka Tatars, have been part of the Polish landscape since the 14th century. Like many of their kind, Lipka Tatars were part of the bigger Turkic Muslim family, writing in Arabic script, and speaking Tatar, however, during the assimilation processes in Poland (through so-called Polish-centrism), much of this culture and history was lost — though activists and artists have started to revive the Tatar heritage in recent years.

Karolina Cicha, who was born in Poland’s region Podlasie, discussed why she is drawn to Tatar music:

Many Tatars live in my home region. They moved to Poland over 600 years ago, grew into Polish culture and at the same time did not forget about their identity and Islam.

However, even before this album full of Tatar music, Karolina recorded another album Wieloma językami (Nine Languages), which featured songs from other Polish minorities, such as Belarusians, Lithuanians, Russians, Ukrainians, Jews, Roma, and two songs of the Tatar national minority.

However, she is not done discovering the sounds of minorities. In August 2022, she came to Czech Plzeň Old synagogue together with Patricja Betley and Karolina Matuszkiewicz, in traditional national dress, to present the songs of the Karaims (the only Turkic minority who profess Judaism). 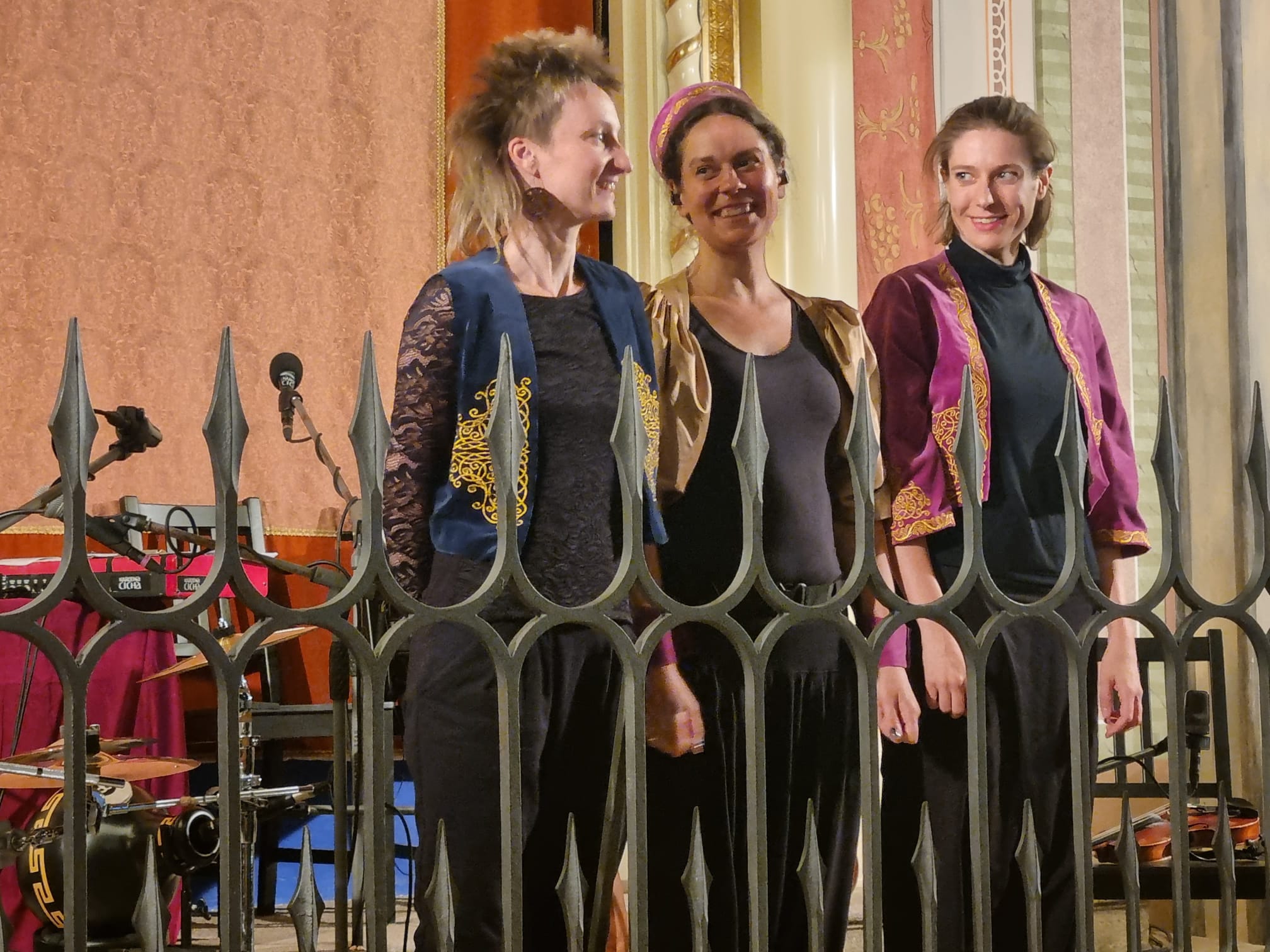 from the left Patricja Betley, Karolina Cicha, Karolina Matuszkiewicz during their performance of Karaim music in Old Synagogue in Plzen, photo by Elmira Lyapina, used with permission.

…When it comes to the Karaites, this minority is also present in Poland and very dynamic in terms of organization. It was the Polish Karaites themselves who asked me to arrange and develop their music.

Karolina does not simply introduce the music of minorities — she also sings in their languages:

I am very interested in minorities, hence the desire to learn the phonetics of languages. While learning the language, you must also learn about the culture and view of the world of a given minority.

When introducing the musicians at the Karaims music concert in Plzeň Synagogue, the third secretary of the Lithuanian embassy to the Czech Republic, Kristina Baubinaitė, noted that UNESCO considers the language of Karaites as severely endangered, praising KArolina's role in the process of its preservation. In 2021 Karolina published an album full of Karaim music called Karaimska mapa muzyczna.

This Polish musician is also conducting intensive research on the artifacts, sounds, and histories songs in the other languages; for example, for Tatar Album, she visited Crimea, Tatarstan, and Kazakhstan.

I have been traveling abroad with the music of minorities living in Poland since 2014… The story about the context of the song is a very important element of each concert. I prepare them separately. The presence of some songs is important precisely because of this context, which says a lot about the struggles and sufferings of a given minority. Many people find compassion in this and allow them to see their country and their lives with a larger perspective.

Through these performances, she tells the community's stories: introducing the minority group, highlighting the main elements of the music, sharing the community's goals and its representatives, and teaching the public about the song's composers or creators. Her Tatar Album included pieces of Crimean Tatar songs, such as Ey Güzel Qırım. This piece explores a tragic page of Crimean Tatar history — the mass deportation from Crimea in 1944 — as well as stories of Karaims who started to move from Crimea to Lithuania and Poland in the 14th century, continuing into the 19th and 20th centuries.

We usually meet with a good reception of our music. People are often surprised that in a Slavic country there are minorities originating from the Turkic language group. The presence of Belarusians, Ukrainians, or Lithuanians in the region is hardly surprising, but few people know about Tatars or Karaims, even in Poland itself

When Cicha is asked what she enjoys the most about this kind of music, she replies within Schopenhauer’s realm of musical universalism:

I have no musical education. I am self-taught. I learned everything by ear like village musicians… In music, I'm interested in universal emotions and how they manifest themselves through a local song. I don't limit myself to world music. For example, I have just recorded the album ‘SAD’, which I co-create with Sw@da, who is the creator of electronic music.

According to Schopenhauer, even artists are not protected from life's suffering. However, the remuneration for the artist is the pure, true, and profound knowledge of the inner nature of the world.

To listen to Karolina Cicha's music and celebrate the diversity of musicians, culture, and languages in Poland, check out Global Voices’ Spotify playlist here.