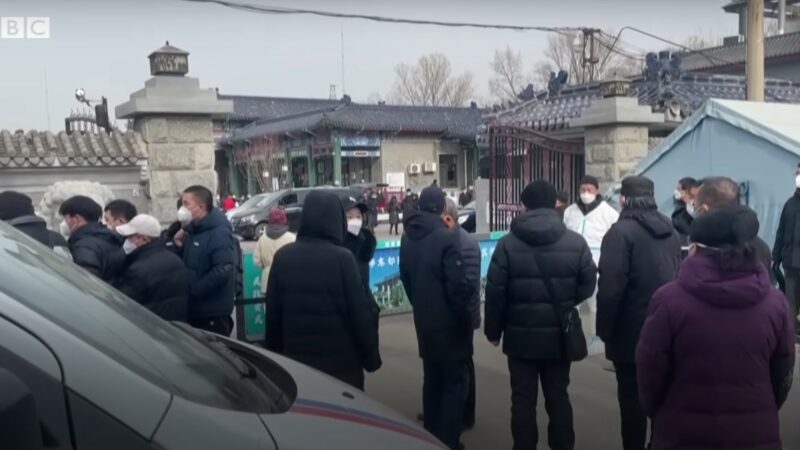 People queue up outside a funeral home in Beijing. Screen capture from BBC Chinese News on Youtube.

China’s health authorities announced on January 14, 2023, that after loosening COVID-19 restrictions on December 8, China recorded 59,938 COVID-related deaths in hospitals as of January 12.

Many are skeptical of the figure, given the visible strains on the country's medical and funeral systems in the past few weeks. The number also does not match the death rates in other countries. According to John Hopkins University's Conorvairus Resource Center, the number of deaths per 100,000 people varies between 334.05 (US) to 50.07 (Japan). As local research claims that 900 million among China's 1.4 billion population has already been infected with COVID-19 thanks to the tsunami outbreak, the death toll could be ten times more than 60,000.

Previously, the officially announced death toll was just 37 since the policy U-turn in early December to early January, and a total of 5,241 since the beginning of the pandemic in 2019. The new figure came after the World Health Organization (WHO) reiterated the need for China to share more data on its nationwide COVID-19 outbreak.

China's original claim that only 37 had died one month after the zero-policy U-turn was heavily criticized as a head-in-the-sand approach toward the tsunami-scale outbreak. Among those who lost family members to COVID in mainland China, the figure is a bitter joke:

Given that Chinese authorities reported only 37 covid deaths between Dec 7 and Jan 8, my extended family there suffered about 5% of all such death nationwide during that time. Sad https://t.co/oR2aeq7Vhj

Even after the update of the official figure on January 14, very few find it trustworthy. Wang Yaqiu, a senior researcher from Human Rights Watch (HRW), said:

The death toll of 37 was too unbelievable, so the CCP now came up with the number 60,000. 60,000 might sound less farcical, but it is equally meaningless in the sense that it is still a political number, not an effort to be truthful. https://t.co/JRGjcuCRfU

Hu Xijin, a  top propagandist from state-funded Global Times, attempted to address the public scrutiny by stressing that the figure only includes death recorded in hospitals:

The actual COVID-19 death toll in China since early Dec. will definitely be more than 60,000, because the official data only counted deaths at hospitals. But it will also be far lower than the most pessimistic estimates. Some southern parts of China have seen very few deaths. pic.twitter.com/ReR7qjIkMQ

The argument was not persuasive for those familiar with China. As many pointed out, including prominent Chinese blogger Fangshimin, there are a total of 35,519 hospitals and 973,265 grassroots-level medical facilities across the country. The 60,000 figure implies that, on average, there was fewer than two COVID-related death per hospital between December 8 to January 12.

One Weibo user mocked the official data by putting them against the context of the country’s administrative divisions, which are governmental units for the development of infrastructure, including medical facilities:

China has a total of 2,843 county-level administrative divisions. [The figure] implies that, on average, each governmental division only recorded 21 deaths among all its hospitals [during the month-long period]. It seems that it would take a lot more time for us to upgrade our country's infrastructure — with merely 21 extra deaths in one division per month, the mortuaries in all hospitals were all full, and [the dead] have to queue up for the funeral homes.

Because the official figure is suspiciously low and no one knows exactly how many people have died, some have attempted to estimate the scale of the pandemic catastrophe through other means.

On Weibo, some dug into data related to funeral facilities to reach an estimation. According to official statistics, the country has at least 1,722 funeral homes with 6,619 cremators for the cremation of 5.56 million dead bodies annually. This means, on average, each cremator handled 2.3 bodies per working day during normal times.

One Weibo user pointed out the funeral industry could have handled 200,000–300,000 extra deaths per month without facing any over-capacity problems as it takes less than two hours to cremate one body. Yet, after the lifting of COVID restrictions, long queues appeared in almost all funeral facilities across the country. Many on social media complained that they had to wait more than ten days for a cremation service.

Twitter user Xie Wanjun posted a video showing a long queue outside a funeral home at Chongming Island in Shanghai:

Some media outlets, like US newspaper, The Washington Post, have visualized the overcapacity of China’s funeral homes by comparing satellite images of the car parks and roads around various funeral homes across the country before and after the policy change:

The @washingtonpost examined @Maxar satellite imagery taken of China since December, which showed an uptick in activity at funeral homes across six different cities. pic.twitter.com/BAwacD0gFk

There are other estimations. On December 29, a UK-based health data firm Airfinity estimated that China's COVID deaths were up to 9,000 a day, and the organization expected the cumulative deaths would reach 584,000 by January 23, 2023, and rounded up to 1.7 million by the end of April, after the Lunar New Year holiday break.