LGTBQ+ people live in fear of reprisals and privacy violations 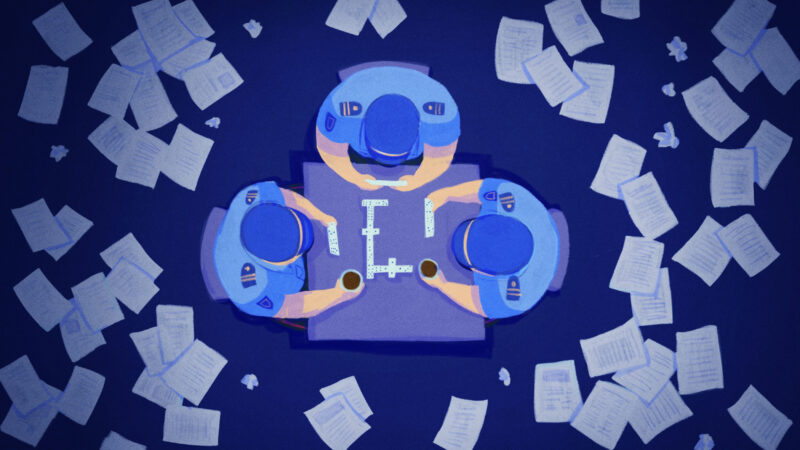 Emily Hajizadeh, a 20-year-old trans woman, feels like she is surrounded by threats. “I constantly receive threatening messages and phone calls from my family and relatives, warning me that I will be killed,” she says. “It is very upsetting, but I can't go to the police to complain about it, because I'm not sure that my privacy will be protected.”

Elnur Musayev, a social worker at the Gender Resource Center, which has provided psycho-social support to LGBTQ+ people in Azerbaijan since 2020, says that the police only take their clients’ cases seriously if someone from the center accompanies them — or if they appeal to higher police officials or publicize the case in the media.

“When LGBTQI+ people go alone to police stations, policemen ask them questions about their personal lives. These questions are not related to the person's complaint. For example, they ask ‘are you active or passive?’ or ‘do you have a girlfriend?,’ ‘does your family know?’” he says, adding they sometimes even threaten to call the individual’s family.

“This causes people to feel uncomfortable and, in many cases, they do not report to the police.”

Emily is a sex worker, which makes her even warier of the police, as sex work is illegal in Azerbaijan.

“Last time, my friend and I were chased by three people on fountain square [a prominent public square in the center of the capital Baku]. As we argued with them on the street, the police came and took us to the police station. Two of the three men who wanted to beat us ran away, and even though I told the police to bring them in, they didn't care,” she says.

In Azerbaijan, the police are often accused of harassing and even torturing citizens — a recent case renewed allegations of police brutality and violent treatment of detainees. The issue has been noted in several international human rights reports, but the government denies there is a problem.

In general, for many LGBTQ+ individuals who face discrimination and violence, there is little recourse through the police or any official judicial channels. For instance, in November 2022, a trans woman and her partner were attacked on the street in the capital, Baku. Knowing the police's poor track record with queer citizens, they decided not to file an official complaint, fearing reprisals and potential privacy violations.

The most brazen example of the state's unwillingness to help the queer community was when popular blogger Sevinc Huseynova made open calls to violence against the LGBTQ+ community on social media platforms. She was never reprimanded for her actions despite ample evidence of her encouraging people to commit violent crimes against queer people. In one of her videos, Huseynova asked local law enforcement to look the other way on cases concerning hate crimes. “A sign is enough for us, just tell us, and we, the people, will slowly shove them away,” said the blogger. In another video, she called on Azerbaijani men to kill trans women. At the time, the Interior Ministry said the ministry was aware of the videos and was investigating. But no measures were taken.

However, Huseynova is not an isolated example. The anti-LGBTQ+ narrative in Azerbaijan is pervasive among politicians, celebrities, public figures, and even opposition activists.

According to a 2021 report from the US State Department, “LGBTQI+ individuals generally refuse to file formal complaints of discrimination or mistreatment with law enforcement bodies due to fear of social stigma or retaliation. Activists reported police indifference to requests that police investigate crimes committed against LGBTQI+ individuals.”

Kamran, 26, one of the founders of the queer initiative “Q-Collective,” also struggled to get the police to take his complaint seriously after he and his friend were attacked at a bar in Baku.

“It was October of 2021, we were approached by three men as we were getting ready to leave. We did not respond to avoid an altercation,” remembers Kamran. But despite their efforts, a fight broke out. “My friend's nose was broken, we were both beaten badly. I received injuries to my eyes and chest.”

Police idly stood by and watched as Kamran and his friend were beaten. The officers refused to help, saying the area was not under their jurisdiction. When Kamran and his friend were finally able to file a formal complaint, their ordeal was far from over: someone from the forensic department informed their families about the incident and outed their sexual orientation.

The situation is even worse for LGBTQ+ minors, who are often sent back to their abusive families or partners in situations involving civil disputes or abuse, notes Musayev, the social worker at the Gender Resource Center. Generally, help only is provided when activists get involved and start publicizing the abuse, explains Musayev.

The lack of legal remedies only exacerbates the situation. Currently, existing legislation in Azerbaijan does not address hate crimes based on gender identity or sexual orientation. According to a report by the Danish Institute for Human Rights, Azerbaijan does not have national policies protecting LGBTQ+ rights. There are also no specific institutions fighting discrimination on the grounds of sexual orientation or gender identity:

Article 109 of the Criminal Code sets forth penal sanctions for the persecution of groups or organisations on political, racial, national, ethnic, cultural, religious, or sex or others prohibited by international legal norms. Persecution is understood as “crime against humanity” in terms of for example torture and deprivation of liberty against international norms. Hate crime in itself does not qualify as persecution under this provision. 37. There are no other provisions in the Criminal Code relevant to hate crimes against LGBT individuals.

In the absence of such basic protections, the work and activities carried out by LGBTQ+ activists are limited in scope and impact, given the political and social environment. Victims of abuse and harassment are left to their own devices, fearing for their lives, just like Emily.