It is not clear under what legal provisions they were detained 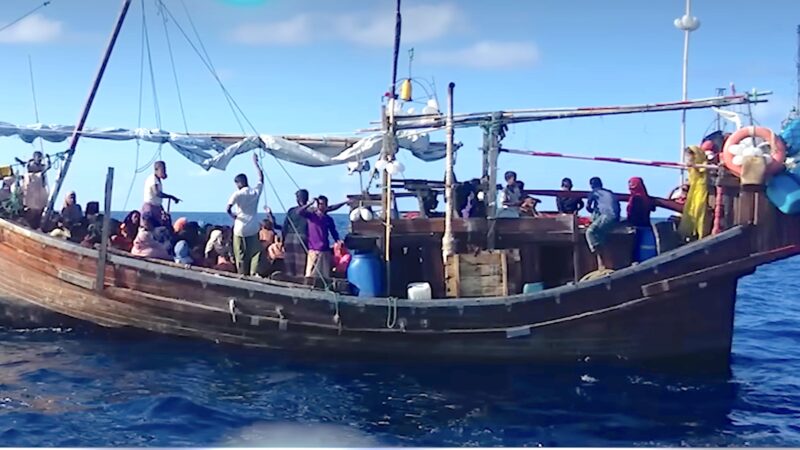 This article by Ruki Fernando was originally published in Groundviews, an award-winning citizen media website. An edited version is published here as part of a content-sharing agreement with Global Voices.

On December 17, 2022, fishermen in northern Sri Lanka alerted the navy about a boat in distress adrift in the sea. On December 18, the navy rescued a group of 104 people from the boat. The navy has referred to them as Myanmar nationals while a statement from the United Nations High Commissioner for Refugees (UNHCR) refers to them as Rohingya refugees. The Rohingya Muslims are stateless and many have fled and continue to flee from persecution in Myanmar. Many Rohingya refugees are also reported to be leaving refugee camps in Bangladesh because of overcrowding and lack of facilities. In December, there were alarming reports of deaths at sea of Rohingya refugees despite prior appeals, including from the United Nations, to nearby states to rescue them.

The rescued people were handed over to the police, produced before the Mallakam Magistrate (in the Jaffna district) and detained as “suspects” in the Jaffna prison. It is not clear under what legal provisions they were detained or what crime they (including children) were suspected of, especially since they had not landed illegally or even tried to enter Sri Lanka illegally but had been brought in by navy personnel who had rescued them from a boat in distress. A navy spokesperson is reported to have stated that “this is not a criminal act.”

On December 22, they were brought to Colombo and are being detained at the Mirihana and Welisara Immigration Detention Centers.

When I and some religious leaders visited the Mirihana Immigration Detention Center on December 26, we were politely informed by staff and policemen on duty that visitors were not allowed, and only immigration officers could make that decision. But they called the immigration officer in charge, who spoke to us on the phone. He said visitors were not encouraged but told us to come the next day when he would also be around. We did so and were allowed to distribute food items and toys. We had brief conversations with a few refugees across a closed barbed wire fence and a gate in restricted circumstances. The language was a major challenge as only one person spoke basic English. We were told that the group had left a refugee camp in Bangladesh and got into the boat on December 3, and were at sea until they were rescued. All of them had received refugee certificates from UNHCR while they were in the refugee camp but some had been lost during their ordeal at sea.

UNHCR was doing individual interviews when we visited Welisara on December 27. ICRC personnel were also there at the time. Only two priests were allowed to talk to the 20 women refugees there. The two Rohingya refugees who had come from Panadura in western Sri Lanka to talk to the new arrivals were disappointed. It was not clear if this was the general rule or whether it was due to us going there when UNHCR was doing intensive interviews.

However, security personnel provided us space at the reception area to talk freely to the Pakistani refugees (whom I had met earlier) at the same detention centre. We heard that there were a few refugees from Pakistan in Welisara, including a family of four who had been in Sri Lanka since 2006.

The officials in both detention centres were cordial; they welcomed and facilitated humanitarian assistance. One officer called me later to seek support for the unique needs of a patient in the hospital, but they were not too keen to allow interactions and discouraged visitors, although they did allow us some minimal interactions. This is surprising since even suspects of crimes in Sri Lankan prisons can receive visitors six days a week.

The decision and actions of the navy to rescue and disembark those in distress are admirable, especially in comparison to the reluctance of other Asian states to intervene for many days and weeks. However, if access to visitors is restricted, and if the Rohingya refugees continue to be detained, the appreciation earned by Sri Lanka may evaporate into familiar expressions of concern and condemnation.

Efforts of MSEDO and others to provide immediate humanitarian aid are acts of solidarity towards a community in distress. Two Sri Lankan children donated a significant amount of their toys to the refugee children. The most inspiring and moving experience was when I met some Rohingya refugees already in Sri Lanka who had seen the news, found the Mirihana Detention Center after much effort and visited the newly arrived refugees with some provisions. When they were asked to come back the next day, they did so. When they heard we were visiting the Rohingya women and girls in Welisara, they wanted to come along.

Visits by Rohingya refugees in Sri Lanka, religious leaders and others must be encouraged because they will provide moral support to refugees, generate more humanitarian help and promote empathy and sensitivity amongst Sri Lankans.

In the short term, I hope the Sri Lankan state will continue the good work initiated by the navy and, with help of generous citizens, provide these people who had suffered much with decent housing instead of detaining them like suspected criminals. Without housing, their release from detention will not be meaningful since they have nowhere to go except the streets. They must also be provided adequate food, mental and physical healthcare and security. In the midterm, the state must enrol Rohingya and all refugee children into the free education framework and provide adults with opportunities to be engaged in productive livelihoods. In the long term, the state must provide the option of permanent resettlement and citizenship in Sri Lanka to those who may be keen. When we asked some other Rohingya refugees who have been in Sri Lanka for about five years and were still stateless whether they would like to permanently resettle in Sri Lanka, they immediately said yes, adding comments about Sri Lankans who had been nice to them.

The government has agreed to facilitate UNHCR to carry out its mandate in favour of refugees through an agreement in 2005. Procedures in terms of issuance of asylum and refugee certificates by UNHCR in Sri Lanka to foreign nationals seeking refugee status in Sri Lanka are elaborated through a Terms of Reference signed by the government and UNHCR in 2006. Those possessing asylum or refugee certificates are not usually arrested and detained unless they are suspected to have committed a crime.

Most asylum seekers enter Sri Lanka through immigration counters at the airport. There have also been previous occasions of Rohingya refugees being rescued in the sea and brought to Sri Lanka by the navy and whose claims were subsequently processed by UNHCR, after which many had gone to other countries for permanent resettlement. There were about 36 Rohingya refugees in Sri Lanka before the latest group came and they include the 31 whose house was attacked in a Colombo suburb by thugs in 2017 and who had to be relocated.

For more information about refugees in Sri Lanka, see here and here.