What are the most popular narratives in India? 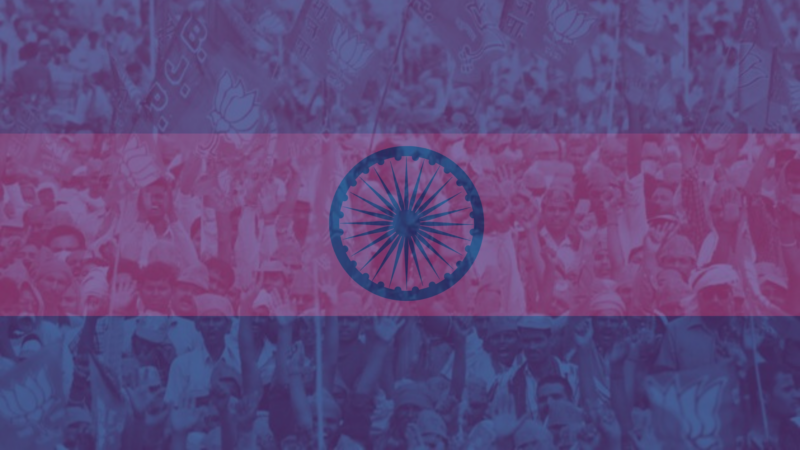 This story is part of Undertones, Global Voices’ Civic Media Observatory‘s newsletter. It features a summary of a year-long research on Indian media ecosystems and what we can expect in 2023. Whenever you click on a hyperlink in the text, you will see the narrative and media posts upholding it. Subscribe to Undertones.

Far-right Hindu narratives have become more mainstream and brazen in the last year, and our researchers believe this trend will continue in 2023. Hindu supremacy politics rely on Islamophobia to exist. Anti-Muslim sentiments that are expressed in digital spheres will probably continue to be translated into discriminatory policies and physical violence in the offline world.

Hindu nationalist narratives dominate the political and mainstream media discourse in India, but the Observatory’s researchers set out to trace the roots of radicalization in online spaces. They went undercover, using aliases that would appeal to Hindu nationalists, to infiltrate private Facebook groups, Telegram channels and WhatsApp groups, and to observe far-right Hindu echo chambers. They complemented their research by analyzing trending media items and by paying attention to offline narratives proliferating in their social circles. The fruit of their research reveals the workings of online groups that are moving the public discourse to the right.

When Narendra Modi became Prime Minister in 2014 with the powerful Bharatiya Janata Party (BJP), Hindu-centric narratives took center stage in mainstream media. The BJP came to power by saying that “Hindus are demographically and culturally threatened by Muslims,” even though nearly four out of five Indians identify as Hindu. Figures aside, both Hindu and Muslim Indians, alongside other religious minorities, have contributed for centuries to build the melting pot of cultures that India is today.

As India is home to dozens of cultures and languages, the BJP has used “Hindutva” to cast a wide net for Hindu voters. Hindutva is an ideology that fuses Indian and Hindu identities to create an ethnoreligious state and actively discards India’s secularist values that are enshrined in the constitution. Hindutva is the belief that India is inherently a Hindu nation, and this narrative poses a risk of ethnic cleansing to Indian Muslims and other minorities. Centering Hindu supremacy, and its corollary, Islamophobia, is also politically convenient in concealing the country’s economic or political issues.

These narratives are found in their strongest versions in the online world, such as in Telegram channels or Facebook groups. The content is recycled upstream, finding its way to disinformation pages on Facebook, and landing on mainstream television channels. It is worth mentioning that the BJP's grasp on power hinders the development of a credible political opposition and the free press, so there is not much room for diverse content and narratives. Critics and journalists who express different views than those of the government are dubbed anti-national.

In the interactive chart below, you can see the relation between the major themes we have studied and overall narrative frames. For example, the situation in Kashmir is mostly related to pro-authoritarian narratives, along with pro-Hindutva and anti-Muslim sentiment.

Hindutva also has the potential to spill over and encompass expansionist ideologies. After Russia attacked Ukraine, the same groups that promote Hindutva immediately shared narratives about a “United India,” which would englobe other South Asian countries — particularly Pakistan — and the disputed territories of Kashmir. This discourse was trending in India and could potentially be reignited by future triggers.

Modi and other politicians like Yogi Adityanath who push for Hindutva are seen as alpha male leaders who can make India a world superpower and lead the country to “prosperity.”

Islamophobic online discourse has direct physical consequences. Mob violence against Indian Muslims has been on the rise, and mosques are at risk of being converted into Hindu temples. Even the Taj Mahal has been targeted for a Hindu makeover. State authorities sometimes demolish Muslim-owned mom-and-pop businesses, especially in New Delhi and Uttar Pradesh in what is called “bulldozer justice.” The media also casts a negative light on inter-religious romantic relationships, especially when the man is Muslim and the woman Hindu, claiming that women are being forced to convert to Islam in an act of “love jihad.”

“The BJP has used the term ‘love jihad’ to instill fear in Hindus, convincing them that Muslim men were trying to bring a demographic change by marrying and converting women from their community. This rhetoric has gained more popularity in 2022. With 2024 general elections coming up, we can expect that the love jihad rhetoric will translate into anti-conversion laws in more Indian states,” our researcher Ananya says.

Similarly, media reporting on the well-being of women solely focuses on Muslim women, who would need “to be saved from the oppressiveness of Islam.” This image is constructed in opposition to the image of a liberated and empowered Hindu woman. The media peddles harmful narratives such as “Muslim Indians are violent and uneducated.” These narratives culminate to influence the public discourse around anti-Muslim policies.

See our newsletter on how India’s far-right spreads Islamophobia

In 2023, India will host the G20 Summit in New Delhi. The event will probably boost pro-Modi narratives that paint the Prime Minister as a superhero on the global scene and the BJP as India’s savior. There will also be key legislative elections in 10 states, which might see a hardening of narratives that portray Indian Muslims as outsiders.

“Even though Modi will maybe try to clean up his image internationally, a common narrative is that India is a sovereign nation and usually has the ‘no one can tell us what to do’ attitude,” Setu Bandh Upadhyay, our researcher, says.

Another researcher, Shubhangi Heda, adds that “India is a big economic market and is seen as a stable government in South Asia to do business with, particularly with Silicon Valley.” This means that despite the hardening of these harmful narratives and an emboldened right-wing population that is flaunting minority rights, Modi, his government, and his followers might get away with what they are doing.