Elected for the third time, leftist went from prison to the presidency in four years 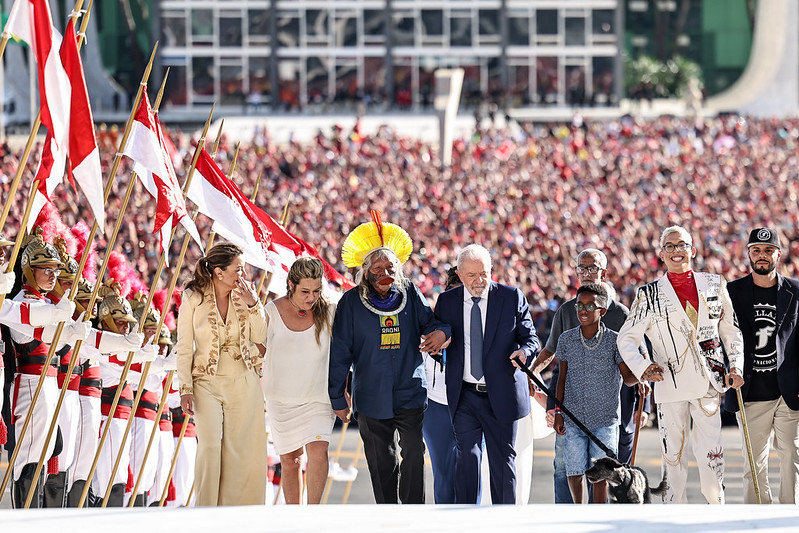 Lula goes up the ramp of the Planalto's Palace, accompanied by a group representing the diversity of the Brazilian people  | Photo: Ricardo Stuckert/Used with permission

On Jan. 1, 2023, Luiz Inácio Lula da Silva went up the white ramp of Planalto’s Palace, the official presidential office in Brasília, for the third time in his life, flanked by a group representing the diversity of the Brazilian people — from 90-year-old Cacique Raoni, a historical Kayapó Indigenous leader, to 10-year-old Francisco, a young Black athlete from São Paulo’s periphery.

In the absence of former president Jair Bolsonaro, who left the country, the sash was passed hand-by-hand among the group, eventually being given to Lula by a Black woman, 33-year-old Aline Sousa, from a third-generation family of waste pickers.

In an image for the history books, also present were disabled and anti-ableism activist Ivan Baron, metalworker Weslley Viesba Rodrigues Rocha, cook Jucimara Fausto dos Santos, teacher Murilo de Quadros Jesus, and artisan Flávio Pereira. Resistencia, the stray dog rescued by Lula's wife, Janja, after showing up in the vigils held in front of the building where Lula was imprisoned, was included as well.

This third time around for Lula marked a historic comeback for the 77-year-old. He went from spending 580 days in prison after being convicted of corruption charges, to his sentence being annulled, to securing a close victory over a far-right president in a deeply polarized election, all just 12 years after leaving the presidency.

Lula's campaign gathered parties from different political spectrums, which now have to be accommodated in the new government, which has already been presenting both challenges and criticism.

In the two speeches given during his inauguration, attended by over 100 representatives from foreign countries, Lula stressed the importance of democracy and the fight against hunger and deforestation, and promised to hold people accountable for their actions following the rightful legal procedures and the right of defense.

In the space of six years, Lula went from a disgraced politician watching his ally, Dilma Rousseff, suffer an impeachment, losing his wife of over 40 years and facing prison, to winning a third presidential term.

Born in a poor region in the northeastern state of Pernambuco, Lula migrated to São Paulo with his family, along with thousands of other Brazilians known as “retirantes” back in the 1950s. As a young metalworker in the late 1960s, he joined the union and started his political life, participating in strikes and movements while the country was still under a military dictatorship (1964–1985).

In 1980, with Brazil opening politically he was arrested by the dictatorship, after massive strikes in the industrial ABC region of São Paulo. Almost a decade later, in 1989, in the first election held after the military coup of 1964, Lula went to the run-off against Fernando Collor de Mello, who eventually won, having used the fact that Lula's daughter had been born out of wedlock to discredit him. Collor de Mello resigned when he faced impeachment three years later.

In 1994 and 1998, Lula lost two other elections to two-term president Fernando Henrique Cardoso, a sociologist who helped implement the Brazilian currency real and re-election, which was previously prohibited for consecutive executive terms.

In 2002, running for the fourth time, Lula tried to change his image from that of a radical leftist union leader to a more conciliatory politician. He won his first term, despite his opponent José Serra's campaign of “fear.” Four years later, he was re-elected with 58 million votes and, in 2010, helped to elect his former minister, Dilma Rousseff, as Brazil's first woman president.

Lula became a target of investigations in 2016 and was convicted for the first time the following year. The main charges against him were based on real-estate properties that prosecutors believed to be the product of bribe.

By May 2018, he was arrested, under the interpretation that people convicted after two rulings could be imprisoned even while appealing. Once a Supreme Court ruling changed the “second instance arrest” interpretation. However, Lula was released in November 2019.

The following year, the Supreme Court voted to annul the sentences convicting the former president, saying that the cases shouldn't have been judged in Paraná state, and considering Judge Sergio Moro biased. Telegram chats between Moro and the prosecution, leaked by a hacker, were published in a series of stories by The Intercept Brasil and partnering outlets.

Yet, even though he is considered the most popular president in Brazil‘s history, garnering an 87 percent approval rate by the end of his second term, a significant portion of Brazilians regard him as populist and corrupt.

One of the founders of the Workers’ Party, Lula never changed his political allegiance. In contrast, Bolsonaro passed through nine parties during more than three decades of his political career.

PT, as the Workers’ Party is known, is the second largest and the main left-wing party in Brazil, encompassing people who opposed the military dictatorship, Liberation Theology -oriented Catholics, union workers, intellectuals, and artists. Under Lula and Dilma's governments, however, it became tainted with corruption scandals, even though the cases also involved other parties, from different political spectrums.

By the end of 2021, a poll by Datafolha Institute showed the Workers’ Party was the favorite of 28 percent of Brazilians, its best performance since 2013.

In 2006, the year he was elected for a second term, Lula claimed his government wasn't leftist, even though he considered himself to be one. In 2022, before being elected for the third time, he defined himself as a “refined socialist, who believes in private property, freedom of organization, and the right to strike.”

Lula's new government must now find a place for the parties that supported him throughout his campaign, as well as others that helped to pass a bill to expand public spending during the transition between governments, a reality rife with challenges and controversies.

While some bolsonaristas (supporters of Bolsonaro) were protesting in front of military units, believing the inauguration was a fraud, Justice Minister Flávio Dino's views on how to dismantle the movement are said to be clashing with those of Defense Minister José Múcio, who called the protests “democratic.”

On January 8, a week after the inauguration, bolsonaristas stormed and destroyed public buildings in Brasília, such as the Supreme Court, the National Congress, and Planalto Palace, the presidential workplace.

Lula published a joint statement with presidents of the Senate, the House, and the Supreme Court calling the acts “terrorism, vandalism, criminal and coup,” and saying they are united to take measures.

Joint statement from the presidents of the Powers of the Republic, signed this morning, in repudiation to the coup acts yesterday in Brasília

Celso Rocha de Barros, sociologist and author of “PT, uma história” (“Workers’ Party, a history”), who stressed back in October that PT would now have to share power more than it did in previous administrations, wrote after the inauguration:

We still don't know if, in the government, Lula will know how to balance, like he did in the inauguration speeches, policies requested by the amplified front and what Lula himself has promised to the most faithful of his followers. The fight against poverty, the main subject in the speeches, can be a unifying program to an “amplified front against inequality.”