Jimmy Lai can't get an overseas lawyer to defend him 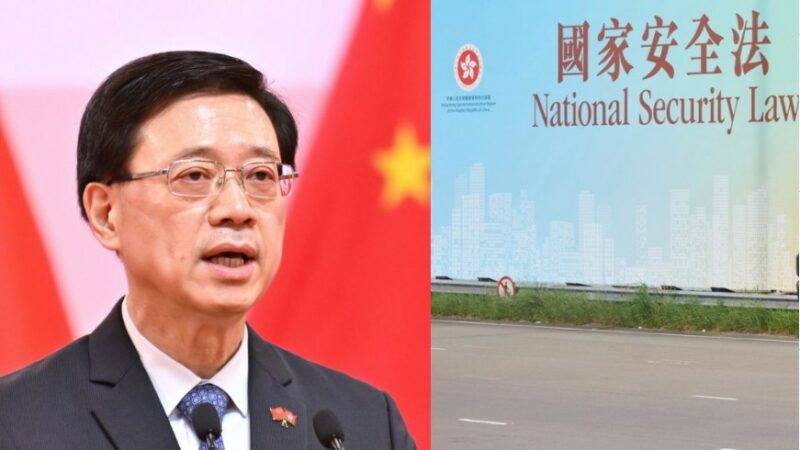 Images for the press from Hong Kong government information office. via HKFP

In November 2022, the Hong Kong government appealed to Beijing for “interpretation” assistance of the NSL after a failed attempt to block British barrister Tim Owen from defending media tycoon and pro-democracy activist Jimmy Lai on foreign collusion charges. The city’s top court dismissed the government’s claim that the presence of overseas lawyers would defeat the purpose of the NSL, namely preventing foreign interference.

The NSL was inserted into Hong Kong's Basic Law by NPCSC on June 30, 2020, as a legal tool to crack down on political dissidents after the 2019 anti-China extradition protests, which was defined as a pro-Hong Kong independence movement. The NSL defines four kinds of criminal acts — secession, subversion, terrorism, and collusion with a foreign power — in vague terms that can criminalize a wide range of speech and protest acts and has been used to shut down the pro-democracy newspaper Apple Daily and arrest 47 activists who participated in the primary legislative council elections among pro-democracies.

The Hong Kong government initially asked Beijing to clarify the NSL and assert that the existing local law and practice that allow the appointment of foreign lawyers in national security trials were inconsistent with the NSL so that the administration could override the local court’s ruling, according to article 62 of the NSL.

However, Beijing did not impose a strict ban on foreign lawyers from being involved in national security cases. Instead, it took a sweeping approach by giving the CE and the CSNS the power to further intervene in the court’s proceedings on crimes that endanger national security or pose a national security risk.

First, the NPCS reinstated the need for local courts to obtain certificates or directives from the CE when handling national security cases, according to article 47 of the NSL. The involvement of overseas lawyers in trials related to national security falls into this domain and thus must obtain approval from the CE.

The NPCSC also specified that if the courts made decisions without obtaining directives from the Chief Executives, the CSNS could step in to make an evaluation and decision according to article 14 of the NSL. This means that it has the power to override the court’s decision, and its actions cannot be challenged by judicial review.

The most alarming interpretation, as highlighted by legal experts from NPC Observer, is that the NPCSC extended the duties of the CSNS to include the authority to make judgments and decisions as to whether an issue involves national security, adding that these decisions  “have enforceable legal effect.” All other public and private entities are obliged to respect and implement accordingly.

Samuel Bickett, a former human rights lawyer in Hong Kong, pointed out that after the NPCSC’s interpretation, defendants of national security trials are deprived of their basic legal rights as the CE “comprehensively holds power over both parties’ counsel, the judge, and the jury.”

The political cartoonist “Wong Sir” presents the power of the CE with his drawing:

The country's top legislature has passed an interpretation of HK's national security law, clarifying that the courts need approval from the Chief Executive, or the committee on safeguarding national security, to allow foreign lawyers to take part in national security cases here. pic.twitter.com/3pAC51mNAQ

The fact that the CSNS has the power to define whether an issue involves national security with “enforceable legal effect” that cannot be challenged by judicial review has placed the national security authority above the local legal and judicial systems. Eric Lai, an activist and human rights scholar, describes the status of the CSNS as the political-legal committee of the Chinese Communist Party (CCP) in mainland China:

My view in Reuters’s report on Beijing’s NSL interpretation: it creates a de facto political-legal committee for #HK“, as judicial independence vanishes when executive authorities can override a court decision without being challenged by a judicial review. https://t.co/8sD7r2brjV

The CCP-controlled political-legal committee oversees all legal enforcement authorities, including the police forces and judiciaries in all local administrations in mainland China. The establishment is in place to consolidate the absolute leadership of the CCP in political and legal affairs in the country.

Headed by the CE, the majority of the members in the CSNS come from the city's law enforcement units. Its current top advisor is the director of the Liaison Office of the Central People’s Government in Hong Kong, Luo Huining, who is directly appointed by China’s State Council.

The immediate effect of Beijing's interpretation is that Jimmy Lai would lose his right to hire an overseas lawyer to defend against the foreign collusion charges, which could lead to a maximum life sentence:

#HongKong authorities will pass a legislative amendment in the coming months to prevent #TimOwen from representing #JimmyLai following a decision from #Beijing. A move which puts Chief Executive #JohnLee above the courts. #FreeJimmyLai https://t.co/Dgg4OI00TV

— The Committee for Freedom in Hong Kong Foundation (@thecfhk) January 3, 2023

In the long term, the impact of the city’s judicial system can be more devastating as the definition of national security issues remains so broad and vague. Given the unrestricted power that the CSNS holds, many are worried that the “certificate” requirement will not be confined to strictly defined political trials but will spill over to other sectors, such as economic or financial crimes that involve foreign links.

In a new op-ed on Beijing's interpretation of #HongKong‘s #NSL, our CEO @benedictrogers calls on foreign judges to withdraw & for UK & others to impose sanctions

“Until now the international community has largely wrung its hands. Now it is time to act”https://t.co/HNUJfgWgkH