Mehriban Aliyeva was a UNESCO Goodwill Ambassador for 18 years 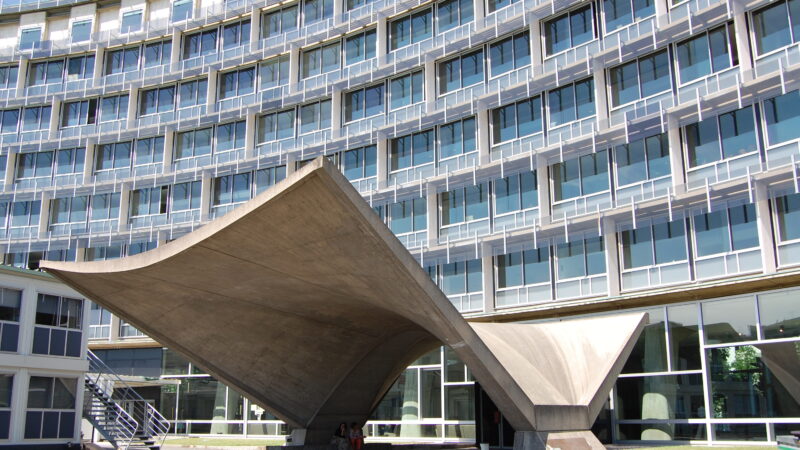 Image by Anna Armstrong. Free to use under Creative Commons License CC BY-NC 2.0

Azerbaijan's first lady Mehriban Aliyeva was awarded the title of the Goodwill Ambassador to UNESCO (United Nations Educational, Scientific and Cultural Organization) in 2004 during a visit to France with her husband, Ilham Aliyev, who was elected Azerbaijan's president in 2003 in what international observers described as a fraud election.

According to one UN definition, goodwill ambassadors are prominent volunteer individuals who are:

Celebrity and expert advocates of UNESCO (not diplomatic ambassadors) who use their talent or fame to spread the UNESCO ideals, especially attracting media attention.

Aliyeva's role as a Goodwill Ambassador for Oral and Musical Traditions won her countless accolades in the coming years. In 2008 she was awarded the Commemorative Medal by former UNESCO Director-General Koichiro Matsuura, and in 2010, the Golden Mozart Medal by Director-General Irina Bokova. Bokova, during her time as Director General, developed friendly ties with Aliyeva and the ruling family. This bond was so strong that Bokova stayed silent amid Aliyeva's problematic behavior in the coming years, including when a number of Azerbaijani civil society organizations sent a letter expressing concern about increasing authoritarianism in the state.

At the time of her appointment as the ambassador, Aliyeva was serving as the head of the Heydar Aliyev Foundation, which was established in 2004, just months ahead of the first lady's appointment as Goodwill Ambassador. The purpose of the foundation was “to study the rich legacy of Heydar Aliyev, the national leader of Azerbaijan, as well as deliver his national statehood ideas to new generations,” according to the foundation's website.

But that legacy the foundation was established to study was not necessarily one to be proud of. Heydar Aliyev, the former president of Azerbaijan, who died in 2003 at the age of 80, was a former KGB General who successfully built a cult of personality around his name. His rule was also closely associated with corruption, abuse of power, and cronyism.

His son, Ilham Aliyev, who was elected in a contested election, continued to rule in the same fashion as his father. Except bolder and more unashamed. The family name, since Aliyev's ascend to the presidential seat, would be marred in corruption scandals, gross human rights violations, and power abuse.

The ruling family uses the Heydar Aliyev Foundation as a cover for its multi-billion dollar properties and to advance Baku's narrative on the contested Karabakh region.

And yet none of this was enough to make UNESCO strip Aliyeva of her credentials.

In June 2022, during the 30th anniversary of the country's membership in UNESCO, the Azerbaijan Ministry of Foreign Affairs hailed the country's partnership with the organization. The Ministry emphasized Aliyeva's work and the foundation when commemorating the anniversary:

The exceptional merits of the First Vice-President of Azerbaijan, President of the Heydar Aliyev Foundation, UNESCO Goodwill Ambassador Mehriban Aliyeva in developing cooperation between our country and the organization, promoting the ideas and goals of the organization at the international level and within the country, should be especially emphasized. Thanks to the attention and support of the First Vice-President, Azerbaijan has made a great contribution to the promotion of UNESCO values in the fields of education, preservation of cultural heritage, restoration and protection of historical monuments in Azerbaijan and around the world, intercultural dialogue and other areas.

Five months after this statement was issued, on November 15, 2022, the first lady announced she was leaving the role. The letter said the first lady was busy with “large-scale restoration and revitalization of [Karabakh region]” following the second Karabakh war, which Armenia and Azerbaijan fought in 2020. But the resignation was not just about the first lady's busy schedule.

Immediately speculations over Aliyeva's decision made rounds in the local media. Accusations leveled against UNESCO's biased approach to Azerbaijan's cultural and historical heritage quickly followed suit. One article from December 2022 claimed UNESCO's indifference to “the looting and destruction of the material heritage of Azerbaijan” and the organization's refusal “to name those responsible for the true cultural genocide and to participate in the restoration of what can still be preserved.”

The irony of accusations, including that UNESCO was corrupt to its core and that its end was near, is paradoxical. After all, one of the countries involved in corrupting the institution was Azerbaijan itself. According to an investigation by a global consortium of journalists, between 2012–2014, Azerbaijan operated what the Organized Crime and Corruption Reporting Project (OCCRP) described as an Azerbaijani Laundromat, “a complex money-laundering operation and slush fund that handled USD 2.9 billion over a two-year period through four shell companies registered in the UK.” One of these companies paid a total of USD 468,000 to Kalin Mitrev, the husband of then-UNESCO Director-General Irina Bokova.

Azerbaijan also donated a generous USD 5 million in 2013 to UNESCO as part of the Framework Agreement on Cooperation between UNESCO and the Republic of Azerbaijan.

But while Azerbaijan insisted its heritage has been under attack for 30 years, in February 2022, it took a rather unexpected turn, when the country's Ministry of Culture announced its decision to “erase Armenian inscriptions on religious sites in the territory that it reclaimed in the 2020 war with Armenia,” on the grounds that these sites did not belong to Armenia but were instead part of “heritage of Caucasian Albania, an ancient kingdom once located in what is now Azerbaijan,” reported Eurasianet at the time.

Previously Azerbaijan was accused of destroying the Armenian cemetery of Julfa in the Azerbaijani exclave of Nakhchivan. In 2005, “hundreds of ancient cross-stones, or “khachkars,” were broken into rubble by men in military uniforms and dumped into the river,” reported Radio Liberty. The resolution adopted in March 2022 by the European Parliament also condemned Azerbaijan for this and other instances in which the country was accused of destroying countless historical sites.

Some pundits say the real reason behind Aliyeva's decision to resign from her post as UNESCO Goodwill Ambassador was to protest the recent “anti-Azerbaijan stance” by France. In October 2022 French senate adopted a resolution calling for sanctions against Azerbaijan and its immediate withdrawal from Armenian territory. The resolution also condemned Azerbaijan for its aggression against Armenia in September 2022 which left hundreds killed, says the International Crisis Group.

According to the reporting by OC Media, shortly after the resolution, which does not legally oblige the French government to act, furious Baku summoned French charge d'affaires Julien Le Lan, handing him a nota bene. Other anti-France sentiments emerged on public television, with a choir of kids singing a song insulting French President Emmanuel Macron.

In November 2022, the Azerbaijan parliament adopted a statement critical of the resolution, calling to freeze French officials’ assets and reconsider cooperation agreements with French energy companies. More critical statements were voiced by Azerbaijani lawmakers during the parliamentary debate. These statements included declaring cutting off the gas supply to France, declaring the country an enemy of the state, and recalling Azerbaijan's ambassador to France, according to OC Media.