The most popular Russian narratives 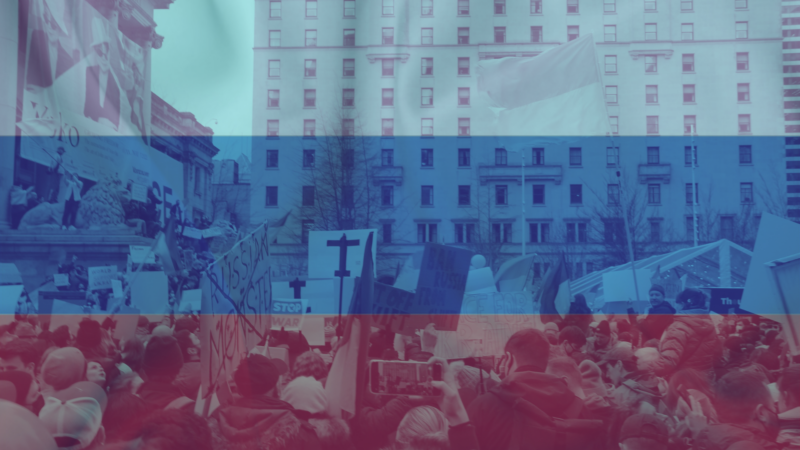 This story is part of Undertones, Global Voices’ Civic Media Observatory‘s newsletter. Russian researchers reflect on their country’s media ecosystems and what we can expect in 2023. Whenever you click on a narrative, you will be able to see more analysis and related media posts upholding it. Subscribe to Undertones.

The lives of Ukrainians changed forever on February 24, 2022, when Putin’s regime invaded Ukraine. On the other side of the border, Russian state propaganda escalated, independent media was shut down, and anti-war dissent was violently repressed. In 2023, researchers expect anti-war Russians to question more and more how Russia came to this.

The state's control over narratives

We have closely followed Russian state narratives from before the invasion, when state actors said the tensions between the two countries were made up by the West. Since the war broke out, state narratives have hardened and our researchers expect them to solidify in 2023.

Russia has used different narratives to justify the war on Ukraine. One argument, which has weakened in recent months, is that Russia is engaging in the “denazification” of Ukraine for the good of humanity. Russia has also blamed Ukraine for staging its own massacres, going as far as claiming that Ukraine would be ready to bomb itself with a “dirty” nuclear weapon just to blame Russia for it.

The most popular narrative justifies the war on the grounds of self-defense. The Russian state alleges that the West, and specifically NATO, were planning an armed attack against Russia through Ukraine, and therefore a preemptive attack was necessary. The narrative is summed up as “Ukrainians and the West were planning to harm Russia first, so Russia was forced to launch the military operation,” and has gained particular prominence since the West started providing weapons to Ukraine.

These narratives have not sprouted from just anywhere. Years of government propaganda have prepared the Russian population to vilify the West. Some of these are an expression of Russia’s pride in helping defeat Nazi regimes during World War II.

What is said on social media

Since the war in Ukraine, the Russian state has blocked Facebook, Instagram, Twitter, and 200,000 websites, which are now only accessible with a VPN. Many Russian citizens are left with only the above-mention propaganda narratives peddled on state-sanctioned media and social networks like Telegram and Vkontakte. What is said about the war, then, can vary drastically depending on whether you are checking Facebook or VKontakte.

It is difficult to know how many Russians are pro- or anti-war because of severe repression of dissenting opinions. With our data analysis, we have scraped media channels, dissected over 250 Russian media items that illustrate local perceptions, and investigated the narratives at play.

Most anti-war content is found on Facebook, Twitter, and Youtube, whereas Instagram and Telegram are polarized. Many Russians posting anti-war content are based outside the country. Sometimes, they lament the fact that Russians could not take down Putin ahead of time (“Every Russian bears responsibility for the war with Ukraine”), at other times they call Putin supporters “zombies” who are misled and misinformed by propaganda (“Pro-war Russians are ignorant and blind”). Many have started to question what it means to be Russian.

Russian anti-war resistance is strongly associated with decentralized grassroots activist movements such as the Russian feminist movement. Anti-war actions have continued within the country, despite the risks. “Anti-war groups are still decentralized, the only place they can be centralized is in jail,” our researcher says.

Many pro-war narratives can be found on state-owned VKontakte. They include the following: “Russians should be proud of their nation and of themselves” and “Failing to support the Russian government in the war against Ukraine is an act of treason.”

Putin's call for mobilization to strengthen the Russian army in September 2022 further polarized the country. Here, the narratives were also split into two, with on one side “Russians should not be scared about conscription into the army” and on the other, “Russians should resist being drafted to fight in Ukraine.”

View our newsletter on Russian influencers on the war in Ukraine

The West is scorned on either side

The Russian state and its supporters argue that NATO, which includes the United States and many European members, is an enemy seeking to attack Russia, as allegedly proven by their arms supply to Ukraine. Anti-war Russians deplore the lack of support by the West for anti-Putin activists and European arms sales to Russia up until 2021.

In 2022, there have been investigations that Finnish Nokia sold equipment to monitor protesters and that US-based Sandvine equipped the Russian state with Internet censoring technologies. Russians have also complained that the mention of prohibiting the supply of tear gas and taser shockers was only included in the European Union’s ninth sanctions package in December 2022.

“Ironically, both the propagandists and anti-war Russians are dissatisfied with the West,” our researcher says.

Anti-war Russians criticize the West’s “hypocrisy” by stating that “Western countries never tangibly supported Russia's pro-democracy movement” and that “EU countries enabled Putin and the Russian regime.” It does not seem that the West's popularity will improve anytime soon.