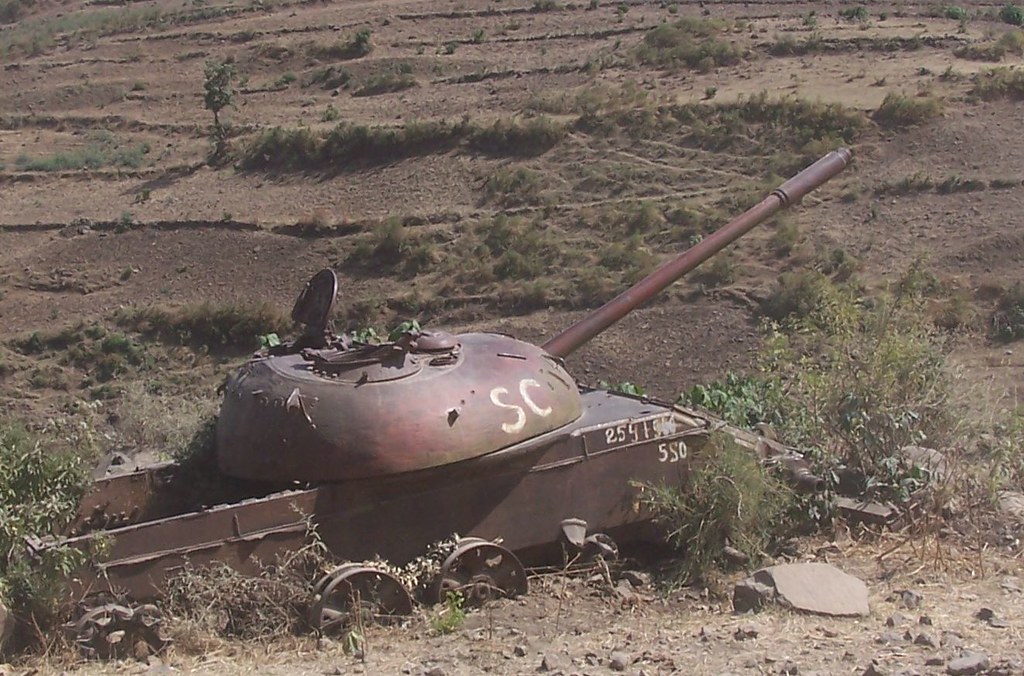 A rusting tank seen by the roadside in northern Ethiopia not far from the border with Eritrea. Its a poignant reminder of the region's still recent turbulent past. Image Source;  gordontour Attribution-NonCommercial-NoDerivs 2.0 Generic (CC BY-NC-ND 2.0)

Two years of fighting in Ethiopia is estimated to have resulted in the deaths of between 383,000 and 600,000 civilians and between 250,000 and 600,000 troops. A process of disengagement is currently underway but is far from complete. Nor is it clear that the ceasefire will hold since Eritrean troops continue to loot Tigrayan homes and businesses while killing local residents.

This war, unlike many in Africa, does not have its roots in religion or ethnicity. It was the product of tensions, which can be traced back to the nineteenth century and the imperial expansion known as the “scramble for Africa.” The Ethiopian emperor, Menelik II (who ruled from 1889 to 1913) joined European nations in vastly expanding his territory. Ethiopia was transformed from a mainly Christian kingdom into an empire encapsulating more than 80 ethnic groups, many of whom were Muslim.

This produced tensions between the center and the periphery and these consequences are still being played out. Since then, Ethiopia has been plagued by conflicts over whether power should lie with the central government, or with the regions and ethnic groups.

Eritrea, an area of roughly 117,600 square kilometers north of Ethiopia and bordering the Red Sea, broke away following a 30-year war of independence (1961-1991) and became a fully recognized nation in 1993. The neighboring region of Tigray in northern Ethiopia fought alongside the Eritreans, capturing the Ethiopian capital, Addis Ababa, with Eritrean assistance in 1991. The Tigrayans became the ruling party in Ethiopia, and transformed Ethiopia into a strong federal state, based on ethnicity. Differences with the Eritreans over ideology, strategy, and tactics festered and from 1998 to 2000 they fought a bitter border war. A peace agreement was finally signed and an international commission ruled on where the border lay, but the Ethiopian government, then controlled by the Tigrayans, refused to accept the adjudication.

This remained unresolved, with tragic consequences, as highlighted by the 2022 Bertelsmann Transformation Index report. “The border between the two countries was not demarcated due to the opposition of the Tigray regional government. Instead of demobilizing its forcibly recruited army, the Eritrean government has been engaged in an undeclared war against the Tigray People’s Liberation Front (TPLF) in Tigray alongside Ethiopian federal forces since November 2020, which has resulted in a humanitarian catastrophe.”

In 2018, the Tigrayans lost power in Ethiopia and Prime Minister Abiy Ahmed made peace with the Eritrean leader, President Isaias Afwerki. The two men shared a common loathing of the Tigrayans and plotted to destroy them as a serious force.

The war that erupted on Nov. 4, 2020 unleashed killings and sexual abuse on an appalling scale. “The Tigray conflict has been marked by extreme brutality. The gravity and seriousness of the violations and abuses we have documented underscore the need to hold perpetrators accountable on all sides,” said Michelle Bachelet, UN High Commissioner for Human Rights.

On Nov. 4, 2020, the armies of Eritrea and Ethiopia, supported by Somali conscripts and ethnic militia from several of Ethiopia’s regions, invaded Tigray. The war was, from the start, an international conflict. The Ethiopians had signed a tripartite security agreement with Eritrea and Somalia in September 2018, which underpinned their relationship. Eritrean and Somali troops were thrown into the fray. By far the most significant number were Eritrean, many of them young recruits caught up in the system of indefinite conscription that is known as “National Service.”

Despite this, the Tigrayans held out and by late 2021 advanced so far south that the international community began to fly their staff out of Addis Ababa. By the end of last year, the conflict came to an uneasy halt and was only re-ignited with increased ferocity in August this year, with renewed attacks on the region from all sides.

What next for Eritrea?

Assuming that the war is now over – and this cannot be taken for granted – what plans does Eritrea’s leader, President Isaias Afwerki have up his sleeve? As the national leader who led the country’s 30-year fight for independence from Ethiopia (which ended in 1993) the president has simply hung onto power. He has never stood for election and has no functioning constitution or National Assembly, he is answerable to no one.

Eritrea has the worst global score on the BTI Governance Index, scoring just 1.12 out of a possible 10 points, earning it a “failed” ranking. The president only trusts his closest associates in the ruling party – the People's Front for Democracy and Justice (PFDJ) – and the military, and even these are regularly changed so that they have next to no authority.

Despite ruling over a tiny, impoverished population of around 3.5 million (approximately, since there has been no recent census), the Eritrean leader regards himself as a directing force in the Horn of Africa. As such, he has intervened in all his neighbors, from Somalia to Sudan, as well as Ethiopia.

His relationship with Ethiopian Prime Minister Abiy Ahmed formally dates from 2018, when the two signed a peace deal in Saudi Arabia. Since then, their forces have fought side by side in Tigray. Yet the relationship is not without tension. The Eritrean President has resisted requests for Eritrean troops to leave Ethiopia, something which was called for in the recent Nairobi cessation of hostilities, which said that disarmament would take place “concurrently with the withdrawal of foreign…forces from the region.”

Instead, Eritrea has begun training militia from the Amhara ethnic group in a northern region of Ethiopia that borders Tigray – the Fano – who are generally hostile to the Ethiopian leader. President Isaias previously used foreign forces to threaten neighboring leaders with the use of force. In 2011, for example, the United Nations reported that Eritrea was behind a planned “massive” attack on an African Union summit in Addis Ababa, using Ethiopian rebels. It would be wrong to assume that a similar attack is now on the cards, but the Fano could be used to pressure Prime Minister Abiy.

Other scenarios include re-igniting conflicts with neighboring Djibouti or intervening in Sudan. This leaves the Horn of Africa in a precarious position, with an unfinished war in Tigray and conflicts in several other Ethiopian regions, while Somalia continues to fight Islamic militants and Sudan is in a precarious position following the recent peace deal between the military and the civilians. Predicting what President Isaias might do next is impossible, but on past performance one can be certain that he will wish to extend his influence beyond his borders, preying on the conflicts that continue to plague the region.

Martin Plaut is a freelance journalist and a senior research fellow at the Institute of Commonwealth Studies focusing on the Horn of Africa and Southern Africa. He is the former Africa editor of BBC World Service News.