Pacific voices react to China's rising influence in the region 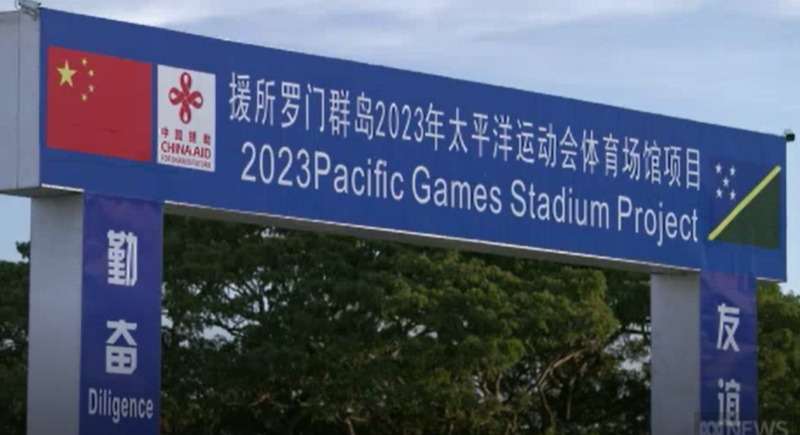 The Pacific games stadium one of the projects China is helping to build in the Solomon Islands. Screenshot from video of Four Corners, ABC

China has rolled out its Belt and Road Initiative (BRI) in the Pacific region after securing the support of at least ten nations.

The BRI expansion in the Pacific has inflamed geopolitical rivalries and generated mixed reactions in Pacific communities.

Over the past year, Global Voices published several reports that reflect frames and narratives related to the impact of BRI projects in the Pacific.

A key narrative promoted by Chinese officials and their supporters is to highlight that China is a friend of the Pacific. In statements, speeches, and press releases issued by Chinese diplomats, they enumerated the ongoing and future projects that China is funding across the region. BRI projects range from municipal markets and roads to stadiums and sports facilities. There has also been an increasing reference to green development as Chinese officials point out that BRI is a “win-win cooperation” for both China and the Pacific in sustainable development.

However, it is unclear whether the financing for the BRI projects is through loans or aid grants. The statements of officials also do not mention how BRI projects in the Pacific can boost China’s economy and influence as a rising superpower.

An independent study described the strategic role of the Pacific BRI as a “critical air freight hub” connecting China with Central and South America.

Another central narrative promoted by Chinese officials is the claim that China is different from Western superpowers. They often argue that China has no ulterior motives in expanding its economic and diplomatic presence in the region. They insist that China is a benevolent superpower, unlike other big nations in the Pacific like the United States and Australia. An example of this narrative is articulated by Chinese diplomat Li Ming:

China has no selfish interests, and does not seek ‘spheres of influence’ or use bully and coercion. China will always be a constructive force for peace and development.

When China’s Foreign Minister Wang Yi toured the Pacific in May, the Chinese government underscored that it will treat Pacific countries as equal partners in its BRI endeavors:

Wang Yi stressed that Pacific Island Countries are sovereign and independent states and are not anyone's “backyard”; both countries have the right to make their own choices, not being subordinate to others.

The leaked security pact between China and the Solomon Islands alarmed the United States and Australia as they warned against a possible military buildup in the region. China has denied that it plans to establish a military base in the Solomon Islands as it dismissed the concern as part of “Western threats and hysterical attacks” aimed at amplifying “anti-China noises.”

Wang’s tour highlighted the simmering anxiety over the increasing presence of China in the Pacific. For example, local residents and stakeholders were able to express their fear that China’s model of media censorship will be adopted in the Pacific.

Local journalists raised this issue when they were prevented from directly asking Wang during his 2022 visit to the Solomon Islands, Kiribati, Samoa, and Fiji. Journalists in the Solomon Islands have even called for a boycott. But Timor-Leste journalists pushed back and pressured their government to respect the media’s right to engage with officials, including Wang.

It was not just the refusal to meet the press that triggered the concern about China’s role in undermining media freedom but also the lack of transparency and information about the BRI projects. Locals are wary about the details of the projects, including the extent of subsidies and conditions offered by the Chinese government.

The secrecy surrounding some of these agreements, especially on matters concerning security, has elicited fear among some local citizens that China’s BRI might drive other superpowers to enhance their security cooperation with Pacific governments. In other words, China’s Pacific expansion could militarize the region.

This is evident in the Solomon Islands, where China actively trained the local police force and donated replica guns. This led Australia to offer guns and security vehicles to the Solomon Islands government. Not to be outdone, China provided water cannon vehicles while arranging a martial arts demonstration during the turnover ceremonies. Local analysts and the opposition criticized the donations and warned against turning the country into a “gun state.”

Meanwhile, the United States has renewed its partnership with Pacific countries which observers have noted is intended to deflect China’s rising influence in the region.

Despite China’s assurance that it will not interfere with the affairs of Pacific nations, it has been accused of disrupting regional unity. Kiribati’s decision to leave the Pacific Islands Forum (PIF) in July 2022 is supposedly related to a dispute over leadership. But an opposition leader believes that China has a role in this decision: “China wants to isolate us.”

Aside from the Solomon Islands, Kiribati is among the Pacific countries which broke ties with Taiwan and recognized the Beijing government. Kiribati is also a recipient of Chinese investments and BRI projects. China has rejected the accusation that it caused Kiribati’s departure from the PIF, but it reflects how the BRI and other new initiatives could easily trigger suspicions about the real motives of the Chinese government.

China’s Pacific push is expected to continue into 2023, with the BRI as its major economic and diplomatic tool. This will certainly continue to draw a strong response from other superpowers in the region. But based on what Global Voices covered over the past year, the real challenge for China will be addressing local resistance and convincing Pacific communities that its presence will improve the region’s present and future development.