Can a literary festival bring Nepali literature to the international stage?

There is room for the Nepali government to promote literature 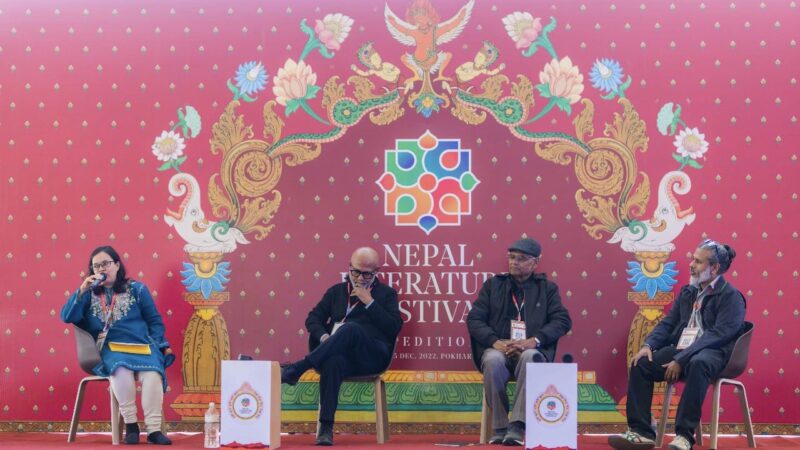 The 10th edition of Nepal Literature Festival, Nepal’s only international literary festival, was held in Pokhara from December 21 to 26 amid enthusiasm and excitement among literature lovers as well as people of different walks of life. With 55 diverse sessions over 5 days, the event was a combination of literature, culture, poetry, and music as well as discussions on different topics that include sports to food, nature to politics, literary translation to creative writing and many more.

Writer Mohan Mainali, one of the participants, shared his enthusiasm for attending the event and talked about his session on Twitter:

A few days from today in Pokhara! I will listen to others. I will talk about ‘from Mahabhara to Kanchenjunga’ while staying in Pokhara near the Dhavalagiri, Manaslu and in front of Annapurna and Machhapuchhre mountains.

Writer Deepak Parajuli, another participant, gave a virtual tour of the event on Twitter:

Participants were also seen sharing how interesting they found the session on creative writing. A member of the Nepali House of Representatives, Manish Jha, tweeted:

A conversation with the author of “The Maximum City” @suketumehta. “The art of writing” was an interesting session at @Nepallitfest.

Global Voices (GV): With the festival covering many interesting sessions on diverse topics, are you seeing a different result from previous years? 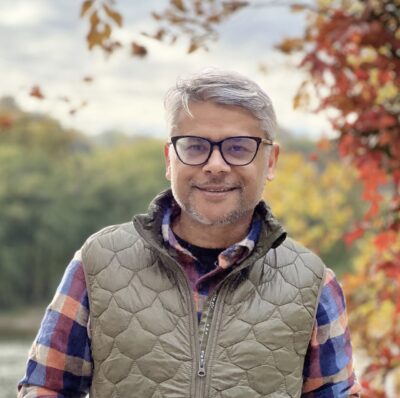 Ajit Baral (AB): Every year we try to be as diverse in the topics we discuss and be inclusive of the participants we invite. This festival is no exception. In fact, this edition was most varied in terms of sessions, which ranged from music to sports, politics to social justice, education to animal habits, economy to climate change, libraries to Nepali cuisine, federalism to folktales, and journalism to narrative non-fiction. Whatever the topics, our aim has always been to regale the audience with scintillating conversations and enlighten them with expert knowledge. This edition is no different in this regard, either. That said, our focus was on the craft of writing this year. We had Indian American author Suketu Mehta talking about writing place, Indian biographer Akshaya Mukul holding forth on the art of biography, Nepali American author and professor of creative writing at Indiana University Samrat Upadhyay deliberating on creative writing, and the Booker Prize-winning Sri Lankan author Shehan Karunatilaka on the writing of “The Seven Moons of Maali Almeida.”

GV: How can literary festivals pave a path in bringing Nepali literature to the international market?

GV: How do you visualise Nepali literature evolving in the next ten years?

AB: In the past ten or fifteen years, we have seen a growth in the production and publication of Nepali literature in the Nepali language. I think this trend will continue, and Nepali literature will be richer and more robust in ten years from now on. But will we have works of great ambition that are sweeping, experimental and transformative and that will force the world to take notice? I am not sure.

I would like to see more Nepali literature coming out in English in the near future. But I cannot confidently say that it will. Writing for an English weekly in 2004, I had conjectured, somewhat cheekily, that in the next ten or fifteen years, better works of Nepali literature would be written in the English language than in Nepali. Perhaps I was more optimistic then by the international success of Samrat Upadhyay and Manjushree Thapa, but I had solid reasons to believe so. However, that hasn't turned out to be. Once bitten, I wouldn't make similar claims now! Not with all the young, educated class leaving the country at the first available opportunity. I think this is what is sapping the growth of Nepali literature.

GV: What role can the government of Nepal, and national and international literary communities, play in bringing Nepali literature to global attention?

AB: The government can do much. They can support literary festivals, provide grants for the translation of great works of Nepali literature, provide residencies for writers or fund their research for books. As for the national and international communities, they can read as much Nepali literature as they can or get hold of and champion the works that they think can compete with other works of international literature.