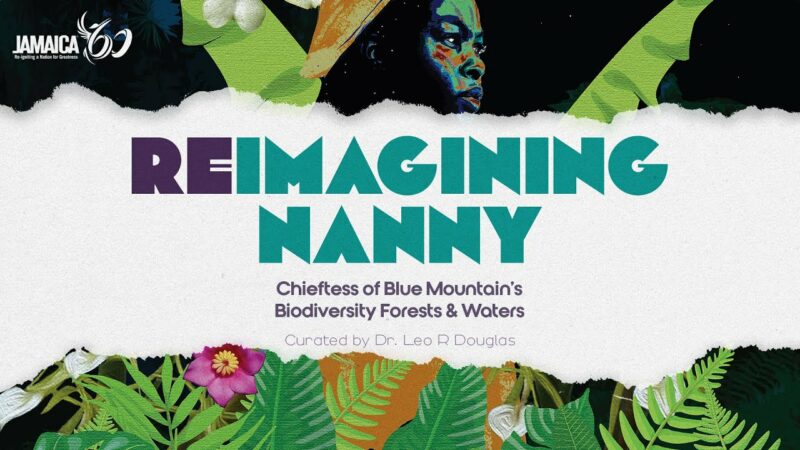 In the pantheon of Jamaica’s seven National Heroes, Nanny of the Maroons is the only woman. “Grandie Nanny,” as she is called, a middle-aged, unsmiling woman with cutlass in hand, is commonly portrayed as a fierce warrior, leading her tribe of self-liberated Africans during the First Maroon War, which began around 1655 in an effort to secure their continued freedom. A shroud of mystery still surrounds Nanny, however: the dates of her birth and death are unknown, and there is some debate over whether she was born in Jamaica or in West Africa.

So, who was the true Nanny?

A Jamaican-born professor at New York University, Dr. Leo Douglas, has been pondering Nanny’s significance, both culturally and historically. In particular, he has considered her relationship with Cockpit Country, the rugged, mountainous environment in which she lived. An ornithologist and conservation biologist with a focus on humans’ interactions with the environment, Dr. Douglas began to work on what he called the “Reimagining Nanny” project, partly inspired by Jamaica’s 60th year of Independence from Britain:

The death of my mother at the start of the summer of 2021 was the initial trigger to tell stories at the intersection of heritage and biodiversity. My mum told me many stories that she credited to her parents and those of her parent's generation. Jamaican women are important story tellers, and preservers of heritage for us all.

By October of that year, after discussions with the Jamaica Conservation and Development Trust (which administers the Blue and John Crow Mountains National Park), and with the Institute of Jamaica (whose executive director is himself a Windward Maroon), Dr. Douglas issued an open call for visual artists around the world to participate.

The resulting artistic interpretations of Nanny, currently on show at the Institute of Jamaica, are the five winning artworks, including the winning entry by Jamaican artist Richard Nattoo. They express a “counter narrative,” as Douglas describes it, to the colonial view of the environment since plants and trees already had local names before colonisers renamed them, and offer a glimpse into a different Nanny.

Douglas was looking for work that was unique; work that honoured Black women and told a story that included elements of Nanny's lived experience in her environment, a forested area very similar to West Africa, with its connected traditions. Dr. Douglas illustrated this heritage with a series of detailed, illuminating tweets:

Cacoon (Entada rheedii) seeds & seed-pods. This vine connects the Caribbean to West Africa… I had the pleasure of collecting these samples with Chief Wallace Sterling in Moore Town Maroon Community #Portland #Jamaica on Saturday. Food, Medicine, Camouflage, and more… pic.twitter.com/Lnlodky7EZ

Dr. Douglas also travelled to eastern Jamaica, home of the Windward Maroons, and talked to them about how they regarded their ancestral National Hero. He renewed his friendship with the Chief of the Moore Town Maroons, Colonel Wallace Sterling, who asserted that Nanny “spent very little time fighting.” He also learned many things about Nanny from his own sister, and from his cousin Colonel Marcia Douglas, leader of the Charles Town Maroons (one of Jamaica's four Windward Maroon settlements), tweeting:

The project is a reflection of my work that I describe as people-environment geography. I am always thinking about what nature, plants and animals mean to people as these feelings, values and beliefs, then influence behaviors about and towards the natural world. […]

Richard, our first place winner, rose above the crowd with his youthful portrayal of Queen Nanny who must have been a girl (likely either an adolescent or teenager) when she arrived in Jamaica. He also used symbolism really well, in that he described how the Mountain Witch (Crested Quail-Dove) was his inspiration [for depicting] Nanny in the colours of the Quail Dove, a threatened Jamaican endemic bird. The judges loved the sense of watchfulness, peace and wisdom that Richard brought to his work, especially at this time when Maroon identity is so contested in the Jamaican media and beyond.

At the launch of the exhibition on November 27, chair of the Natural History Museum of Jamaica Professor Ronald Young reflected on the traditional image of Nanny as “a notably one-dimensional persona” and an “ephemeral heroine” in the minds of most Jamaicans:

Snatched from the pages of Maroon history, without the trappings and particularities that give depth and reality to any individual, Nanny is an icon, designed to embody the strength, resilience, strategic intelligence, organisational ability that we perceive every day in our women … but this icon falls short.

“Reimagining Nanny” is an important step in bringing this historic figure to life, not only as a strong leader but also as a more profoundly thoughtful and spiritual person, in touch with her ancestral knowledge and the natural environment around her. In Professor Young's words:

In a world which cries out for empathy with environmental issues in the face of the threats of climate change and the increasing separation of humanity from its spiritual roots, how important this change was to add depth and relevance to our understanding of who Nanny was.

Dr. Douglas is currently producing a documentary film about Nanny, to be released in time for International Women's Day as well as the United States Women's History Month, the theme of which is “Celebrating Women Who Tell Our Stories”:

Missed last weekend's #ReimaginingNanny #Jamaica60 @IoJ_jamaica launch? Coming next – the documentary for International Women's Heritage Month 2023. Some of the most compelling interviews about Queen Nanny and the eco-cultural African retentions of her generation. Brief clip: – pic.twitter.com/9O8IYwK3Qv

The full list of winners of the “Reimagining Nanny” project includes: “Moonlight Meditations of Mama Nanny” by Richard Nattoo; “Queen Nannies” by Leigh Goffe; “We Are Still Here and We Remember” by Ibaya Art; “Warrior Shield VI: Queen of the Blue Mountains” by Lisa Callender; and “Queen Mother Arms of Liberation” by Nigerian artist Segun Bamidele Aiyesan.