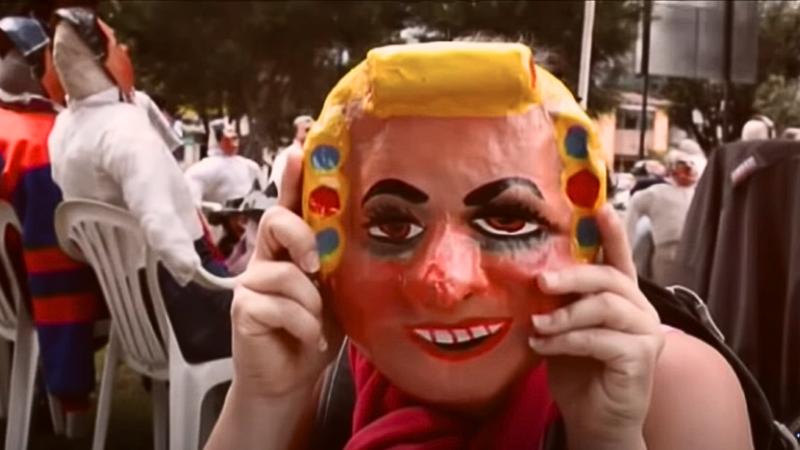 Latin America is rich in traditions for year-end parties. We share some cheerful, curious, superstitious, and adventurous customs from various regions of the continent to say goodbye to the old year and open a new chapter in our lives. People engage in these rituals to ensure travel, love, or money in the coming year, or simply to close the cycle of the year that has passed in a humorous or spectacular way.

In Latin America, a very old and deeply rooted ritual to bid farewell to the old year is to wear underwear of a certain color, each color having a meaning and different stories about its origin. Some versions specify that these garments must be gifted, not bought, or that they must be worn backward.

The most widespread color of underwear in almost the entire region is yellow, generally its meaning referencing the sun, new beginnings, and economic prosperity. It is used especially in Colombia, Ecuador, Venezuela, Chile, Mexico, and Peru, and sometimes also in Argentina and Uruguay, although in these countries the pink bombacha (panties or bikini) are much more common.

There are different theories about its origin, some related to religion, others to Victorian fashion, and others to the desire to find love in the coming year. Red, also with reference to love and passion, is another color used in some families in Peru and Argentina, although it predominates in Spain, where it has a medieval origin. The following television reportage shows how the markets are filled with these special garments at the end of December:

Leaving with suitcases at midnight

Those who want to travel choose this ritual, which is believed to bring many trips and adventures in the coming year: Pack a suitcase and go for a walk around the block immediately after the midnight toast. This custom is practiced throughout the region, although the countries where it is most common are Venezuela, Colombia, Mexico, and Peru.

The ritual varies a lot. In some cases, it is enough to place the suitcases in front of the door or walk with them on the patio or in every corner of the house. According to other versions, the suitcase must be filled with clothing and specific accessories for the place where you want to travel (for example, bathing suits, towels, and sunscreen if you want to go to a place with beaches or climates suitable for bathing).

The following video shows a family that chose this tradition, where they run with a suitcase while the famous song “Año nuevo, vida nueva” (“New year, new life”) by the Billos Caracas Boys band can be heard playing in the background:

In countries like Ecuador, Argentina, Venezuela, Chile, Mexico, Colombia, and Peru, it is also customary to eat 12 grapes and make a wish with each one, since each grape represents a month of the coming year.

This custom comes from Spain and has spread to Portugal and Latin America. According to National Geographic, one of the hypotheses for the origin of this tradition is that it dates back to 1909, when there was a good harvest of grapes, and the producers sold the surplus, marking the fruit as “lucky grapes.”

According to this tradition, one grape should be eaten every second in the last 12 seconds of the year. However, it is very difficult to manage to eat 12 grapes in 12 seconds, especially while hugging those close to us and wishing them a good year. Some say that the key is to choose small, seedless grapes. Maybe by following this advice we will finally succeed in eating them this year!

Burning an old doll or “puppet”

In many countries, such as Honduras, Panama, Venezuela, Uruguay, Chile, Ecuador, and Colombia, and some cities in Argentina, a monigote (doll) is made that represents the old year.

There are dolls of all sizes. They are generally the size of a person, but there are smaller ones and much larger ones as well. They are made with different materials, such as cardboard, sawdust, rags, and newspapers. They can be painted, dressed, and don a mask of a well-known character from television, entertainment, or politics who had a significant role in that year, and who, many times, symbolizes a negative aspect of that year. For example, in 2020 and 2021 it was popular to burn dolls that personified COVID-19. Just after midnight, the doll is burned to bid farewell to the old year and welcome the new one.

“For Panamanians, the meaning of this custom is purification. The dolls of the old year are a symbolic representation of the negative things that happened during the year, they are in the doll and burn along with it,” explains a Panamanian media outlet. One of the theories of the origin of this tradition mentions that it goes back to the threat of yellow fever in Guayaquil, Ecuador, in 1895.

Some dare to jump over the fire, which is often very high, to symbolize the passage from one year to the next. The following video, from Ecuador, shows a big fire from burning several dolls:

Dressing up as a widow

In Ecuador, there is also a tradition for men to dress up as “widows.” Generally, they dress in funny or dark clothes, and go out into the street pretending to cry for the year that “has died.” In addition, they ask for coins to pay for the “wake” of the old year and the life of the “widow,” who supposedly is left without a livelihood. Some people also write a will with funny verses and poems to bid farewell to the year and recite them to passing people and vehicles.

What is needed in order to “be a good widow” in the new year are “clothes that should flatter your figure; the wig, your eyes and, yes, you can't miss the false breasts, while attitude is the most important thing,” advises Daniel Pavón, 22, in the Ecuadorian press.

Bringing out the firecrackers

In many Latin American and Caribbean countries, there are no New Year's Eve parties without firecrackers. For example, in El Salvador, exploding small firecrackers among family and friends has become an unavoidable tradition. The markets are filled with various types of firecrackers for everyone, each with its name, such as gallitos (roosters), estrellitas (little stars) and volcancitos (little volcanoes) for children, and metralletas (machine guns) for adults to have fun.

There were attempts to regulate the marketing of some pyrotechnics, but they continue to be sold and used on a large scale to celebrate the Christmas season. When they burst into the neighborhoods at midnight, they give an additional rhythm to the cumbia music that sounds in the houses and the smell of delicious New Year's Eve meals. The following video shows a typical firecracker scene:

While you participate in these traditions, you can listen to our following selection of the most popular Christmas and New Year's songs in Latin America: