[Stalin was] 'a very different kind of calypsonian' 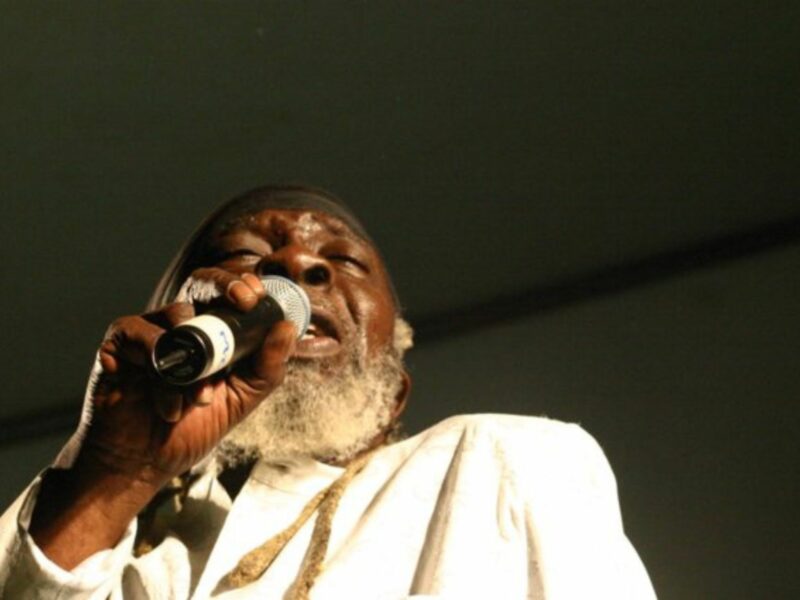 There's a saying that when elders die, it's as if a library has been burned to the ground. That loss is compounded when the elder in question is a griot, a master storyteller who is a repository of a culture and a virtuoso of the oral tradition. On December 28, Trinidad and Tobago experienced such a loss when veteran calypsonian Leroy Calliste, better known by his sobriquet “Black Stalin,” died at the age of 81.

Best known for penning and performing songs examining issues of colonialism and oppression, his endearing personality and stage presence, combined with bitingly witty lyrics and danceable melodies, made him a favourite both within the calypso fraternity and with the large audiences that would turn out to see him.

Born in south Trinidad on September 24, 1941, Calliste participated in limbo dancing and steelpan playing in his youth, getting his start in the calypso arena at the age of 17. He joined his first calypso tent, the Southern Brigade, three years later, and never looked back. By the 1960s, once an elder calypsonian — in Stalin's case, Lord Blakie — gave him his moniker (as was the custom), Stalin's star was on the rise. He joined the legendary calypsonian Lord Kitchener's Calypso Revue tent in 1967 and reached the finals of that year's Calypso Monarch competition.

He also won the Calypso King of the World title in 1999, a global event at which, in its inaugural competition in 1985, Stalin placed second to The Mighty Sparrow, the undisputed Calypso King of the World. In the mid 1990s, Stalin signed with Barbadian Eddy Grant's Ice Records label, releasing his “Rebellion” album in 1994 and “Message to Sundar” the following year.

On October 31, 2008, Stalin became Dr. Leroy Calliste when the St. Augustine, Trinidad campus of the University of the West Indies presented him with an honorary doctorate for his contributions to calypso music, a fitting follow-up to the national award, the Hummingbird Medal (Silver), conferred upon him by the government in 1987 in recognition of his cultural contributions.

Two days before his 73rd birthday, in September 2014, Black Stalin suffered a stroke after performing at a charity show in south Trinidad. Despite making some progress, he would never again return to the stage in full force.

Throughout his long and vibrant career, Stalin always managed to put a highly original, intelligent spin on the issues of the day. He was a fiercely independent thinker and lyricist who called it like he saw it. “Wait Dorothy Wait,” for instance, was a brilliant tune that promised his fans he would one day write them a light-hearted, smutty calypso — but only after serious social issues like corruption, inequity and poverty were addressed. The song, which was both danceable and deep, showcased his creative range and defended his right to sing about topics of social relevance.

His 1979 hit “Caribbean Man” (also known as “Caribbean Unity”), created some controversy across the region, as it addressed the ever-elusive concept of Caribbean integration. The National Archives of Trinidad and Tobago put it in context:

The late Trinidadian journalist Terry Joseph noted back in 2001 that Stalin was always “a very different kind of calypsonian,” with his many victories always coming “in spectacular fashion” against a field of veritable calypso heavyweights. He mastered everything from party songs to social commentary, love songs to political picong:

Stalin abrogated unto himself the burden of representing the views of the oppressed. His social and political commentaries never settle for banal reportage, but provide insights as to how repair can be effected, or at least suggest ways to help arrest slippage.

His disarming smile and gentle manner mask a razor-sharp wit, one that has conspired with a bag of memorable and highly interactive songs, to help him win fans the world over.

Indeed, Stalin travelled widely, performing in Europe, North America and throughout the Caribbean — and despite his busy schedule, was a dedicated family man to his wife Patsy and their three children. Upon hearing the news of his death, netizens began sharing their condolences on various social media channels, expressing gratitude for “the music and the memories.”

Facebook user and former journalist Neil Giuseppi noted that “a legend has left us,” while deejay Jus Jase bade farewell to “a true icon in Calypso.”

This man was a king he sing and performed and always did his best.

Walk in glory. Fly high. […] Another icon has left us with his amazing music and memories. #BlackStalin

“Black Stalin has performed in front of global audiences and left an indelible mark in the hearts and minds of millions who witnessed his energetic performances.”

Rest in peace to #BlackStalin, a Trinidadian calypso legend that sang this classic tune beloved by all West Indians https://t.co/eqfdsVnbIo

Rest in Peace Icon. Dr Leroy Calliste The Black Stalin. Condolences to his family and loved ones. May your art continue one to exist for generations to come and your desire to uplift. pic.twitter.com/SW8ZJ3M5kd

Stalin's music was timeless and effortlessly appealing to younger generations, as was the case this past November 21, when his classic tune “We Can Make It” was sung during the opening ceremony of the 11th Commonwealth Youth Parliament at the Red House in Port of Spain, the seat of Trinidad and Tobago's parliament.

For the singer's 80th birthday in 2021, Stalin became the first recipient of the Legacy Award from the south-based Presentation College, one of Trinidad's most prestigious secondary schools. At the ceremony, fellow calypso practitioners spoke of how much they valued both his mentorship and friendship, while Minister of Culture Randall Mitchell acknowledged Stalin's contribution to the cultural landscape of the country.

Stalin was valued as much for the quality of person he was as for the music he sang, a rare combination that makes him truly deserving of the title “icon.”