Police in Azerbaijan detain protesters on the day of activist's trial

Scores of activists were reportedly detained 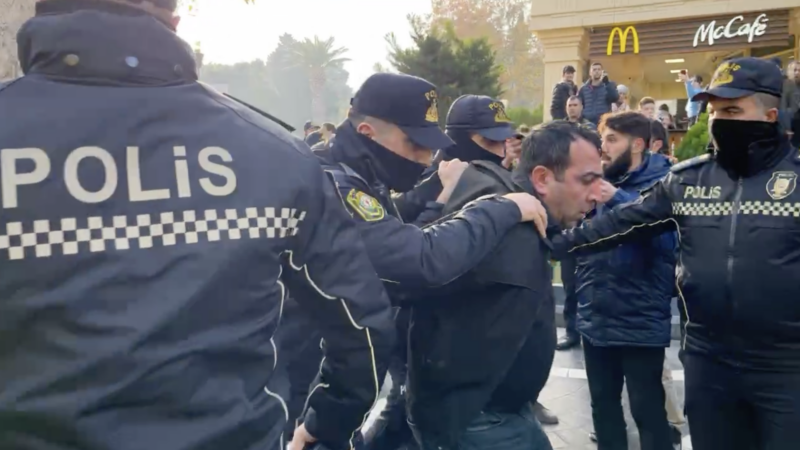 Police on the scene arresting activists attending the rally. Screenshot taken from a video by Meydan TV.

On December 23, an appeals court in Baku, Azerbaijan ruled to keep political activist Bakhtiyar Hajiyev behind bars. Hajiyev was arrested on December 9 on what local and international human rights organizations consider bogus charges and sentenced to 50 days in detention.

Hajiyev requested release under house arrest at the most recent hearing. The political activist has been on a hunger strike since his arrest. His health condition has now been described by his lawyer as deteriorating. The same day, a group of supporters attempted to stage a protest in support of Hajiyev. Police detained a few dozen activists prior to and during the protest.

📢At least 35 people from various oppositional groups are reportedly detained before the protest where dozen more are detained during the protest. Protesters called for freedom for Hajiyev where police immediately dispersed participants & also briefly detained a journalist. +

Several detentions today in Baku prior to a planned protest rally with a demand for the release of political prisoner Bakhtiyar Hajiyev. In the meantime, the appeal court left him behind bars after another sham trial. Hajiyev is on the 9th day of hunger strike. https://t.co/WKO5herh2n

This is how the police detain two “Democratica 1918″ members. All they did was attend the court hearing of detainee Bakhtiyar Hajiyev.
Yes the action in the Lachin corridor is “completely free” yes.. https://t.co/EIZIUaEqCo

On December 20, the State Department Spokesperson, Ned Price, reiterated in a press briefing the concern over Hajiyev's arrest, calling for the activist's expeditious release.

Similarly, in an interview with Azadliq Radio on December 22, Azerbaijan Service for Radio Liberty, Giorgi Gogia, the Associate Director for Europe and Central Asia at Human Rights Watch, said the decision to arrest Hajiyev must be lifted and the activist must be immediately released.

“Pre-trial detention of a well-known activist Bakhtiyar Hahiyev raises major concerns. Azerbaijani human rights defenders consider criminal case against Mr. Hajiyev to be based on misuse of criminal law and to serve as an illegal reprisal for Hajiyev's latest international advocacy work and for exercising his right to freedom of expression,” tweeted Kety Abashedize, Senior Human Rights Officer at the Human Rights House Foundation.

Hajiyev's arrest is not an isolated case. Scores of activists and journalists continue to face a wave of persecution in Azerbaijan. Azerbaijan's track record on press freedom has been steadily worsening for many years now. This is reflected in the country's place on press freedom rankings and journalists’ personal accounts of persecution and intimidation. This year, on World Press Freedom Day, Reporters Without Borders ranked Azerbaijan 154th out of 180 countries. Although the country's score improved from last year, moving up by 6 points, the draconian media law that came into effect at the start of this year will have further graver consequences on media freedom and plurality. Azerbaijan was also ranked “not free” by annual Freedom in the World index by Freedom House. Meanwhile, authorities refute claims that the present crackdown — including Hajiyev's — is political.

Hajiyev is facing multiple charges — hooliganism and contempt of court. If found guilty, Hajiyev may be sentenced to three years behind bars.

Meanwhile, the head of the committee set up to defend Hajiyev, Rufat Safarov, said on December 19 that the political activist faced ill-treatment in prison because of his hunger strike. On the fifth day since Hajiyev announced his decision to go on a hunger strike, prison management has transferred him to a cell with no heating.