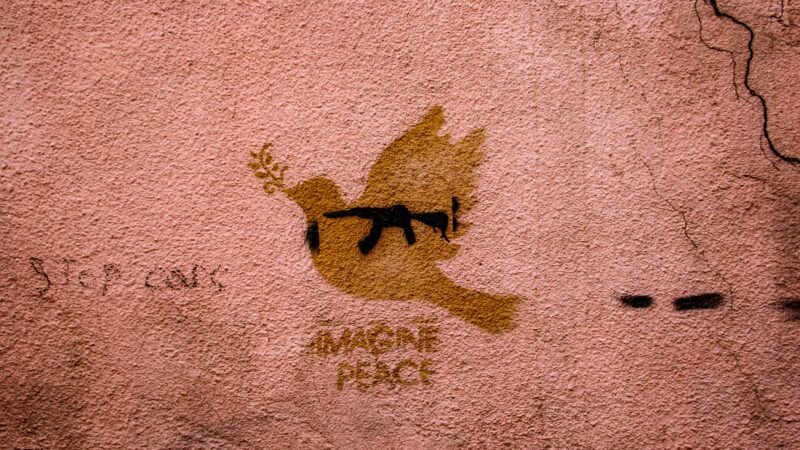 Image by Zaur Ibrahimov. Free to use under Unsplash license.

Armenia and Azerbaijan may have fought a war two years ago and signed an agreement to end hostilities, but tensions between the two countries over the Karabakh region linger. The most recent episode involves environmentalists from Azerbaijan — allegedly linked to the government — blocking the Lachin Corridor — the only route connecting Armenia to Karabakh across the territory of Azerbaijan. While at first, the demands of protesters were to stop the illegal mining in Karabakh and prevent the transfer of minerals into Armenia, in the following days, the demands changed. According to reporting by Radio Liberty, the protesters now demand “that Baku establish control over the Lachin Corridor.”

The sole land route has been blocked since December 12, 2022. So far, it has disrupted access to essential goods and services for the population living in Karabakh. It also prevents Karabakh residents from crossing the region. According to media reports, thousands have been stranded on either side of the corridor, unable to reach their homes since the blockade began, including children. Reports are circulating of a looming humanitarian crisis as a result of the blocking.

Lachin Corridor is supposedly under the protection of Russian peacekeepers who have been deployed on the territory since November 2020 following the Russia-brokered agreement signed between Russia, Armenia, and Azerbaijan. They are also in charge of providing security for entry and exit points of the corridor. In a broader context, however, the role of some 2,000 Russian peacekeepers remained vague after their deployment. The lack of clearly defined roles, responsibilities, and activities in the 2020 agreement is now becoming an issue. The blockade is a testament to that. The ongoing paralysis of the main route connecting Karabakh to Armenia shows that emboldened by the Kremlin's weakness, official Baku won't shy away from criticizing the role of the Russian peacekeepers. They have already been called the “occupiers,” and criticized for harboring pro-Armenian sentiments. The role of the peacekeepers has also been scolded by Armenia, most recently during the cabinet meeting on December 22, when Armenian Prime Minister Nikol Pashinian said Moscow was not fulfilling its obligations as part of the November 2020 agreement.

This is not the first time Lachin Corridor was blocked. Previously the route was cut off on December 3 but only for a few hours. Fast approaching a second week, the blocking of the route has meant a total lockdown for the residents of Karabakh. According to international stakeholders and reporting from the ground, it is a humanitarian crisis unfolding in front of our eyes.

ICRC mediated the transfer of a person in critical condition from Nagorno-Karabakh to Yerevan.
He needs urgent surgery.

Prolonged blocking of the only road connecting Nagorno-Karabakh to the outside world could lead to dire humanitarian consequences. Regardless of who is blocking the road, Azerbaijan’s authorities and the Russian peacekeeping force deployed there should ensure that access remains open, to enable freedom of movement and ensure people have access to essential goods and services. The longer the disruption to essential goods and services, the greater the risk to civilians.

A spokesperson for France's Ministry for Europe and Foreign Affairs said in a statement that France called on Azerbaijan to restore access and supplies to Nagorno-Karabakh, “with due regard for the rights of the population living there.” The statement also called on Azerbaijan to stay true to its pledge “in accordance with the trilateral statement of 9 November 2020,” in which, “the Republic of Azerbaijan pledged to guarantee the safety of people, vehicles and goods traveling along the Lachin corridor, in both directions.”

The EU has also called on Azerbaijan, “to ensure freedom and security of movement along the corridor, in line with the trilateral statement of November 9, 2020. Restrictions to such freedom of movement cause significant distress to the local population and create humanitarian concerns.”
Meanwhile, official Baku has dismissed the claims that the blockade was the government doing. Instead, it blames Russian peacekeepers for blocking the corridor. In a statement issued by Azerbaijan Foreign Ministry it said:

As for the claims stating that the Lachin road was closed, and the Armenian residents living in the area are allegedly facing the threat of a humanitarian crisis, it should be noted that the Lachin road was closed not by Azerbaijani protesters, but by the peacekeeping contingent of the Russian Federation temporarily deployed in the territory of the Republic of Azerbaijan. Azerbaijan is ready to facilitate humanitarian needs of all Armenian residents living on its territories, and the claims of Armenian side are baseless.

Similarly during the UN Security Council emergency meeting on the Lachin Corridor on December 20, Azerbaijan Ambassador dismissed any claims that Azerbaijan was behind the blockade. Others at the meeting disagreed. “Let me be clear: impediments to the use of the Lachin Corridor sets back the peace process. They undermine international confidence in this process. And they carry potential severe humanitarian implications,” said Ambassador Robert Wood, Alternative Representative for Special Political Affairs at the UN Security Council.

UK Ambassador James Kariuki said, while they were pleased that the gas supply was restored, “The closure of the corridor for over a week raises the potential for severe humanitarian consequences – especially in the winter. We also note with concern the civilians who have been stranded by the closure and urge that their unimpeded return is urgently prioritised.”

Karabakh was cut off gas supply on December 13. Although Karabakh gets its gas from Armenia, the pipeline providing the supply passes through territories that were returned to Azerbaijani control in August 2022. All three are situated along the Lachin corridor route. The supply was restored on December 16 but authorities in Baku quickly dismissed any involvement in the disruptions.
However, Azerbaijan is known for showcasing its strength to achieve its goals. Ever since the ruling government secured victory in the second Karabakh war the ruling government has repeatedly leveled threats against Armenia, less the latter agreed to Azerbaijan's terms. Speaking to Civilnet, Tom de Waal agrees:

As we have seen the past two years, it is part of Azerbaijan tactics. Using force to achieve its goals. While I don’t think Aliyev wants war, he is ready to escape in order to force Armenians and Russian peacekeepers for concessions.

Others have likened the current situation around Lachin Corridor to a “borderisation theater,” which is a process of borderisation, making a de-facto or contested borderline an international border and using the site of these contested borders as a kind of theatrical stage for a geopolitical performance that advances a certain understanding and geopolitical agenda, explained Chatham House fellow Laurence Broers in an interview with Civilnet.

In the meantime a group calling themselves Post Soviet Peace Initiative, issued a statement in several languages and circulating online, calling on all parties involved to return to a negotiation table:

We, the Post-Soviet Peace Initiative, reject any forms of pressure, such as violence, isolation, blockade and call to open the Lachin Corridor. We also call the governments to solve all the problems and issues at the negotiating table. Humanitarian catastrophe in Nagorno-Karabakh is imminent. Act now. #OpenTheRoadToPeace #WeAreThePigeon

As the blockade continues, a video of one of those “environmentalists” suffocating a dove as she delivered a fiery speech during the blockade is perhaps the best illustration of the intentions behind this blockade. Or as one Armenia resident told OC Media in an interview, “They say we should live peacefully together, but they want to suffocate us like that pigeon she strangled to death. It was a hint, many just didn't get it. They just want to do the same with us.”