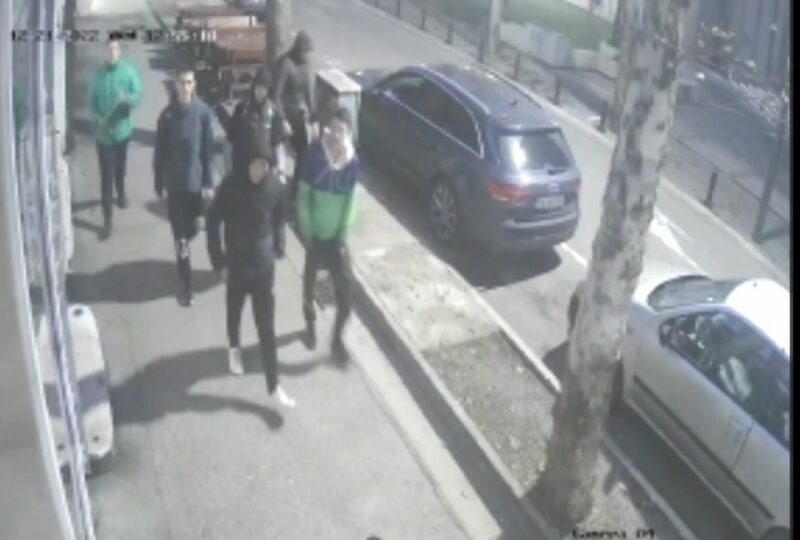 Screenshot from the security camera video showing a group of young men who attacked the LGBTQ+ Drop In Center in Podgorica, Montenegro on December 21, 2022. Made available for media distribution by NGO Juventas.

After an organized group of young thugs attacked on the LGBTQ+ Drop In Center in Podgorica, the capital of Montenegro, on December 21, the civil society organization Juventas  raised the alarm  by publishing a video clip of the incident.  Juventas issued an announcement reading:

Six persons armed with metal bars threatened the staff and clients of the LGBTIQ center, and attempted to break the glass on the main door. Several other incidents taking place in the area near the center preceded this attack, as groups of young men threatened staff members who were departing for their homes after the end of working hours.

Tonight the Juventas LGBTIQ Center in Podgorica was attacked again. Six persons carrying metal bars threatened the staff and present clients, and attempted to break the glass on the front door.

Since 2012 this center has been used as space for providing support services to the LGBTQ+ community by several local NGOs: Juventas, Queer Montenegro, Spektra, Stana, and Montenegro Pride. They demanded that the authorities urgently identify the attackers and process the case in line with the law.

This was not the first such attack on the center. In their announcement, Juventas stressed:

Keeping in mind that such events have been happening continuously during 2022, without an adequate response from the institutions of the system, we announce that we will continue our uncompromising fight against violence and hate, no matter which is their source.
We call upon the  whole public, decision makers and the international community to put all efforts into stopping the worrisome increase of hatred and intolerance which have become an everyday occurrence in Montenegro, destroying its society.

Leading Montenegrin civil society organizations, such as the Center for Democratic Transition (CDT), issued public statements in support of the threatened fellow citizens with demands for state institutions to do their job.

We call upon the competent authorities to urgently and efficiently process the attackers on the LGBTIQ Drop In Center in Podgorica. The state must guarantee life without fear of threats and violence to all. This is not a free country until all of us living there are free. We express support for our [male and female] LGBTIQ activist friends! 🏳️‍🌈

The annual European Commission (EC) report for 2022 on the progress of Montenegro towards joining the European Union noted that, while “the protection of the rights of lesbian, gay, bisexual, transgender, intersex and queer (LGBTIQ) persons continues to increase,” there's still much more to be done at systemic level to  ensure full compliance with the EU acquis and European standards on anti-discrimination.

The EC report noted several positive developments, such as the ninth Podgorica Pride in October 2021 without any incidents reported and with the participation of high-ranking government officials (the deputy prime minister and several ministers), and amending the law on compulsory health insurance, the law on social and child protection, and the law on personal income tax. A reference recognizing same-sex partnerships was added to harmonize them with the 2020 Law on Same-sex Partnerships. However the European Commission also notes that the implementation of this law saw “limited progress” with only 15 partnerships concluded so far.

Moreover the report noted that 2022 “was marked by high societal polarisation and division. The most vulnerable groups in society (including Roma and Egyptians, persons with disabilities, and LGBTIQ persons) were increasingly subjected to discrimination, hate speech and hate crimes.” Specifically:

Hate speech and homophobic incidents against LGTBIQ persons, including by members of Parliament, remain a matter of grave concern. In 2021, 55 reports were filed with the police against 57 people regarding discrimination against LGBTIQ persons. Demand for social services, psychological support and legal aid continued to increase due to the COVID-19 pandemic, as did the economic and social vulnerability of LGBTIQ persons.