If not for the United States, 11 million more Russians would have died 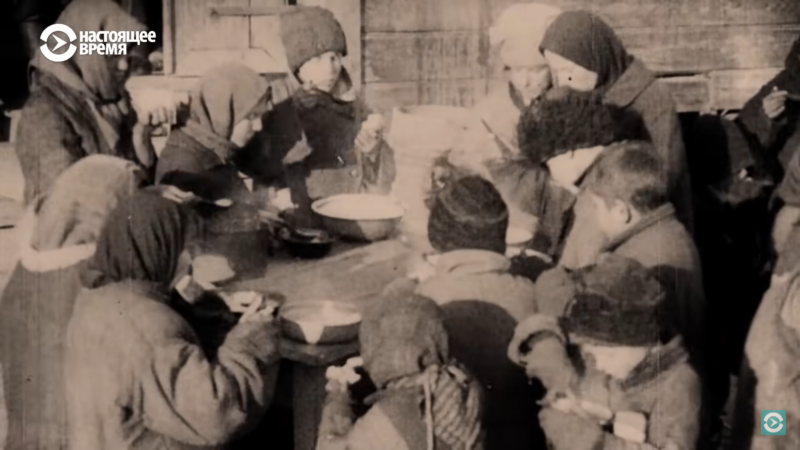 Screenshot from the documentary “Hunger” on Current Time YouTube.channel.

A documentary describing the 1921-23 famine in the Volga region and beyond has been banned in Russia for unknown reasons. As Deutsche Welle reported, “the reason for the revocation of the broadcast certificate was that the film contained ‘information, the dissemination of which is prohibited by the legislation of the Russian Federation’ ; however, that decision did not specify which information was deemed specifically to be prohibited.

The film, called “Hunger”, describes efforts of charity and government organizations from the US and Europe in saving around 11 million of people in Russia during that man-made famine.

In reaction to the government's ban, the three people behind the movie, director Alexander Arkhangelsky, journalist Maxim Kournikov and Tatiana Sorokina, have made their documentary available on YouTube.

In the history of Soviet Union, there were four famines. The famine of 1921–1923, which everyone calls the famine in the Volga region, was actually much wider — from Ukraine to Dagestan, from the Volga region to the Southern Urals, and the Kuban, the Cossack regions. But the core, of course, was the Volga region and the Urals.

The third famine is 1932–1933, which the whole world knows about thanks to the Ukrainian diaspora, Holodomor. [In a resolution adopted on November 15th 2022, the European Parliament recognized the famine inflicted by the Soviet regime on Ukraine in 1932-1933 as genocide]

“And the fourth famine, 1946–1947, the post-war year, which we generally forgot about,” adds Arkhangelsky in an interview with the online media Pravmir.  There is also the story of the siege of Leningrad, he points out and adds: “Our documentary is about the first famine in 1921–23, the Volga one, and about international efforts to help people.  Five and a half million had died in this famine but, also, over 11 million were saved by the foreign charity organizations.  It is the first famine in history that had been documented, too.”

The film is now banned in movie theatres in Russia.  On February 14, the Ministry of Culture “revoked” the resolution for film’s broadcast. Arkhangelsky wrote on Facebook:

What kind of legislation  forbids to talk about the fact that there was a famine in 1921–1923? That more than five million people died? That the world (by no means all, by the way) stepped over the ideology and showed solidarity with the suffering inhabitants of Russia? And thanks to this were more than ten million saved? This is a betrayal of one's own history, a betrayal of family memory.

The filming of the documentary became possible thanks to donations from ordinary people collected over the internet in 2021. At the moment, it is possible to conduct public viewings only in schools and museums in Russia.

The documentary starts with a poem by Bashkir native Yulia Yagudina, from Burungul village in Bashkortostan, an autonomous republic in the Urals region of Russia. Her poem is about hunger making people eat each other and kids’ bodies piling in the holes dug in the ground. 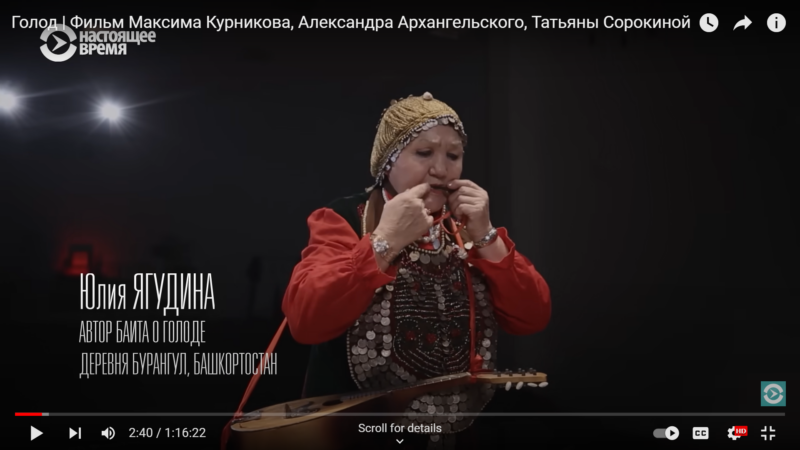 The documentary then goes on with interviews with historians from Russia (in Orenburg, Chelyabinsk, Kazan, Saint-Petersburg and other regions), the US and the EU,  who share facts about this famine: “We have data from orphanages… The death rate was up to 90 percent at that time there: practically, the kids were gathered there and they just died,” says Dmitry Safonov. “Geographically, there was this great hunger spread from Ukraine till the Urals, from Saint-Petersburg to the North Caspian Sea — over 1 million square miles of territory,” says American historian Douglas Smith.

The documentary also cites a secret report to Lenin:

Samara regional authorities reported to Lenin: there are people running from the territory. There is no bread left, state canteens are closing, and kids are without food in orphanages. There is an epidemic of cholera, stations and ports are overflowing with refugees… 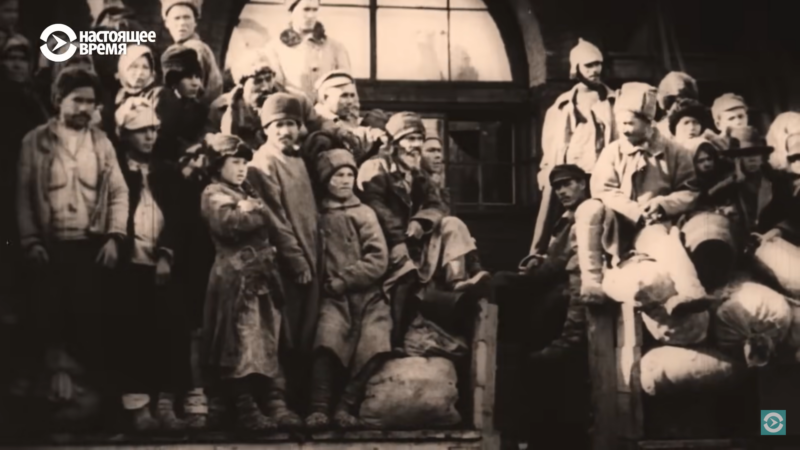 Screenshot of refugees in the Samara region, from the documentary “Hunger” on YouTube.

There were several causes of this famine: apart from the first world war (1914 – 1918) and the Russian civil war (1918 – 1920), Bolsheviks constantly confiscated food from peasants, which in turn made them resent providing more crops than needed for the family, which were also confiscated. Maxim Gorky, a Soviet writer, appealed to the “peoples of Europe and the US” for help. 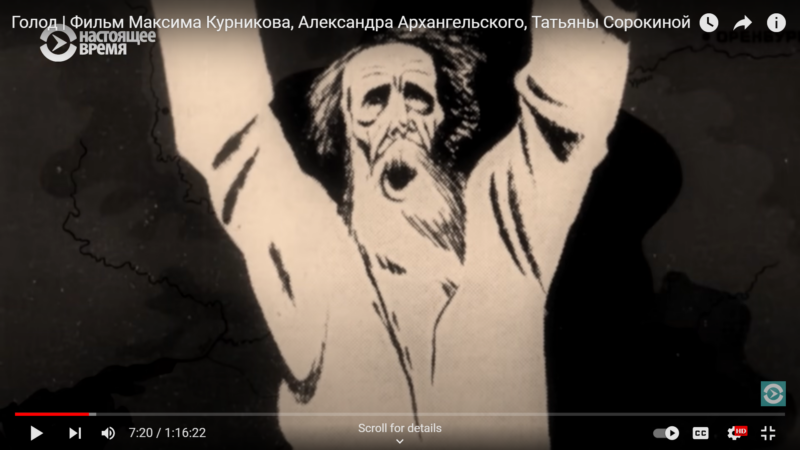 Poster about the Volga famine, appealing for help. Screenshot from the documentary “Hunger” on YouTube.

Herbert Hoover, at that time the US secretary of commerce, had initiated a relief mission (with the condition of freeing American prisoners in Soviet Russia and providing free travel for the relief missions).  Ships with food and medicine were delivered via rivers to the main Russian cities: Saint-Petersburg, Kazan, and others. In total, the US relief administration spent 137 million rubles (approximately 2.2 billion USD in today's value) to provide food though these missions; the Soviet government spent 9 million rubles (or 144 million USD). 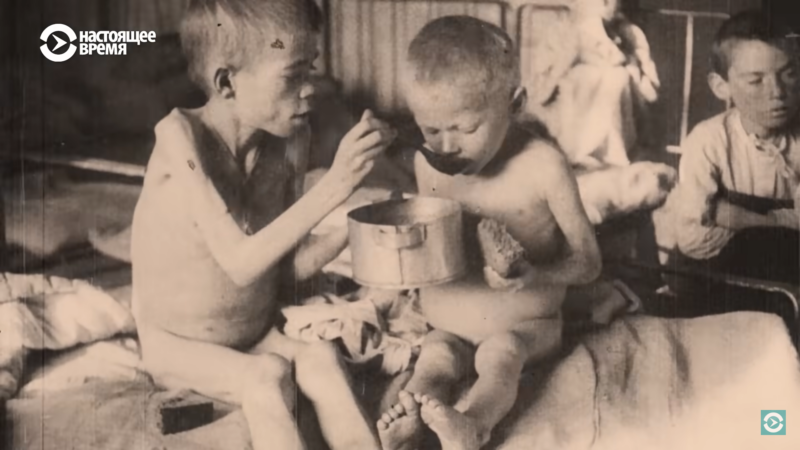 What was different about the US mission was that it did not just distribute the food; it organized canteens where children had to come to and eat their food. The goal was to try to save the youngest. Peasants, with their own understanding of traditional family structure, were used to children dying in large numbers, and did not understand why the weaker ones would be fed, when those who could work needed food more. Sometimes, children brought food home, mixed with weeds or clay, for it to last longer. 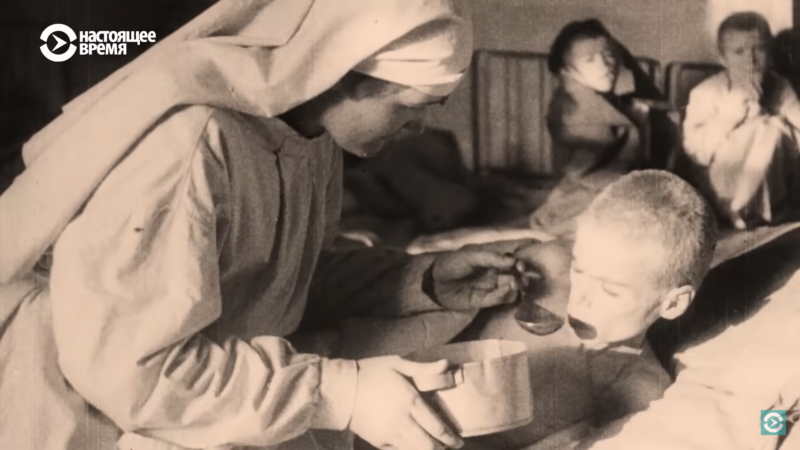 Fridtjof Nansen, Norwegian polar explorer, philanthropist, and 1922 Nobel Peace Prize winner, went to Samara and made photos of the disaster, of the people dying, and gathered around half a million golden roubles (approximately 8 million USD as of today's value) from various charitable organizations in Europe.  He helped people without any preconditions, and his mission helped adults, too. 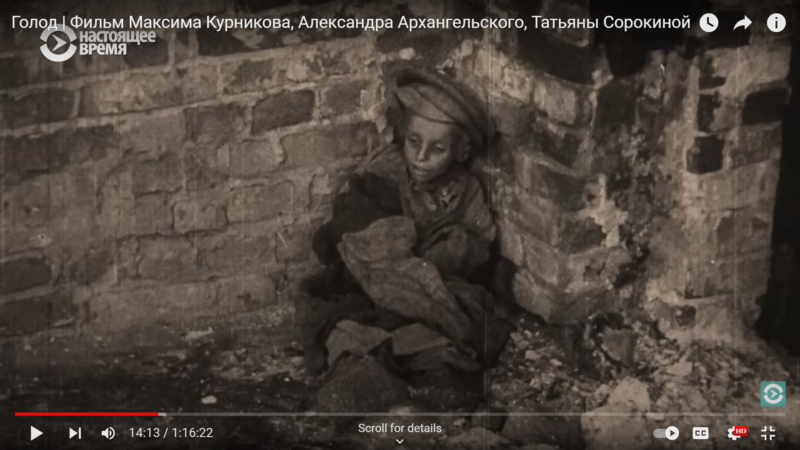 As can be seen in the film, Soviet reports said that the situation was the worst in and around Busuluk village in the Orenburg region. People ate all the domestic animals, including cats and dogs, and there were numerous cases of cannibalism, when people ate the bodies of the dead. 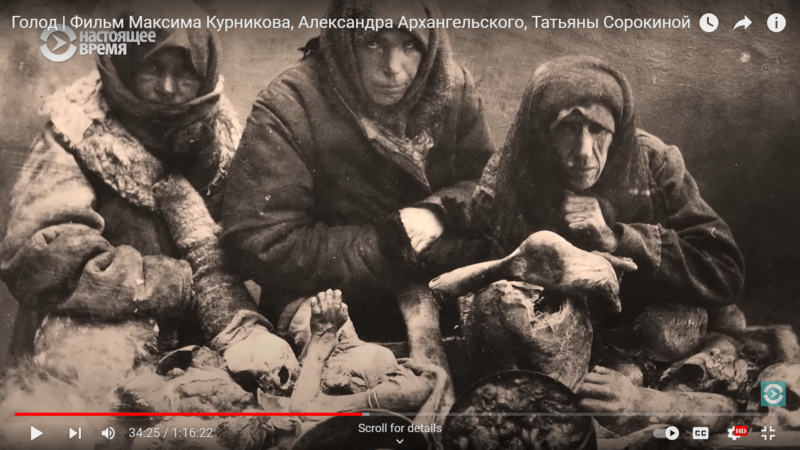 US assistance did not end at providing food to children.  It also helped teachers, educational institutions, and hospitals with equipment, medicine, and vaccines. Apart from the US relief organization, other associations and organizations also came to help, among which were the Quakers. 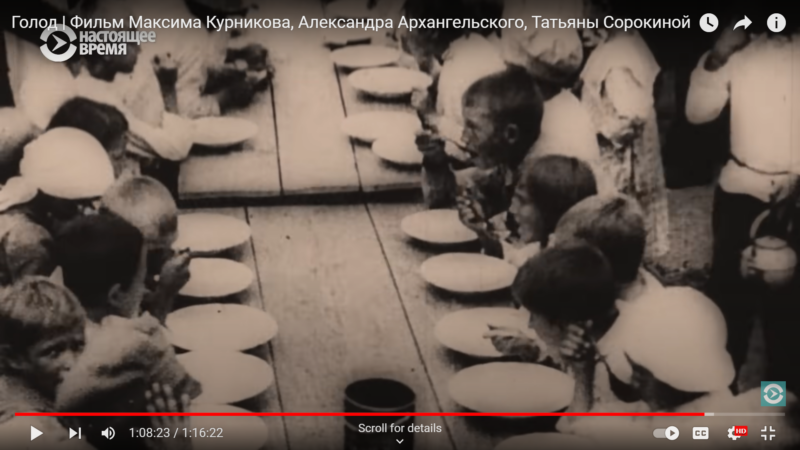 While Nansen’s help is commemorated in Russia, and there is a monument dedicated to the explorer in the Saratov region, the efforts of the United States to help relieve the famine, which were long lasting and profound, were never properly recognized. At least 11 million people were saved by these efforts at that time. 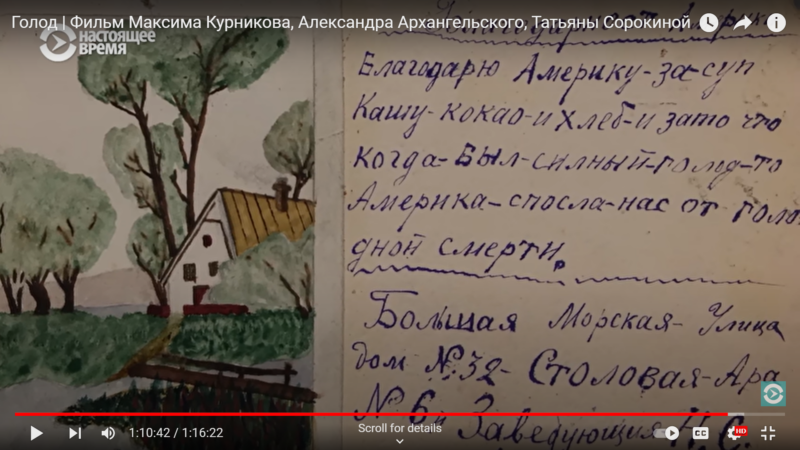 Screenshot from the documentary “Hunger” on YouTube. The letter says Thank you, America, for saving us from death

International help was never again allowed by tSoviet authorities, for neither the famine in Kazakhstan in the beginning of the 1930s, nor for the Holodomor in Ukraine in 1932–33.

From May to December 2022, an exhibition at the The Herbert Hoover Presidential Museum (USA) is showing the story of the US relief administration, which provided food and medical relief during the Soviet famine of 1921–22.