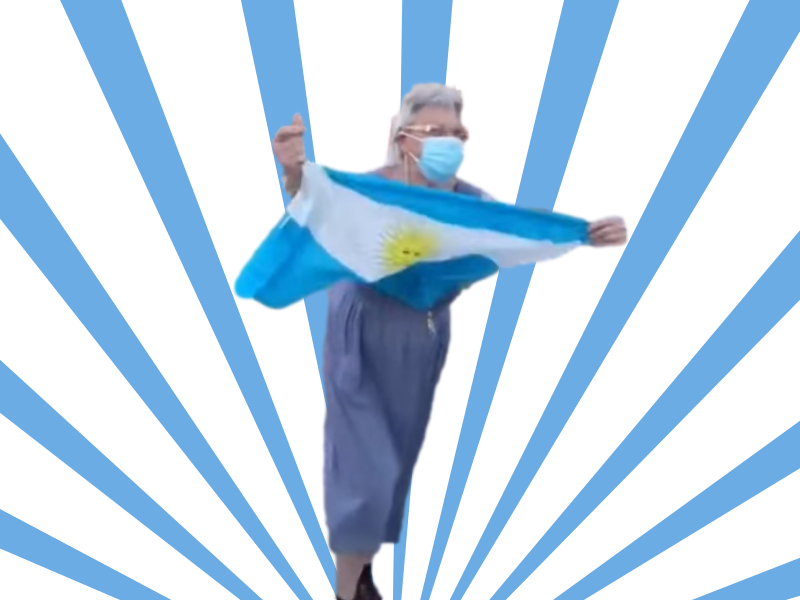 Illustration by Global Voices based on screenshot of María Cristina/Youtube

A 76-year-old Argentinian woman has gained “45 million grandchildren” and is also dubbed “Messi's grandma” following Argentina's rise to the top in the World Cup in Qatar. Football fan María Cristina, who prefers not to share her last name, became viral for her support for Argentina's national football team.

People began singing “Abuela, lalalalala” (‘Grandma, lalalalala’) to her on the streets, and the tune has become a hit throughout the country. T-shirts, mugs and other merchandising items with the slogan have already been created.

Whenever Argentina would win a game, she would leave her home in the neighborhood of Liniers, Buenos Aires, to celebrate on the street. It started when Argentina won against Poland on November 31. Even though she hadn't watched the game, when Argentina won, joyful people in the streets inspired her to go party with them. Then the anthem, going on the tunes of “Go West” by Pet Shop Boys, was born.

Since then, every time Argentina's selection won a game, more and more people throughout the country would sing the song, especially to elderly women who would go celebrate the wins in their neighborhoods. Argentines started singing to them as a ritual for luck in the tournament.

On December 13, after Argentina won the match against Croatia, neighbors in Rosario, Lionel Messi's hometown in Santa Fe province, started singing to another elderly woman who for some reason people assumed was Messi's actual grandmother, though she was not — both Messi's grandmothers have passed.

That “grandma” did not go out but she cheered from her window. Fans were singing “She's Messi's grandma“:

The following video shows another “abuela,” this time in the city of San Juan, in the Cuyo region.

In San Juan we also have an #Abuelalalalala

María Cristina's niece opened a Twitter account for her a few days ago, which already has nearly 30 thousand followers. She uses it to highlight other grandpas and grandmas as well.

“Thank you for such nice messages, life did not give me the opportunity to have grandchildren. I received a loving message this morning that said that I am the grandmother of many Argentines. I am very touched,” she wrote. She also wishes that all the grandparents in Argentina could have as much love as the one she is receiving. She tweeted that she wants other grandpas and grandmas to be part of the spotlight, and asked them to send over their photos.

For Argentinian feminist writer Luciana Peker, it's “about recognition, integration, and a homage to older women who are once again valuable and bold.”

“Grandma is revered, because we do not need queens, and they douse her with foam because soccer is our carnival,” she continues.

To her, the lucky charm, the star of this World Cup…
We are the champions, Abuelalalalalaa!!!