Land was taken from residents and a community forest culled 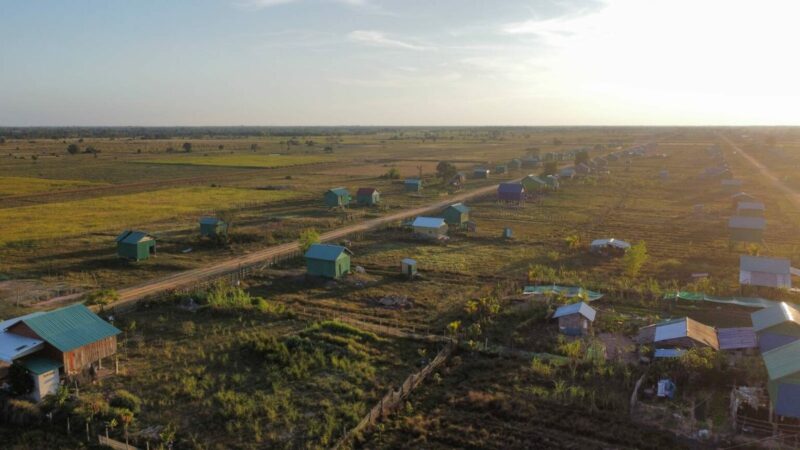 This article by Keat Soriththeavy and Danielle Keeton-Olsen was originally published on VOD News, an independent news site in Cambodia, and is republished on Global Voices under a content-sharing agreement.

In Kampong Thom province, Cambodia, the government has ended a community forest program, and the remaining trees are being removed to create a World Bank project village. On the other side, farmers had land taken away — and their protests quelled with force — to make way for an earlier version of the project.

Both projects are part of the World Bank’s vision to give land and opportunities to Cambodia’s rural poor. Instead, they have left former residents in disarray without their farms or community forest.

VOD reporters visited two land redistribution sites funded by the World Bank in Kampong Thom province. The communities say they lost land and forest in the process, while recipients said the additional land was welcome but has not notably increased their incomes. In some cases, this is because the ground is too arid to grow crops on or too small to produce much rice, the local staple crop.

The World Bank created its Land Allocation for Social and Economic Development project (Lased) in 2007. The project aims to help poor or landless people receive land to “escape poverty and participate in the development of their villages and communes.”

Project documents show that the World Bank began priming a new plot of land in Kampong Thom’s Doung commune in 2014 for the latest phase of its Lased project.

Years before it was distributed in 2019, there were signs this land was already occupied.

Maryam Salim, country director for the World Bank, did not answer a question via email as to whether she knew of any former occupants on the Doung commune land distributed in 2019 or if she knew of a community forest in the new territory. Instead, she said that the Lased II project had distributed 17,000 hectares to 5,091 families by its end in December 2022, with 3,960 families receiving land titles.

When VOD reporters visited Doung commune in late November, recipients of the Lased land said they were living on their new plots about half the time. A half dozen farmers who spoke to reporters said they already had another patch of land elsewhere in the commune before the World Bank project came in and gave them second plots. Because many of them lack any official bureaucratic recognition of their land, such as a title or deed, they passed through the World Bank’s screening process. 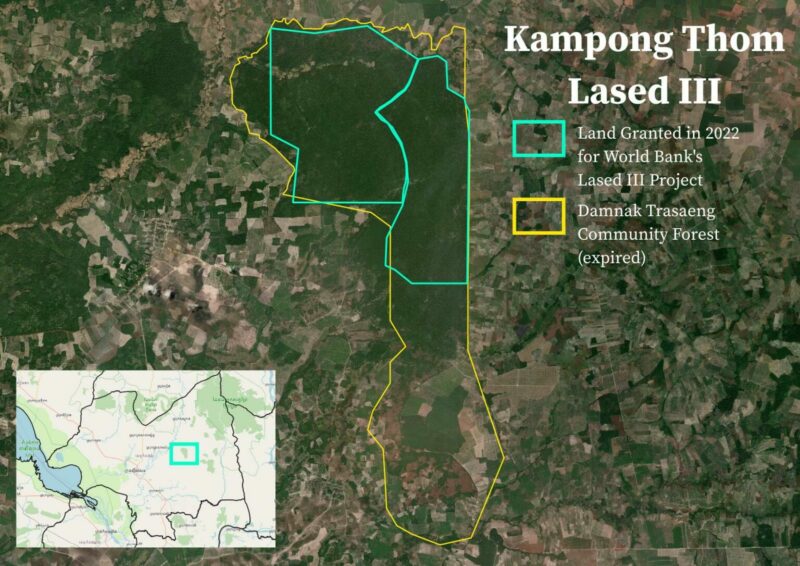 Around four years ago, Thiv Euth said he heard of other Doung commune residents selling their neighboring plots of farmland to a company whose name he doesn’t remember. He passed on the offer and kept his eight hectares.

“That land was from my father, and the reason I didn’t agree to sell it to the company is I wanted to share it with my kids,” Uth said.

The government then came for his land, and when he and other residents protested the loss of their farmland, the province sent armed military police to disperse them.

“We stopped talking about it because we’re scared of getting arrested,” he said of the conflict now. He said at least one protester went to jail.

Shortly after, he and other protesters were invited to apply for pieces of residential land and farmland in the same space he used to occupy. 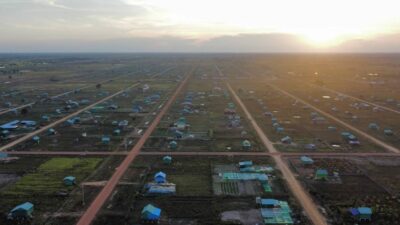 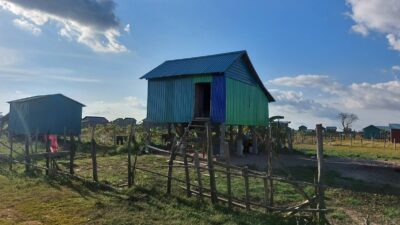 “Those people protested, and they had no choice in the end, so they just applied for their land back,” he said. “I decided to apply too, but it was just too late [to receive a plot].”

Cambodian newspaper, the Phnom Penh Post, reported in June 2019 that residents of Doung commune sustained more than a month of protests under the guard of nearly 100 armed police after more than 470 families had been prevented from accessing their land. The conflict site was only named as a social land concession, not specifically a Lased project, but two months later, the newspaper reported that the government presented Doung commune residents with 2-hectare farm plots and a homestead under the World Bank’s Lased II project.

A summary of the conflict from the human rights organization Licadho says 586 families claimed land within the land concession and that at least one organizer of the protests went to jail for six months.

Since losing the land, Euth, 65, said he struggles to earn enough to support his 12 children, though he has a small plot elsewhere.

“I only depend on the rice field, and now I just have a small piece of land and I have to survive from it,” he said.

Logging of a community forest

Residents around Sroeung commune’s Phum Thmey heard this year from district authorities that their 200-person village would receive new neighbors, said Lao Theary, a 40-year-old who runs a small drink shop on the west side of the village.

Though they’re close to two contiguous Lased concessions in Prasat Sambor and Sandan districts, which were granted in January, she said she had already heard that Phum Thmey residents wouldn’t benefit.

The forest used to have wild pigs, deer, wild chickens, and turtles, but since the new village was announced, about 50 percent of the trees — especially big and valuable trees — have been logged, he said.

“Since Lased came they started cutting down the trees,” he said. The village chief said it was people from other districts who had come to take pieces of the forest.

Sok said he wanted to ask officials to preserve about 150 hectares, which he said had religious significance to residents. He also expressed disappointment that his village was not consulted or included in the Lased plans.

“After they took the land, ​we were discouraged. People felt a sense of loss about it,” he said. “At the end, the benefits went to other communes.” 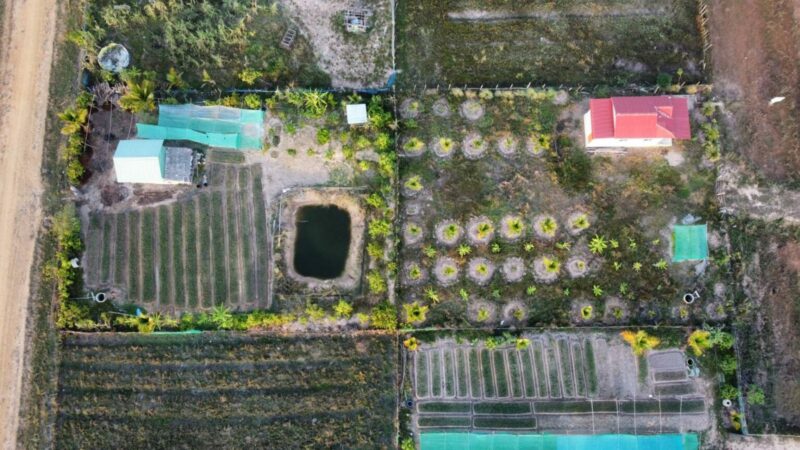 The Damnak Trasaeng community forest only received funding for patrols from 2016–2018, but the volunteer patrols continued long after the payments stopped, said Houng Ouun, a member of the forest patrol.

The community forest used to stretch almost 4,000 hectares, according to a map of community forests compiled by the environmental NGO Recoftc. Ouun said the community forest members were now trying to register the remaining 200 or 300 hectares of forest as a protected area again, but protecting the area was a challenge because of loggers, she said.

“We stopped [patrols] when Lased came,” she said. “They took the forest. We have no hope to work anymore. We stopped. We’re tired.”