Hope prevails as long as Iranians don't give up 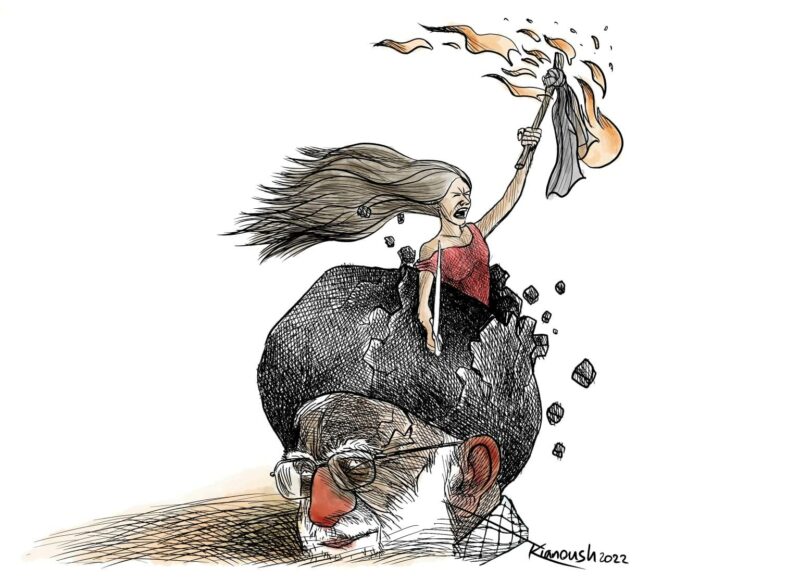 And even though the state has increased its use of draconian tactics to reestablish control, including hurried public executions of young anti-government protesters, it appears to have had little effect on the Iranian people's willingness to put an end to the protests.

With this grim backdrop in mind, Kianoush Ramazani, an award-winning activist and political cartoonist, spoke with Global Voices via Zoom about the Iranian people's resilience during these current protests, as well as the place of political cartoons among other forms of expression for Iranians. 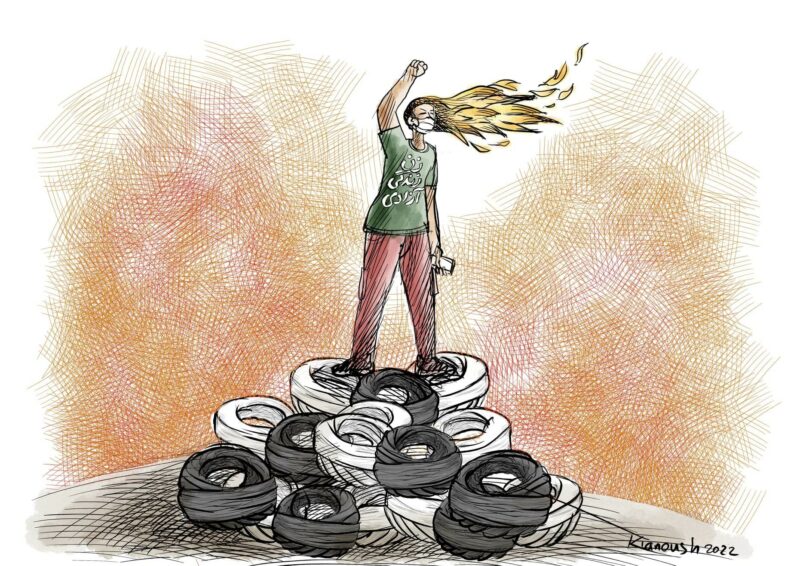 Kianoush contends that the current protests in Iran are distinct from earlier protests, such as the Iranian Green Movement which saw people take to the streets to contest the 2009 Iranian presidential election, resulting in Kianoush's own forced exile in 2009.

They also differ from the nationwide civil protests in 2019-2020, often known as Bloody November, which were sparked by a 50-200 percent increase in fuel prices before escalating into violent anti-government unrest. He explains:

I believe the current protests are different this time because women are in charge. The hijab, which has come to symbolise agony and oppression for women for more than 43 years lies at the very heart of these protests.

When you see women burning their hijabs, even though they are aware of the ramifications and are aware that the Mullas will never allow them to cross this red line, you know it is different.

When you witness such incredible bravery, you understand that this is not 2009 or 2019. During those protests, people only hoped for increased rights not for radical change.

But now, when you see very young girls leading the movement and you see men young and old enduring the bloodshed, you can tell this is an earthquake.

I believe the regime is growing more brutal because they are aware of this.

As Kianoush notes, this unquenched longing for radical change sadly results in greater oppression and death, particularly among young people who dream of a new future where they have more control over their own narratives.

The speed with which Iran carried out the death sentence of 23-year-old wrestler Majidreza Rahnavard, who was hanged on December 12, less than a month after his arrest, validates Kianoush's claim. He elaborates:

Because of recent events, I fear the worst. Since this has expanded into a nationwide protest, the State will murder a large number of people, confirming that the campaign for change is not limited to any group, ethnicity, religion, or region. It has spread everywhere.

Executions have already begun, which is a tragic reaction from a weak State that is making every effort to sow terror. This only enrages the younger generation. They are so different from our generation; we were rather conservative, this new generation has nothing to lose and is more conscious, brave, and exposed as a result of using technology enabled by the Internet.

The state is also too aware of the internet's importance to this young generation, particularly during times of unrest, when they use it to organise protests, document human rights violations, and share what’s happening on the ground with the rest of the world.

As a result, Iranian officials have repeatedly shut down mobile internet connections and disrupted the services of Instagram and WhatsApp, two of the most popular social media services in the country. This action is reminiscent of the Iranian government's nationwide internet shutdown in 2019, resulting in a six-day near-total internet blackout before 1,500 people were murdered in the darkness of the internet shutdown.

Despite his concerns, Kianoush has faith in the resilience of the Iranian people, and he remains optimistic that they will find a way to tell the world about what is going on in the country:

People have figured out how to work around the Internet shutdowns and disruptions. Despite the government's best efforts, people living outside Iran can still communicate with those living inside Iran. I'm still getting enough inspiration from the people on the ground to make cartoons.

Iranian journalists working outside and inside of Iran have also been doing fantastic job, devoting their time to write, disseminate information, and raise awareness about what is going on using whatever sources they can get their hands on, including citizen media.

We hear something new every minute now, the news never stops.

A burst of creativity … and hope 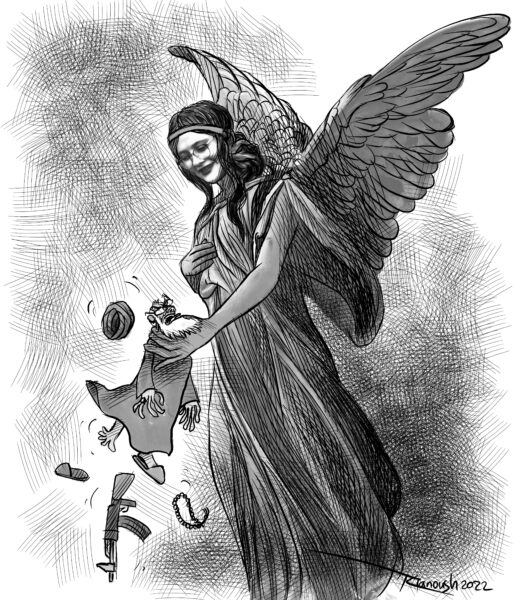 Aside from the incredible amount of information available about and from Iran, the world has become increasingly aware of the outstanding art produced by Iranians both inside Iran and in the diaspora. As Kianoush points out, political cartoons have always stood out among other forms of expression in Iran:

Political cartoons have traditionally been very popular among Iranians. Cartoonists were present at every pivotal moment in Iran's recent history to echo the voice of the people, to tell the stories that people were unable to tell because of what was happening to them and where they were.

For Iranians, it has always been important to see their cartoonists, the majority of whom are regrettably living in exile, speaking their language and informing the world of what needs to be told. It is a show of solidarity, but it has also become a responsibility.

Also, cartoons have another side to them, they are relatable, and people can comprehend them without having to know any other languages. Cartoons can be easily distributed and used in campaigns. I'd like to expand on that.

Political cartoons that reflect Iranians’ struggle to overcome fear have an impact on social and political movements that extends beyond their responsibility to inform the rest of the world about what is going on; they cultivate hope, as Kianoush points out:

When I create a cartoon about Iran, I add another spice: hope.

When there is a movement in Iran, simply illustrating what is happening is not enough. Giving people hope, I believe, will give them more energy and motivation to keep going.

Following the tragic death of Mahsa Amini and the outbreak of protests in Iran, people began to have dreams, hopes, and wishes. My contribution, I believe, is to depict those hopes and dreams in the form of cartoons.

At the end of the day, and despite all the darkness, I am optimistic about the future, because Iranians have not given up. They have officially got over their fear.