Twitter Space: What’s next for the Aragalaya movement in Sri Lanka?

Sri Lanka is facing a shortage of food and inflation 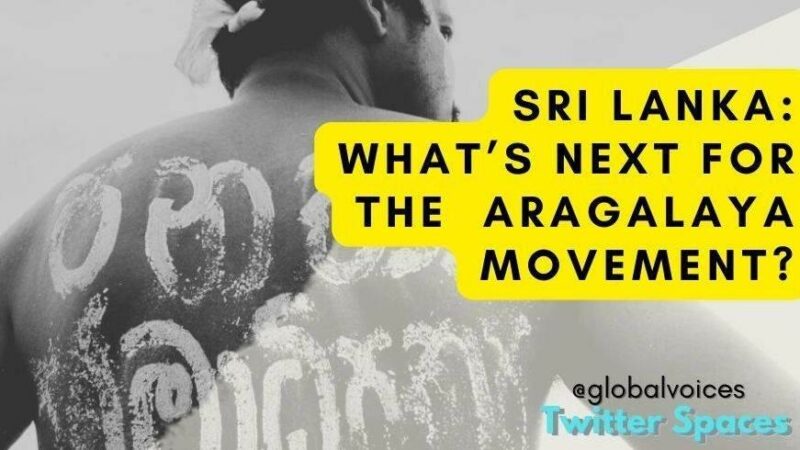 Global Voices launched a Twitter Space on Thursday, August 4, to discuss the political unrest in Sri Lanka from March to July 2022, the nation's economic crisis, and the pro-democracy Aragalaya movement.

Find part one of the recording here and part two here.

The discussions were kicked off by a brief introduction of Global Voices by its managing editor Filip Noubel, who is based out of Prague in the Czech Republic. See quote excerpts from our conversation with our two speakers, Amalini and Sindhuri, below.

If you missed our Twitter Space “Sri Lanka: What's next for the Aragalaya movement? Find part 1 here:https://t.co/totKUKbhQB

The situation in Sri Lanka has deteriorated to the point that social, economic, and political pillars are collapsing, and social upheaval, economic decline, and political insecurity have all contributed to the country and its resident’s impasse. So, people are struggling to make ends meet. They had to ration protein to live and just to go on with their lives. And from March to August, Sri Lanka witnessed a peaceful mass uprising, which resulted in the resignation of the former Prime Minister Mahinda Rajapaksa in May. And on July 9, 2022, protesters forced former Sri Lankan President Gotabaya Rajapaksa to announce his resignation, and he left the country. And Ranil Wickremasinghe, another veteran politician and also the former Prime Minister, is now the president of the country.

The crux of the issue is that we ran out of foreign currency reserves, and we were not able to pay for essential items, including fuel. And Sri Lanka also defaulted on its debt a couple of months ago to the tune of US$ 50 billion.

And my understanding is that this is only the first time this has happened in the Asia-Pacific region, at least in the past two decades. We have a new President, Ranil Wickremesinghe, a veteran politician — I actually never thought I would live to see him become president, which is a position that he's aspired to for as long as I can remember. And his job is now to bring the people together, which I don't see happening. And also to provide an economic roadmap for Sri Lanka and to engage in bilateral agreements with many of its financers, countries like Japan, India, and China, and institutions like the Asian Development Bank. He also has to essentially show the International Monetary Fund (IMF) that Sri Lanka has a sustainable debt restructuring plan in order to have a bailout from it as well. But just in terms of how people are coping, I really don't feel that any of these decisions have significantly been made and that it's trickling down to the people. So the most marginalized parts of society still continue to feel the pinch on a daily basis.

Thank you, Sindhuri. Now we'll talk about the peaceful protests in Colombo. These protests actually started in March and intensified in April and so far gained popular support. Their main agenda is to stand up against the bad policies, the mismanagement of the economy, corruption, and social division that have plagued Sri Lanka for many decades. They were successful in deciding the political fate of the Rajapaksa brothers, but did they achieve their goals?

So first, to start off, the protests started actually, in a very organic sense in neighbourhoods, people just gathering at junctions and you know, the top of their lane to protest. And this started in a very small way. And then it grew to what eventually became the Aragalaya movement.

But what we're seeing now is, like you said, a very accelerated crackdown on people who engaged in these protests. A narrative is being spun, you know, that all these groups that are very easily vilified in society, left-leaning Student Union groups, trade unions, these ones who are constantly made to seem like, “Oh, they're always just protesting, you know, creating inconvenience for people.” These are the people that are now at the top of these lists of people getting targeted, so they are trying to suspend some of these student union leaders, being violent, and inciting people towards violence, things like that.

And at the same time, I'm sure many people saw visuals of protesters in Sri Lanka, gathering outside gathering inside the president's house, where they kind of occupied all these party spaces for themselves and said, you know, “we are taking back what's ours in a way because these are all things that are funded through public taxpayer money.” So you had people enjoying themselves and they posted pictures, you know, sitting on the President's chair, you know, holding his cup or mug or something. And now they are using those photographs and those live videos of people in those spaces, and they're arresting people for engaging in that act of dissent. You know, so you have people, politicians who have robbed the country of billions of rupees. And you are still going after the young man who posted a photograph sitting in the President's official chair. That is the kind of that is that is what we have come to at this point.

When we talk about the goal is has achieved its goals, I think the biggest goal of kind of getting Gotabaya Rajapaksa out of office was definitely achieved. He brings baggage of war crimes, suppressing dissent, suppressing the media, so when he finally resigned, it was an immense moment for people.

But there is a long way more to go naturally. I feel like Wickremasinghe is not the leader that people wanted. They want to be a leader outside of this circle of corrupt, you know, you know, morally bankrupt politicians. It's important that we put on record that he's not here with the People's mandate. He was appointed by a parliament that has also lost the confidence of the people. So this is important to have that context.

Thank you. And now, Sindhuri, how hopeful are the Sri Lankans about the bailout?

What the IMF has made clear is that they want to see initiatives from the country for a sustainable way forward to deal with this debt, they want to see a lid on corruption, or at least plans to mitigate that. They want to see tax reforms because Sri Lanka enforced a few tax cuts a couple of years, which dipped into the country's coffers. And they also want to see what's going to happen with these state enterprises is there going to be privatization and all of that? So it's really unclear.

Amilini, how are the general people feeling about all these changes? Do people see hope? Will this protest continue?

The day after the Rajapaksas, resigned, we still had long queues, still had power cuts, still had a soaring cost of living that the most vulnerable sections of society absolutely cannot cope with. So, there is definitely an understanding among people that a problematic head of state may leave, but there is there a bigger problem that needs to be solved, that there is you know, that the solutions are not going to just change because the leadership changed. The fact remains that the normal is still very much this sense of living in difficulty.

Sri Lanka is facing a shortage of food and food prices are skyrocketing. So for families who are really living on a really tight budget, it means their kids are not going to school anymore, or your kids are eating just one meal a day at the moment. So this is like this is what it looks like. In a practical sense for the people as the protests continue.