The journey of Trinidad's parang music, in one informative podcast

The music was introduced to Trinidad and Tobago from Venezuela 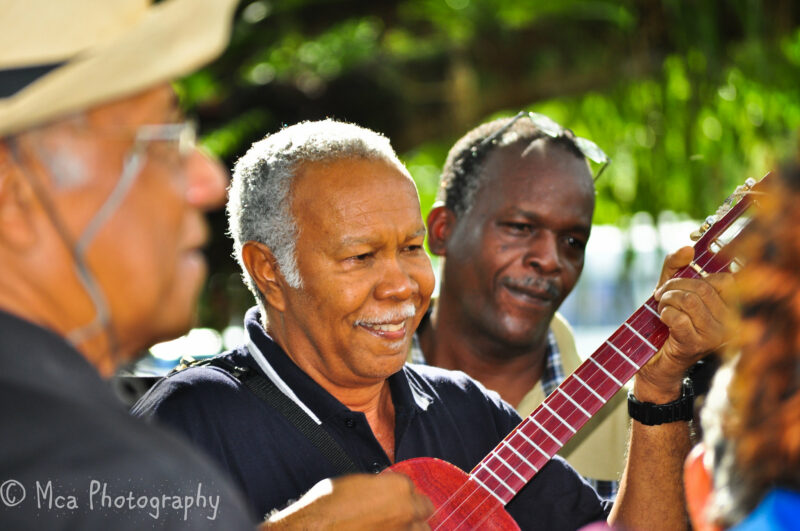 All smiles: a group of musicians plays parang. Photo by Marc Aberdeen on Flickr, CC BY-ND 2.0.

At the height of the COVID-19 pandemic, the Trinidad and Tobago government would hold regular, televised press conferences in order to keep the public informed, but whenever Prime Minister Keith Rowley made an appearance, citizens would brace themselves for the announcement of further restrictions. The phrase “As of midnight tonight” became a dreaded one that spawned numerous memes. With infection rates currently much lower than at the height of the pandemic, one Twitter user took the opportunity to flip the “As of midnight tonight” narrative, announcing:

Parang music is a genre of folk music that is performed around Christmastime. Traditionally sung in Spanish, parang was introduced to Trinidad and Tobago from Venezuela, but the music has deeper roots in Indigenous and African cultures. Referring to the tweet, Twitter user Attillah Springer commented, in Trinbagonian dialect, “Now that we in this state, look someting to listen to and lun bout why parang is so important.” She included a link to her Wajang Diskotheque podcast series, which “brings together past and present literary, visual arts, film and music in different formats.”

The episode, titled “Parang Jam,” was originally streamed in December 2020, when Trinidad and Tobago, like much of the rest of the world, was under pandemic restrictions. The usual merry-making, socialising, dancing and other festivities — including the singing of parang, which is deeply rooted in the tradition of moving from house to house within a community to perform the music — would obviously not have been possible, but the podcast brought some sense of it into people's homes at a time when they needed that sense of connection most.

Narrated by Elisha Bartels and Adam Andrews, the podcast, which explores migration and missing home at Christmastime, is also full of interesting information about the history of parang, liberally interspersed between clips of local favourites.

The song “Río Manzanares ,” for instance, written in 1958 by Venezuelan José Antonio López, tells of loss and longing for home, themes that many may not typically associate with the parang tradition. “At the root is the story of a family displaced,” explain the hosts, “taking a perilous journey into uncertainty. Which of our families do not know this, do not have this trauma embedded in their DNA? Especially in this part of the world where most of us got here in ways that were forced or coerced.”

In recent years, Trinidad has again become a destination for thousands of Venezuelan economic migrants, who must also be longing for home at this time of year.

While many Trinbagonians simply file parang under the “Christmas music” category, the podcast emphasises its importance as the music of a displaced people holding desperately to their mother tongue, memories, and songs from home — and writing new ones to fill the gaps:

Like many of the pre-Christian traditions of Europe, the Middle East and beyond, parang’s history is one of the co-opting of Indigenous and African musical forms to apply them to a Christian context. Parang is not just a music of joy at the birth of Christ, but also tells part of the story of conquest and conversion.

Another song the podcast featured as a way of keeping people going in challenging times was “La Gaita” by Lara Brothers, a group so integral to the parang music genre that is like an institution. The group's founders, Willie, Tito, Antonio and Victor were actually brothers, born in Venezuela in the 1920s. Though the last of the founders passed away in 2014, the band continues to this day, and their music continues to stir memories in people. As podcast host, Adam Andrews says, “To remember the smell of your granny kitchen when the black cake just come out the oven … to remember your great grandfather’s calloused hands that could make people weep at the sound of his cuatro.”

It is interesting too, that parang music thrived in areas like Santa Cruz and St. Joseph, parts of Trinidad known for their cocoa and coffee plantations. The “pañol” workers on these estates, as people of Venezuelan descent are called locally, had little free time to visit family and friends, but Christmas was “a time of relative freedom and they took full advantage.” They would move though their community singing songs that would “start off describing the story of the birth of Christ and quickly shift to secular themes.”

Dancing, with steps that incorporate castellan and salsa styles, is part and parcel of the parang experience. It's near-impossible to hear parang music and not want to move. Again, while parang is predominantly viewed as “Spanish” music, the podcast makes the point that it also contains elements of West African rhythmic and melodic structure; yet, “we never talk about it as African-derived music in the same way that we might consider calypso,” even though Latin America shares the Caribbean's experience of colonialism and the violence associated with it. As Elisha Bartels suggests, if you ever wonder “how a country that hasn’t been a colony of Spain for over 200 years could still be singing songs in Spanish, we remember that seven perilous miles is all that stands between us and Venezuela.”

Extending to Trinidad from places like Sucre in northeastern Venezuela, parang is a unique intersection of Indigenous and African cultures, since long before Columbus happened upon the region, the “Indigenous peoples of the Orinoco Delta used the Gulf of Paria as the gateway to the rest of the Caribbean.”

The podcast also features the inimitable Daisy Voisin, widely regarded as the queen of parang, who dreamed of the music gaining worldwide prominence. Her band La Divina Pastora (The Divine Shepherdess), is named for the Black Madonna statue housed in a Roman Catholic Church in Siparia, the southern Trinidad town from which Voisin hails.

The story goes that the statue was brought from Venezuela to Trinidad by a Capuchin monk who claimed that it had saved his life. Indeed, the Madonna statue is widely revered for her unifying and healing powers. Each year, on her Feast Day, there is a procession attended by Catholics and also by Hindus, who venerate her as Sipari Mai, a manifestation of the goddess Kali. The Madonna was also “sacred to the Warao people as much as to the Catholics,” the podcast notes, “who deemed the Warao’s spiritual practices as devilish.”

One song that powerfully reflects some of the issues Trinidad and Tobago, and the wider region, face is “Mi Negrito” by San José Serenaders, suggests the podcast. The lyrics, heartrendingly performed by Gloria Alcázar, a Venezuelan who came to Trinidad to learn English and eventually married the band’s founder Lennox Flores, tell of the singer's love for a Black man:

In these days when the bodies of women on both sides of the Gulf of Paria continue to be sites of violence at the hands of friends, strangers, lovers, buyers … in these days when women bodies are moved as if they have never known freedom, we reflect on Gloria Alcázar’s words; we reflect on our fear and lust for difference, and our desire for proximity to whiteness, even as we laugh in the face of sinking boats. We reflect on cycles of oppression and how easy it is to dismiss the suffering of others when we haven’t confronted our traumas around race, class and migration.

Parang undoubtedly brings joy, but in understanding where it came from and how it grew, it also offers the opportunity to think more deeply about issues, even as the genre continues to experiment and evolve.

Listen to the full “Parang Jam” episode of the Wajang Diskotheque podcast, here.