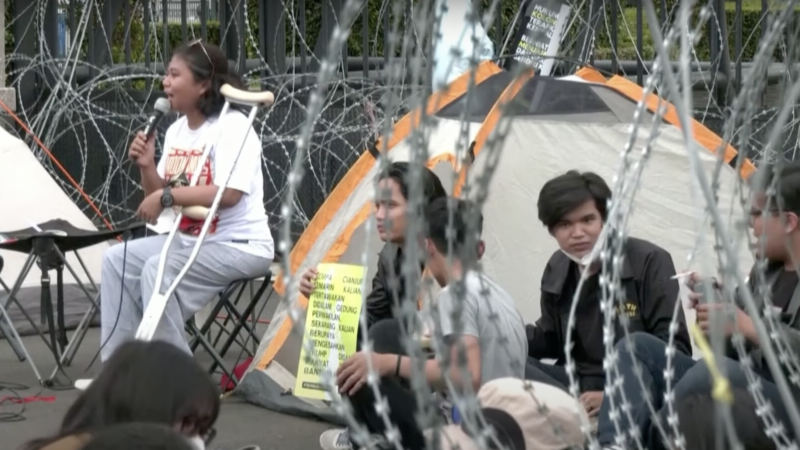 Protestors camped out and demonstrated outside the Indonesian parliament building ahead of the penal code revision vote. Image via YouTube.

Indonesia’s parliament unanimously passed revisions to its penal code (RKUHP) on December 6, 2022, which many activists are calling draconian and undemocratic. While international media outlets have been largely focused on one provision that criminalizes sex before marriage, there are a number of other changes in the penal code overhaul that could harm citizens, choke free speech, erode privacy, and undermine democracy in the region and more broadly.

The changes, part of a decades-long process to revise the colonial-era penal code implemented by the Dutch, were passed despite widespread domestic opposition and protests.

Among the changes is a vague provision that makes it illegal to critique Indonesia’s president, flag, or any state institution or risk three years in prison. Many journalists say this may have a chilling effect on press freedoms and free speech. A coalition of local journalists’ groups, including the Alliance of Independent Journalists (AJI), protested across Indonesia in the days leading up to the vote and cited 19 provisions in the bill that would threaten press freedoms.

1/2 Friends, today several City AJI branches simultaneously held a campaign to #RejectRKUHP. At 11 a.m. WIB, the online action #JurnalisRejctRKUHP will also take place via zoom & can be watched on AJI Indonesia's YouTube. This is a thread containing AJI's actions in several regions. #EveryoneCanbeEffective

2/2 Papuan journalists call for rejection of the planned ratification of the RKUHP. The action took place at Taman Imbi Jayapura and the Papua Province DPR office on Monday (5/12/2022). #EveryoneCanBeEffective #RejectRKUHP #JournalistsRejectRKUHP #DelayBeforeItsCompleted

President Joko Widodo and the Indonesian legislature must reverse course and revise the country’s new criminal code, which poses a severe threat to press freedom. This code marks a significant setback for Indonesia as the world’s third-largest democracy, and could cause members of the press to be jailed for simply reporting the news.

The law also makes it illegal to express any ideologies that contradict Indonesian values (Pancasila), requires people to obtain a permit before protesting, prohibits the promotion of contraception to minors, and broadly bans “fake news.” Additionally, abortion is banned, except in cases of rape, and “black magic” is criminalized, along with Marxism and communism.

Despite the criticism and public backlash, some of Indonesia’s conservative ministers are proudly standing by the law. Indonesia’s deputy justice minister Edward Omar Sharif Hiariej told Reuters, “We’re proud to have a criminal code that’s in line with Indonesian values.”

The reforms represent a significant backstep for the world’s third-largest democracy, as it mirrors policies and laws that have been adopted by authoritarian regimes around the world.

While the new criminal code is rife with threats to democracy, one of the most controversial changes is the criminalization of cohabitation and sex before marriage through the bill’s morality clause. After a barrage of criticism, officials clarified that morality clause violations can only be reported by close relatives, such as a parent, sibling, or spouse. Those who are found guilty of violating the morality clause could face up to a year in prison.

Activists say the law is particularly dangerous to LGBTQ+ people as it puts them at the mercy of family members who may not support their sexual orientation or identity.

While it is too early to tell how the new law will play out on the ground, laws such as this can lead to extortion, blackmail, revenge reporting, and more, according to Human Rights Watch (HRW).

While officials initially emphasized that the law would be applicable to foreigners and locals alike, they have since walked back their language and assured tourists they don’t need to be concerned with the law. This seems to indicate there could be a double standard based on people’s citizenship status — one rule for locals, another for foreigners.

Indonesia has millions of couples without marriage certificates who will be theoretically breaking the law, especially among Indigenous peoples or Muslims in rural areas who married only using Islamic ceremonies, called kawin siri. While the crimes of sex or cohabitation outside marriage can only be prosecuted on the complaint of the husband, wife, parents, or children of the accused, it will disproportionately impact women and LGBT people who are more likely to be reported by husbands for adultery or by families for relationships they disapprove of.

Human rights groups and activists have been pushing back against the provisions for months, with little luck. HRW published a report criticizing the bill, calling it “disastrous for rights” and warning it “seriously violate[s] international human rights law and standards.” Andreas Harsono, senior Indonesia researcher at HRW said:

Indonesia’s new criminal code contains oppressive and vague provisions that open the door to invasions of privacy and selective enforcement that will enable the police to extort bribes, lawmakers to harass political opponents, and officials to jail ordinary bloggers. In one fell swoop, Indonesia’s human rights situation has taken a drastic turn for the worse, with potentially millions of people in Indonesia subject to criminal prosecution under this deeply flawed law. 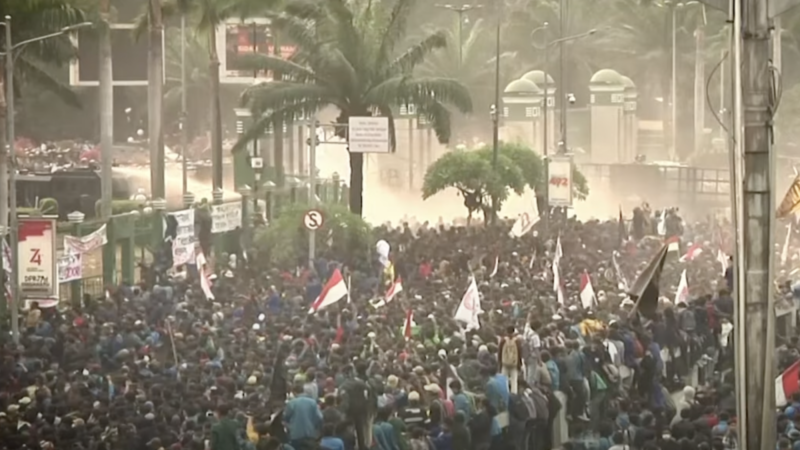 In 2019, officials tried to pass the same penal code revisions, however country-wide protests forced them to pause deliberations. In this photo, police try to disperse a wave of demonstrators with water cannons. screenshot via YouTube

The bill has been debated and in limbo for nearly a decade. Officials tried to pass it as recently as 2019; however, country-wide protests and opposition forced the government to table it and tamp down some of its more extreme provisions. Critics say officials learned from their mistakes and rushed the most recent iteration through the ratification process despite its unpopularity. 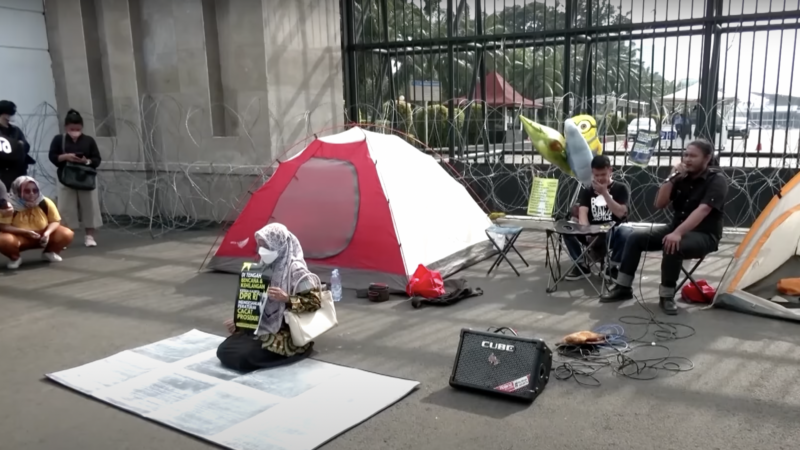 Activists and civil society groups protested outside the Jakarta parliament building in the days leading up to the penal code revision vote. Via Youtube

In addition to activists, the business sector also opposes the bill, with many concerned it may negatively affect investment and tourism in the archipelago. Indonesia’s Ministry of Finance hoped to attract at least USD 89.6 billion in foreign investment in 2023 — a number that may be harder to reach as global backlash over the penal code grows.

Indonesia’s Law and Human Rights Ministry pushed back on these concerns, asserting in a statement: “Investors and foreign tourists don’t have to worry about investing and traveling in Indonesia, because people’s privacy is still guaranteed by law.”

Some analysts suspect that the government was unprepared for the amount of backlash and international attention drawn by the revisions. Since the new code was ratified, officials have been backtracking, trying to assure tourists and investors that Indonesia will remain friendly to foreigners.

Those in the tourism industry are particularly concerned about the law, especially as a flurry of international news reports came out warning tourists that they could be jailed for their premarital dalliances. Maulana Yusran, deputy chief of Indonesia’s tourism industry board, called the new rules “totally counter-productive,” and Bali Governor Wayan Koster rushed to assure people the rules would not apply on the Island of the Gods.

“Based on the provisions of the new Indonesian criminal code, visitors who visit or live in Bali would not need to worry.” He claimed that there would be “no checks on marital statuses at tourist accommodations like hotels, villas, guest houses or spas, or inspections by public officials or community groups.” He added:

Bali is [business] as usual — comfortable and safe to visit. We look forward to welcoming visitors with our Balinese hospitality and advise all parties not to deliver misleading statements regarding the Indonesian criminal code that might disrupt Bali tourism.

The law is drawing concern and criticism from parties both domestic and abroad. The UN released a statement on December 8 stating:

The UN is concerned that several articles in the revised Criminal Code contravene Indonesia's international legal obligations with respect to human rights. Some articles have the potential to criminalise journalistic work… Others would discriminate against, or have a discriminatory impact on, women, girls, boys and sexual minorities.

The UN’s statement drew a rebuke from Indonesian officials who viewed it as overstepping, according to reporting by Reuters.

Teuku Faizasyah, a foreign ministry spokesperson, said, “They should have come to consult, just like other international representatives. We hope they do not hasten to express views, or when there’s not enough information.” 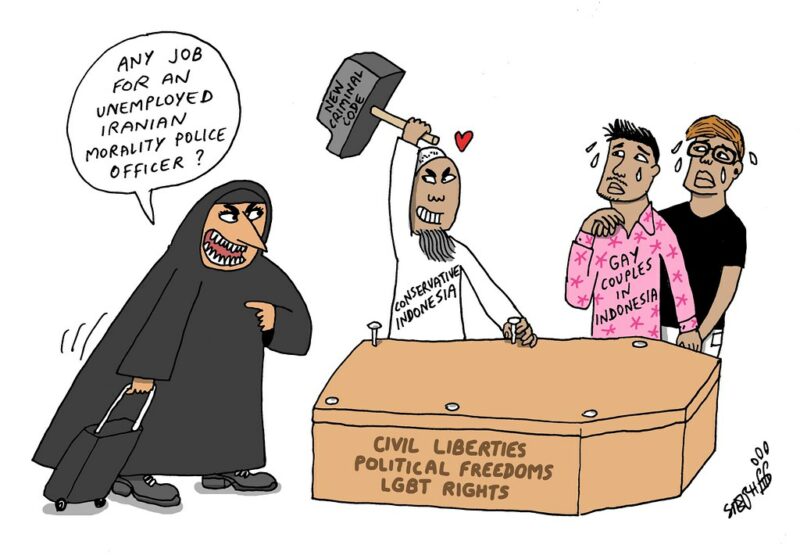 The revisions come just days after the Sweden-based Institute for Democracy and Electoral Assistance (IDEA) released a report warning that Asia was witnessing a democratic breakdown. It concluded that “democracy is receding in Asia and the Pacific, while authoritarianism solidifies.”

The overhaul is a stark reversal in liberal reforms that were enacted in Indonesia after the fall of authoritarian dictator Suharto in 1998, and could signal a more permanent shift toward conservatism in the country.

The changes will not officially go into effect for three years. However, until then, activists say they will continue to fight and are urging EU officials, as well as businesses and investors, to push back against the new penal code.