Imamoglu will remain in power until the court of appeals decision 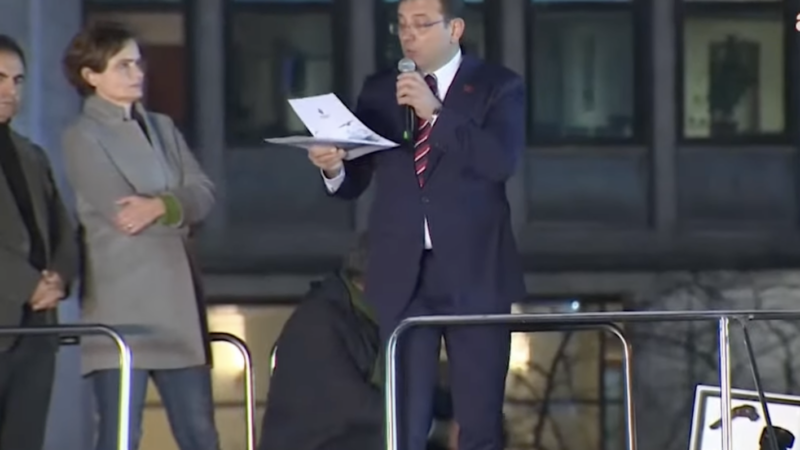 Screenshot taken from the live feed from Sarachane by Yurttas TV.

A court in Turkey sentenced the mayor of Istanbul municipality and a member of the opposition Republican People Party, Ekrem İmamoğlu, to a two-year and seven-months prison sentence on December 14 for insulting public officials in a speech he made after he won Istanbul's municipal election in 2019. He was also banned from participating in any politics in the future. The higher appeals court must uphold the verdict, and until then, İmamoğlu will remain the city's mayor.

Many observers watching the trial said the attempt to take down the popular mayor was the ruling party's attempt to secure a victory in the upcoming general election, scheduled to take place in June 2023.

What is being trialed today in the #Imamoglu case is the legitimacy of the ballot box. Solidarity with Imamoglu today is also a step towards election security in 2023.

The government just declared they are going to lose the election.

Ahead of the trial, the mayor invited Istanbul residents to gather outside the municipal building in Istanbul's  Saraçhane district in an announcement via Twitter:

Saraçhane is a home to 16 million Istanbulites. Just as Istanbul and Turkey have claimed their will before, they will do so today. Regardless of the decision, I invite everyone to Saraçhane at 16:00 to show our joy and our will.

The mayor made his controversial speech shortly after the re-run of the municipal election in 2019, which the ruling Justice and Development party launched after losing control in major cities, including Istanbul. When initial election results were announced in Istanbul in March 2019, the ruling party insisted there was fraud and irregularities. In May, the Supreme Electoral Board canceled the election result citing the ruling party’s allegations of irregularities. But İmamoğlu won the reruns, which took place in June 2019, with 800,000 more votes.

Months after the election in March, İmamoğlu was accused of insulting Supreme Election Board members in a speech he made after the Board's decision to cancel the results in May 2019 by saying that “the decision [to cancel election] affected Turkey’s international standing,” describing the ruling as “foolish.” In May 2020, a prosecutors’ indictment called for a four-year sentence against İmamoğlu based on the speech.

İmamoğlu has denied the accusation. He says the comment was his response to Interior Minister Süleyman Soylu, who criticized İmamoğlu for complaining to the European Parliament about what was taking place in Turkey and calling him a “fool.” However, İmamoğlu never spoke to the European Parliament. Instead, it was during the mayor's speech at the session of the Council of Europe Local and Regional Authorities in October 2019 in which he described the environment in the country in the run-up to the election:

Local elections were held on March 31st in my country in a social climate and unjust conditions where the freedom of press and expression was restricted, the opposition voices could not find a place in the mainstream media and the culture of living together was weakened. Despite all the negative conditions, we were the winners of the night of March 31 with our campaign based on democracy, freedom, respect for the city and people, and the 16 million Istanbulites’ choice of democracy.

Since their victory in the local election, the municipality and its opposition Republican People Party mayor have been in the crosshairs of the ruling party. In April 2020, when Turkey saw its first coronavirus cases, the ruling party accused the mayors of Istanbul and Ankara of illegal activities after the two municipalities announced COVID-19 relief funding campaigns.

In December 2021, the Ministry of the Interior shared a tweet claiming it had identified over 500 municipality employees and related companies with connections to Kurdish militants, leftists, and other controversial groups. In May, the mayor told The Guardian that all of the municipality decisions were “being blocked” by the ruling party because the mayor requires approval from the city council and the municipal government, both of which are controlled by the ruling Justice and Development Party.

Speaking from the top of a bus to the crowd that gathered outside the municipality on December 14, the mayor said the decision was “proof that the rulers of this country have no aim to bring justice and democracy to the country,” resorting to “tricks” to “protect their order.” He also added, “the powers given to us by the nation can’t be taken away by a few. God willing, our fight will become more powerful.”

The reactions to the trial outcome were swift. #Imamoglu and #Imamogluyalnizdegildir (Imamoglu is not alone) were trending on Twitter, and both local and international observers shared their criticism of the decision online.

Cem Özdemir, who is a German politician of Turkish descent and is currently serving as Germany's Federal Minister of Food and Agriculture, tweeted:

After Demirtaş now #Imamoğlu : Erdoğan would like to lock up all his political opponents. Only someone whose power is crumbling acts like that. #imamogluyalnızdegildir

The politician, Özdemir referred to in his tweet is Turkey's opposition People's Democratic Party (HDP) co-chair Selahattin Demirtaş who was arrested in 2016 on terrorism-related charges. After securing 80 seats in the parliament in the 2015 election, the HDP was targeted by the ruling party, having denied the ruling AKP a majority in the parliament. Since then, scores of HDP's senior party members have been arrested on questionable terrorism-related charges. And in June of last year, Turkey's Constitutional Court accepted an indictment seeking the closure of the party. The court is due to make its final decision in January 2023.

In response to the court's decision, jailed Demirtaş voiced his support for İmamoğlu, “how many more ‘judicial’ blows it will take on the will of the people. All unlawfulness will eventually come back against the people's decision.”

Greek politician and a member of the Hellenic Parliament Ioannis Bournous tweeted the following message:

Our solidarity to @imamoglu_int is non-negotionable. In democratic states, political leaders are not sentenced to prison and political bans because of their ideas. We stand on the Mayor's side. The politics of fear must not prevail.#imamoğlu@syriza_gr @europeanleft

In an interview with Bloomberg, a deputy chairman of the Istanbul-based think tank Turkey Justice Research Center, Cem Kaya, said, “the legal process involving the courts of appeals typically takes years, which means İmamoğlu can hold office and compete in elections.”