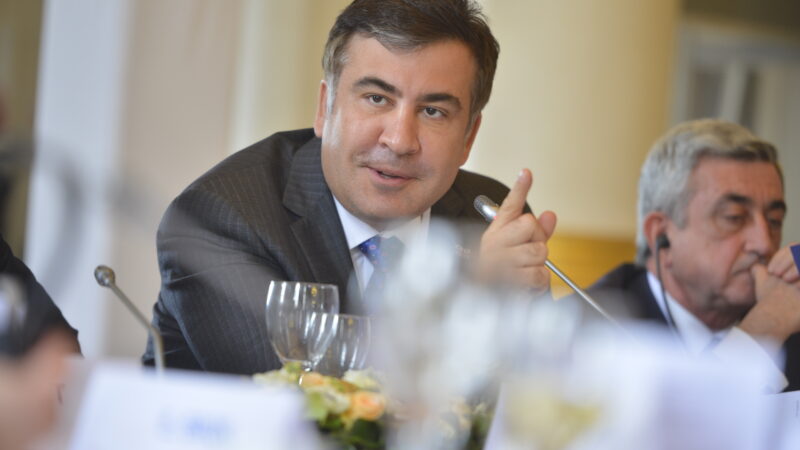 Image by European People's Party. Free to use under CC BY 2.0 license.

Georgia's psycho-rehabilitation center Empathy said in a statement on December 1 that the country's former president, Mikheil Saakashvili, who is currently imprisoned, may die due to health complications unless he starts receiving needed treatment, preferably abroad. The third Georgian President was arrested in October 2021 after covertly crossing into Georgia on the eve of local elections and was sentenced to six years behind bars. He was transferred to a local medical facility in May 2022.

According to Empathy, based on an extensive report by the expert commission with the participation of ten Georgian and six international experts, the former president is suffering from various medical conditions which are impossible to treat in prison. “Timely diagnosis of toxic agents, including chemical compounds and radioactive substances are necessary, otherwise, taking into account the probability of intoxication, coma and death are expected,” read the report.

According to reporting by OC Media, “The former president’s health has been a point of political speculation, as leaders of the ruling Georgian Dream party have insisted that the deterioration of his condition was a result of ‘self-harm’ — a reference to his hunger strikes. Empathy, however, have since stressed that the lack of adequate testing and treatment in Georgia is what now stands in the way of Saakashvili’s recovery.”

Demanding Saakashvili's early release, his supporters gathered outside the office of the ruling Georgian Dream political party on December 4. The party has dismissed Empathy's medical examination report as unreliable.

In an interview with a local television on channel Imedi, Minister of Justice Rati Bregadze said the former president was harming himself and that his “teammates” were trying to “manipulate” and “politicize” his condition.

But the former president's deteriorating health was also confirmed by a group of specialists/experts created by the Ombudsman office. In a statement shared on the Ombudsman's Facebook page, the group confirmed that Saakasvhili's condition “has worsened sharply and is evaluated as serious.” The group's statement also said that the former president lost a significant amount of weight and is suffering from muscle mass loss and fever. “Current treatments are not working. Patient cannot be managed in proactive mode and treatment approaches are limited due to various complications,” concluded the report.

Speaking during a press conference, one of the doctors in the group created by the Ombudsman office said, despite continued treatment, no progress has been made in his treatment and that at this stage, the patient's transfer to a better clinic abroad is necessary, reported Civil.ge.

Saakashvili's legal team also released a separate report, based on the assessment of several US-based doctors, which found arsenic and mercury in the ex-president's system. This toxicology report was shared with Forbes, and according to the platform's reporting, the identified chemicals were the “result of heavy metal poisoning.”

“The presence of these toxic agents in hair and nail samples leads to the conclusion that these agents were introduced after [his] incarceration,” reported Le Monde newspaper.

Georgia: 🇪🇺 follows attentively latest worrying reports about the deteriorating health of Mikheil Saakashvili. 🇬🇪 authorities are responsible for his health & well-being and have a duty to take all necessary measures for him to receive appropriate medical care.

The president of Moldova also expressed her concern over Saakashvili's condition in a tweet:

Deeply concerned by the rapidly deteriorating state of health of #Georgia’s former President Mikheil @SaakashviliM. Every human life is priceless and the gravity of the situation requires immediate transfer of Saakashvili to an appropriate hospital to save his life.

The former president's ailing health has prevented him from attending the hearings in court.