What was talked about in Pakistan in 2022? 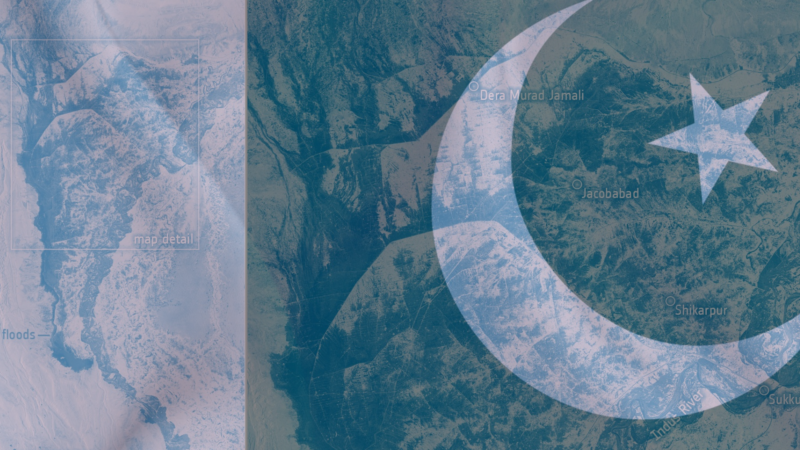 Illustration showing a map of Pakistan's 2022 floods, by Global Voices

This story is part of Undertones, Global Voices’ Civic Media Observatory‘s newsletter. Researchers are reflecting on their country’s media ecosystems, strongest narratives of the year, and what we can expect in 2023. We are kicking off this series with Pakistan. Whenever you click on a narrative, you will be able to see more analysis and related media posts upholding it. Subscribe to Undertones.

In 2022, Pakistan lived through historic floods, the ousting of its Prime Minister (who was then also nearly killed), and an uptick in religious violence.

Anti-military narratives on the rise

One of the most interesting twists this year was the growing anti-military sentiment in the country, a trend that is expected to persist in 2023. Pakistan’s top military brass is considered the most powerful actor in the country, as generals have governed Pakistan for half of its existence and have molded its politics behind the curtain during the other half.

In April 2022, Prime Minister Imran Khan was ousted from power in a parliamentary vote of no confidence a few weeks after he fell out of line with the army’s leadership. Khan, the leader of the Pakistan Tehreek-e-Insaf party (PTI) and an extremely popular and polarizing figure, has openly blamed the military for his deposition, taking his immense following with him on his anti-military crusade. Apolitical commentators and journalists have also openly criticized the military’s omnipresence in Pakistani politics. We have covered this unprecedented trend in Pakistan in this newsletter: “Anti-army hashtags gain rare visibility in Pakistan.”

This narrative may get stronger in 2023 as the country faces general elections between July and September, says Ali Osman, one of our researchers on Pakistan. Another hypothesis is that Khan might soften his stance towards the military to win back their support. It would not be that surprising, as Khan has already backtracked on his tough stance against the United States.

The most vigorous narrative here is “Pakistan's military must stop meddling in the country's politics.” Similarly, Pakistanis have also been pointing out the military’s economic stronghold on the country by stating that “Pakistan’s military is an unaccountable business enterprise.”

Life for women journalists in Pakistan is hard. This year, they have faced unprecedented online attacks and harassment by Khan supporters and government officials. One accusation leveled against them is that these women journalists are being paid by opposition politicians to smear Khan’s reputation. The narrative here is that “female journalists are out to get the PTI.”

“Women also saw sexism being normalized in the broader political discourse,” says Ramsha Jahangir, another researcher. Misogynistic remarks by political leaders made the headlines for Pakistan’s Women’s Day march on March 8 2022, called the Aurat March. One of the main narratives circulating at the time was: “Feminists are trying to foist western values on Pakistan.”

“Misinformation and a battle of narratives are central to the struggle for gender rights in Pakistan,” Osman says.

Women activists, on their part, say that “women journalists in Pakistan are unfairly targeted and subjected to criticism and abuse.” These narratives are expected to continue in 2023, as the military establishment continues to crack down on journalists and civil society members.

Ever since its inception in 1947, Pakistan was meant to be a secular country, but today, the country is perceived by most of its citizenry as an Islamic state, with secularists being in the minority. Secularist principles eroded due to Islamist influence exerted throughout time. In particular, Islamist military dictator Gen. Zia-ul-Haq inserted into Pakistan’s Penal Code the harshest and most controversial blasphemy laws among Muslim-majority countries in the 1980s.

“As these laws do not care for evidence, they have become the worst oppressive tools. They have taken many lives and have also become a boon to the rise of religious extremism in Pakistani society,” Osman says. Many Pakistanis have spoken out against these laws by stating that “blasphemy laws in Pakistan are arbitrary, unjust and lethal” and“violent religious mobs are treated with impunity in Pakistan.”

In 2022, there have been additional lynchings and extrajudicial killings in Pakistan, where punishment is enacted by mobs who take the law into their own hands before arrest or trial. Those supporting extrajudicial violence state that  “mob justice against criminals is an act of bravery and righteousness.”

Other noteworthy narratives that are circulating in Pakistan: