Three Egyptian journalists defied stereotypes by fighting for their liberties. 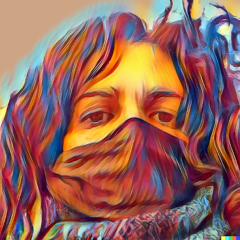 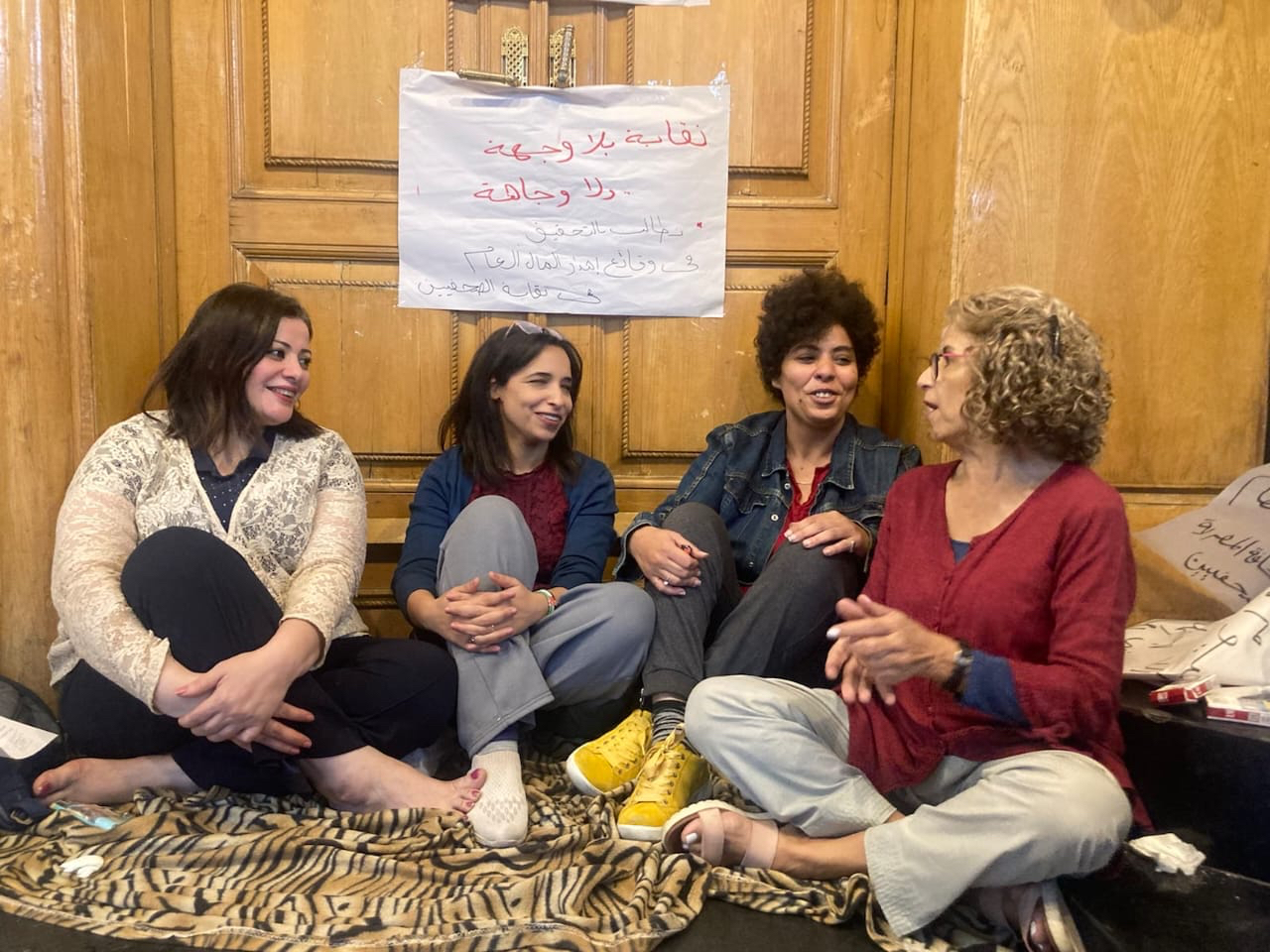 Ala'a Abd el-Fattah's aunt, Egyptian author and political and cultural commentator Ahdaf Soueif (right) appears in conversation with Eman Auf (left), Mona Selim (middle), and Rasha Azab (right back), November 13, 2022 at the Syndicate of Egyptian Journalists. Rasha, Eman, and Muna have the rights to the image, used with permission.

Their sit-in took place against the backdrop of the state being on high alert due to the political storm triggered by COP27, which was dominated by Egypt's deteriorating human rights record. The most notable issues were the plight of 60,000 political prisoners and the campaign to save the life of Egypt's most famous political prisoner, Alaa Abd el-Fattah, who was at a pivotal stage in his struggle for freedom.

Rasha Azab, a journalist and novelist who also wrote the script for the Netflix film “Trapped,” spoke with Global Voices via Signal and Twitter about the seven days she and her friends spent challenging stereotypes and expectations of Egyptian female journalists:

We were talking about public issues with other Egyptian female journalists.

We wanted to keep the idea under wraps so the syndicate wouldn't figure it out ahead of time.

We needed the situation to unfold exactly as it did, with the three of us going to our syndicate as usual and announcing the sit-in.

Cracking a single brick in a high wall

The three journalists have a history of activism in common. They first met at the rallies that preceded Egypt's 2011 Revolution, as Azab recalled:

We used to meet all the time at the Journalists Syndicate … We share a history of struggle. We have a greater appreciation for our friendship after this experience, because it required a lot of trust.”

Their media experience had taught them that effective journalism could not be achieved in Egypt without freedom of expression, and so they decided to challenge the “status quo.”

They realized that the Journalists Syndicate agency had fallen into a slumber and needed a wake-up call to remind it of its role in the public sphere, particularly in relation to political discourse and freedom of expression under President Abdel Fattah El-Sisi. As Azab clarifies, the message they had in mind was straightforward:

The main message is to encourage people to return to their places, defend them, and exercise their civil, political, and professional rights.

The sit-in wasn't an impromptu event. Several pressing issues prompted them to stage it at that time. What stood out the most, however, was the Syndicate's lack of stance on press and media freedoms, despite its main role in the national dialogue:

Several factors influenced the timing of the sit-in. The first is that for three months, there have been conversations about releasing political prisoners. They stated that around 1,200 prisoners would be released in the first wave, yet dozens of people are still being detained on similar charges. Egypt's security policy has remained largely unchanged.

Our stance also included solidarity with Alaa Abd el-Fattah's hunger strike, which exceeded 220 days at the time, and he had abstained from drinking water since November 6, when news about him completely stopped. He has received worldwide support, but nothing in Egypt. As Alaa's friend, I saw that neither he nor us deserved this.

The third motivation was to liberate the Journalists Syndicate, which was responsible for monitoring imprisoned journalists.

Before the sit-in, 30 journalists had been imprisoned, but that number increased by one during the sit-in; Ahmed Fayez. I'm not sure if his arrest following a post he wrote on Alaa Abd el-Fattah came by chance or irony.

These are largely governmental actions designed to keep the Syndicate out of situations like this.

The ideal opportunity presented itself with COP27:

We needed to share some of Egypt's voice right then and there since 40,000 people were in Egypt for the climate summit, and Egypt is a part of the larger world. We thought that there was no better moment than then in terms of personal and content goals.

Confusion, chaos, and fanning of the flames

The stairwell that leads to the Journalists Syndicate is linked to the events that preceded the 2011 revolution. It is an important symbol of Egypt's liberation struggle.

Freedom, life, and victory for Alaa Abdel Fattah, a friend and fighter. The photograph was taken during a protest on the Journalists Syndicate's stairwell in 2007.

However, since his election to the Syndicate chair in 2013, concurrently with President Abdel Fattah el-Sisi's assumption of power, Dia Rashwan has focused on polishing the regime's image and purging the national dialogue of its political content, driven by Egypt’s National Security Agency's (NSA) orders. This has had a negative impact not only on journalists and those interested in preserving freedoms, but also on the NSA's performance and it becoming accustomed to submissiveness and silence. According to Azab:

Rashwan suffocated the Syndicate. He didn't even allow it to become a social club where people could go, sit and talk. He transformed it into a limited civil entity.

Rashwan didn't speak to us during the sit-in, but he oversaw it the entire time. He directed employees to bring him the ID cards of anybody who came to meet us. We expected this, and we dealt with him as part of the security apparatus deployed throughout the sit-in.

Although the Syndicate failed to use the sit-in to generate genuine debate, the discourse was a success in the sense that it revealed the underlying intentions of the different political currents as Azab points out:

Because there were mediators between industry veterans and the journalists, this may have been the most candid discussion in a long time. They were attempting to persuade us to abandon the sit-in.

Faced with pandemonium, the Syndicate Independence Movement declared that this was a solo action by three members without consulting the leaders. They deemed it sudden, hurried and required more planning.

We began the sit-in believing that we were protesting against the authorities, the “general silence in Egypt,” and the suffocation caused by Rashwan, but we quickly discovered that we were in a serious reappraisal with the current, to which we primarily belong.

From left to right, Mona Selim, Emad Auf and Rasha Azab on the last day of the sit-in at the Egyptian Journalists Syndicate. Rasha, Eman, and Muna all have the rights to the image, used with permission

The sit-in's audacity cannot be overstated, particularly given that the three journalists are members of a culture that does not tolerate women who deviate from the script.

Unsurprisingly, concern about the strike's ramifications accompanied the journalists on that voyage:

We decided to protect ourselves when we went to the Journalists Syndicate. Of course, I am well aware that in such harsh conditions, no one is safe, whether they go to their union or walk down the street. Egypt is ruled by tyranny, and tyranny affects everyone, whether they are involved or not.

Any concern for us stems from apprehension about what might happen to us after the strike.

We only told close family members, who needed to know. Iman informed her children and family, and Mona informed hers. The rest found out through the Internet or through friends.

We had to face their concern for us.

Although nothing has happened to them so far, they are still concerned, especially after Egypt blocked the renowned Daraj website, an independent pan-Arab news platform for covering the sit-in, among other things.

Finally, Azab notes that, ultimately, the sit-in yielded small, but important victories for the journalists:

We reinstated a specific feminine voice. Women in Egypt have earned the right to hold positions of leadership in society. Laila Soueif  is leading the world in her quest for her son's freedom. Sanaa Seif leads the world because of her brother Alaa Abdel Fattah.

Women are naturally at the forefront of any recent battle. This was the long-term societal impact of the revolution.