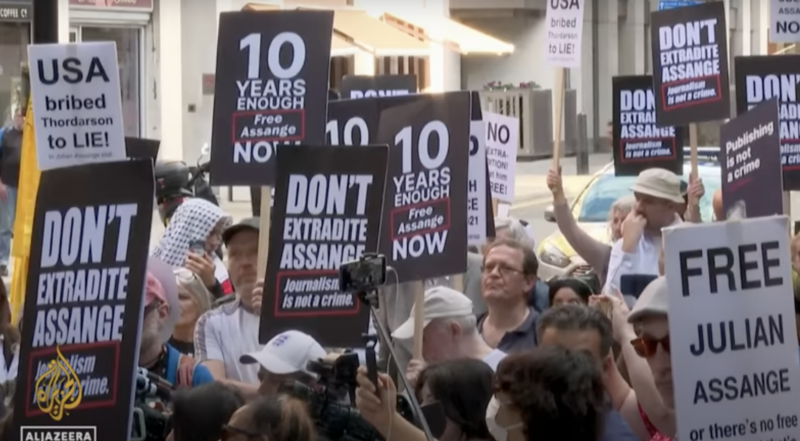 Julian Assange: The threat of extradition and politics behind it. Screenshot from The Listening Post YouTube video

The campaign to free Australian WikiLeaks founder Julian Assange and block extradition orders from the United States is heating up on a number of fronts. At the judicial level, appeals are expected to start early in 2023 in Britain’s High Court of Justice and the European Court of Human Rights (ECHR).

Assange launched WikiLeaks in 2006 as a platform to share news leaks and classified media from anonymous sources.

Assange drew the ire of the US government in 2010 when he published thousands of sensitive documents that he received from whistleblower and former US Army Intelligence Analyst Chelsea Manning. The documents contained information about The Baghdad Airstrikes, the Iraq and Afghanistan wars, and confidential cables between US officials and embassies around the world.

Most recently, WikiLeaks published emails showing the US Democratic National Committee favored then-candidate Hilary Clinton over her competitor Bernie Sanders, just weeks ahead of the 2016 election. And then, in 2017, WikiLeaks published more documents detailing the CIA's electronic surveillance and cyber warfare tactics.

The leaks have not made him popular with US officials. In 2010, the US government began investigating WikiLeaks and issued extradition orders for the founder. With each subsequent leak, officials became more determined to detain the Wikileaks founder.

In June 2012, he was granted asylum in Ecuador's London embassy as a political prisoner, however, this was withdrawn in April 2019. Since then, he has been detained in Belmarsh prison in London, awaiting court rulings over his extradition.

Hopes have been raised for a political solution following remarks by Australia’s Prime Minister, Anthony Albanese, in November 2022. This followed a question from independent MP Monique Ryan during parliamentary question time:

Did you see the breaking news on #JulianAssange?

Yesterday I asked Prime Minister Albanese @AlboMP when he would intervene for Mr Assange's freedom, and he gave an astonishing response: for the first time, he has lobbied President Biden for Mr Assange's release. pic.twitter.com/SYvKC1VO4o

Albanese revealed that he has intervened with the US government seeking “for this matter to be brought to a conclusion.”

The PM pointedly compared the US government's relentless pursual of Assange to their treatment of his one-time collaborator, Chelsea Manning. Manning served seven years in prison until her sentence was commuted by then-Presdient Barack Obama. The comparison was noted and discussed on social media. Former Labor foreign minister Bob Carr’s tweet drew positive responses:

Reassuring PM Albanese has raised Assange with US. But it will take follow-up, even a firm tone. Good that he uses the killer argument: the commutation given to Chelsea Manning – same case but the Yank walks free, the Aussie pursued https://t.co/Q4uGEE0k6m

Assange supporter and member of Mastodon's Universedon community Orange posted the PM’s remarks in parliament calling for a conclusion:

Many people on social media welcomed the publication of an open letter of support by five mainstream newspapers. The Guardian, the New York Times, Le Monde, Der Spiegel, and El País had published excerpts from the Cablegate documents twelve years ago. However, some deplored the time it has taken for the media to speak up:

That’s great news but the fact its taken 12 years speaks to how low journalism has sunk in standing up to power.

Others on Mastodon joined this criticism of the media for their silence until now. Roberto Resoli linked to an Italian translation of the letter:

There has been praise online for Brazil’s President-elect Lula da Silva who joined other Latin-American leaders, such as those of Colombia, Argentina, and Mexico, in calling for an end to Assange’s prosecution. Anonymous Assange campaigner, Ghosty, thanked journalist Kristinn Hrafnsson, editor-in-chief of Wikileaks, who met with Lula:

Thank you 👌@khrafnsson 🙏🥰 and thank you also to the president-elect of Brazil Lula da Silva Julian Assange is a real hero that everyone should support instead of languishing in a high security prison where he risks his life for doing justice. The fight continues#FreeAssange pic.twitter.com/9NnqWJ6x4g

There are numerous Facebook groups in support of Julian Assange, with membership numbers varying from tens of thousands to just a handful. The Free Julian Assange group has over 33,600 and has regular updates on local protest events around the world.

Meanwhile, a change.org petition, which has attracted nearly three-quarters of a million signatures, has updated its webpage to include PM Albanese’s comments.

Over on the “bird site,” as many Mastodon users refer to Twitter, its new head honcho, Elon Musk, launched a poll of his own on the issue:

Over 3 million anonymously responded to a Twitter poll by Elon Musk on whether Snowden and Assange should be pardoned — users from anywhere around the world. And the result was 80 percent in favor of pardons.

That makes sense. The US government has faced global pushback. pic.twitter.com/xHO4obHWoy

Musk's tweet reflects a growing sense of urgency about the campaign: