In defense of whom? Protesting Jordan’s perpetual state of emergency

A state of emergency under the guise of social protection 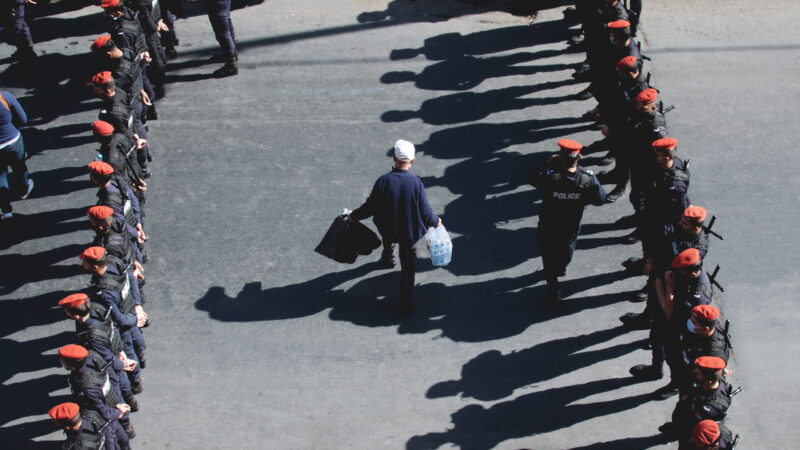 A person passing between lines of police amidst protestor’s chants, displaying indifference to the protest. Image by Raya Sharbain. Used under a CC BY-SA 4.0 license.

The author of this article prefers to remain anonymous for security reasons.

Perched on a small balcony of a dilapidated house in downtown Amman, I was observing the ongoing protests on the streets below me when a voice to my right asked, “Which outlet do you work for?”

“Wikipedia,” I said, adding, “and where do you work?” He looked at me intently and replied “Preventative security.” Keeping my cool, I burst out: “Yeah, I guessed as much. You should change the way you dress, all of you [intelligence officers] look the same.” “Do we all wear white t-shirts?” He said snarkily at my words.

I did not want to stop the conversation yet. “How long have you been working with state security?” I inquired. “Since the dead sea was alive,” he joked. “May the dead sea rest in peace,” I said. “And what's your name?” I was quiet for a moment, I needed to think fast what name to give, “Aisha!” I finally said. (Note: Aisha means alive in Arabic).

He stood there with his colleagues, distractedly monitoring the protest from above. The crowd kicked off their chants immediately after Friday prayers at Al Husseini Mosque in downtown Amman.

This protest took place a year ago, on Friday November 12, 2021, when a number of local political parties and Herak members assembled to protest rising prices and seeping corruption (with direct reference of the then recently-leaked Pandora Papers), and, pointedly, to call for the repeal of the Defense Law. The Defense Law was passed in March 2020, two years and a half ago, to mitigate the negative health and economic effects of the COVID-19 pandemic. 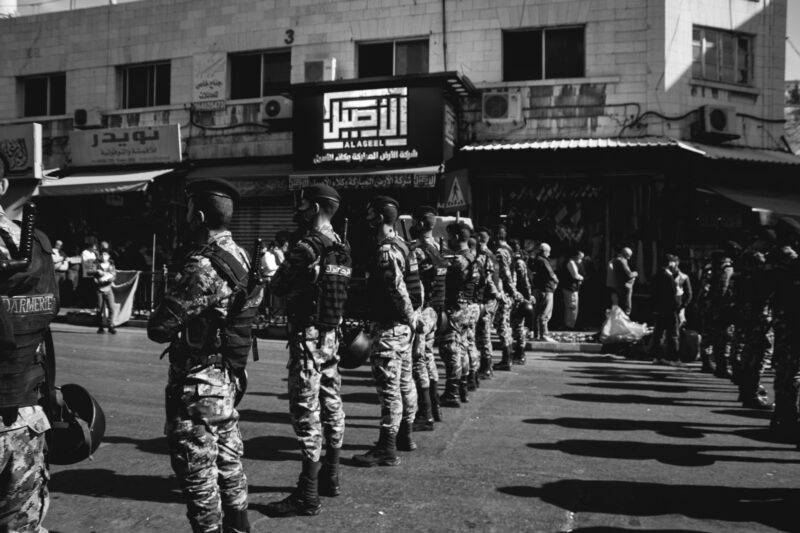 As demonstrators observe Friday prayers, police position themselves in preparation before the protest. Image by Raya Sharbain. Used under a CC BY-SA 4.0 license. 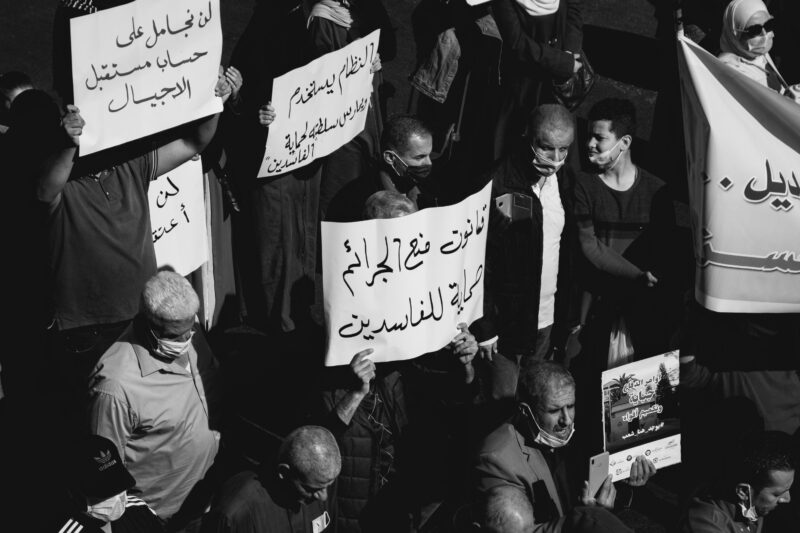 Defense orders without any checks and balances

When activated, this law gave Jordan’s prime minister broad powers to issue legal orders — known as “defense orders” — quickly and with immediate effect. These defense orders supersede regular laws and are instantly enforced without any checks and balances.

Defense orders include enforcing the use of masks (Defense Order #20) and criminalizing the dissemination of “fear mongering” news related to the pandemic (Defense Order #8). There are currently 36 defense orders, many of which are still in effect; others have been cancelled in order to facilitate people and trade movement.

One protest sign read, “Defense orders are used as a levy and to muzzle voices.” Jordanian authorities have used defense orders to quell many forms of protest and assembly. Defense order #16 was specifically used to charge and detain protestors and activists under the spurious premise that their “gathering” worsens the epidemiological situation. This is despite the fact that the ministry of health has stopped issuing daily reports of COVID-19 cases and deaths, conceding that the virus has become endemic.

Human rights organisations question the need for the Defense Law, but, according to recent reports, the government intends to keep it in place as long as the World Health Organization has not declared the pandemic over. 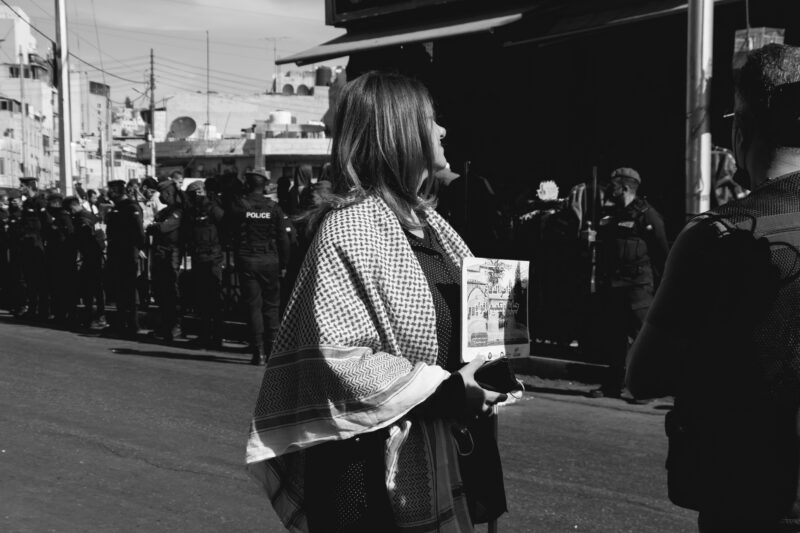 Jordan Labor Party Secretary-General Rula Alhroob is being interviewed. She's holding a sign that says, “Defense Orders are used as a tax and to silence voices.” Image by Raya Sharbain. Used under a CC BY-SA 4.0 license. 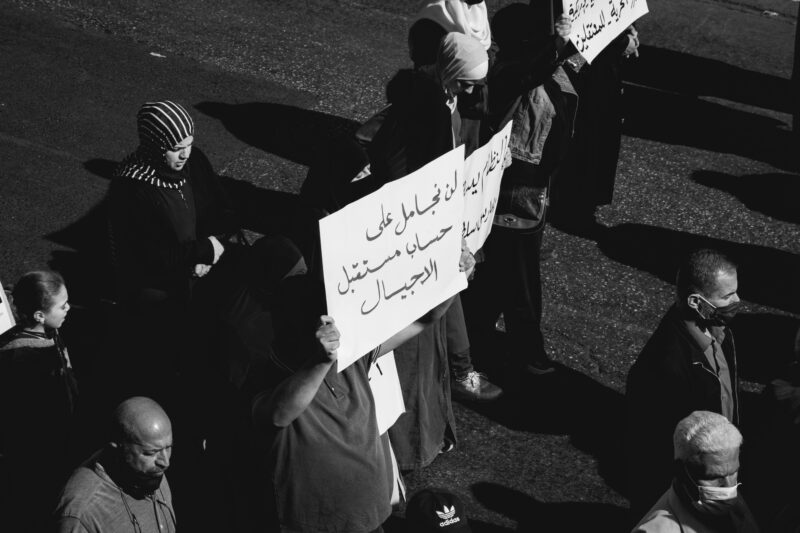 Protest signs read “We will not be complacent at the expense of future generations.” Image by Raya Sharbain. Used under a CC BY-SA 4.0 license. 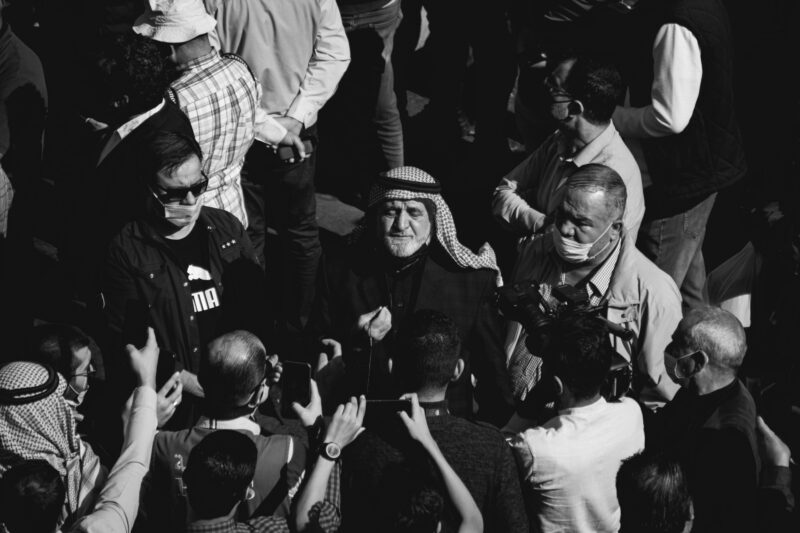 Reporters gather around a member of the Partnership and Salvation Party. Image by Raya Sharbain. Used under a CC BY-SA 4.0 license.

State of emergency under the guise of social protection

While the king has announced a plan to halt defense orders in the coming months in May of 2022, the government continues to justify the law’s enforcement by claiming that it protects people’s jobs and keeps them out of prisons. This refers to defense order #28, which prohibits the imprisonment of individuals with debts less than JOD 100,000, as Jordan is one of the few countries that still imprisons people for unpaid debt.

The government claims this is the last possible extension for the defense order, implying that recent amendments to debt imprisonment laws should suffice to keep people out of prisons. However, according to reports, over 148,000 people face incarceration if this specific Defense Order is shelved.

Furthermore, Defense Order #6 barred companies from cutting wages and mandated that employees be retained until the coronavirus was eradicated. Nonetheless, foreign NGOs were granted an exception and were able to make employees redundant even while the defense order was still standing.

Recently, local trade union leader Mazen Maaytah expressed his support for the Defense Law, claiming that it played a major role in protecting workers in light of rising prices and unemployment.

Journalist Hebatulhayat Obeidat tweeted her response to his support:

The public landscape and the prevailing silence may imply that it is a genuine opportunity to exploit it and intrude by using power in the wrong place. However, only the political “teenager” can see this explanation, because this silence will be followed by a latent explosion after the citizen realizes that he has lost everything he owns. 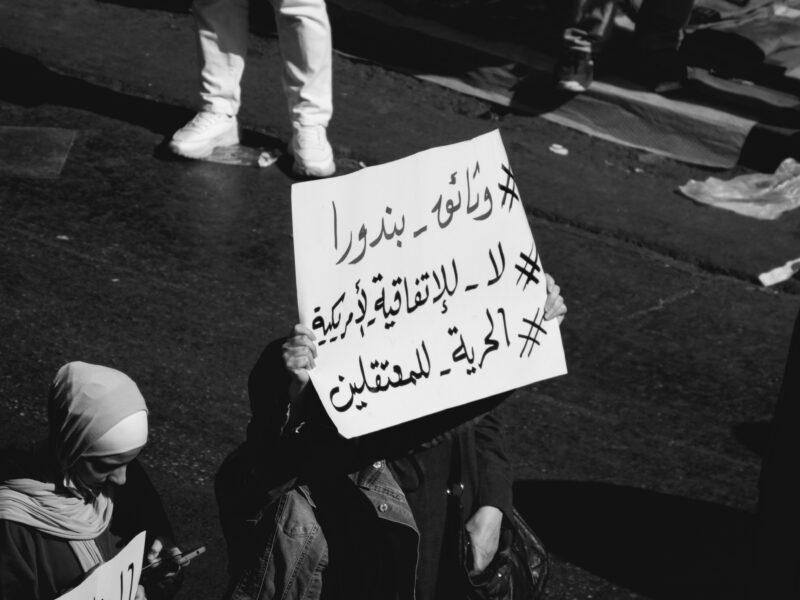 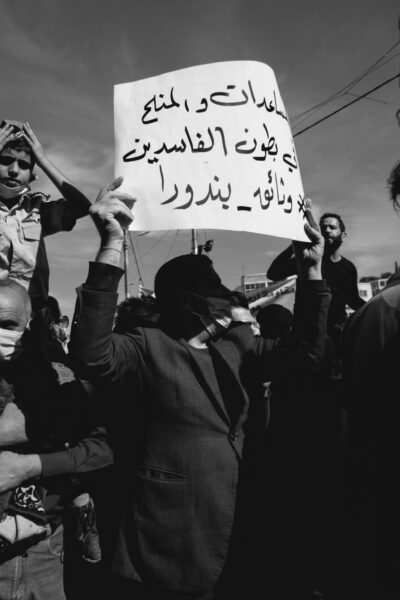 Protestor holds sign that reads “Aid and immunity in the bellies of the corrupt #PandoraPapers.” Image by Raya Sharbain. Used under a CC BY-SA 4.0 license. 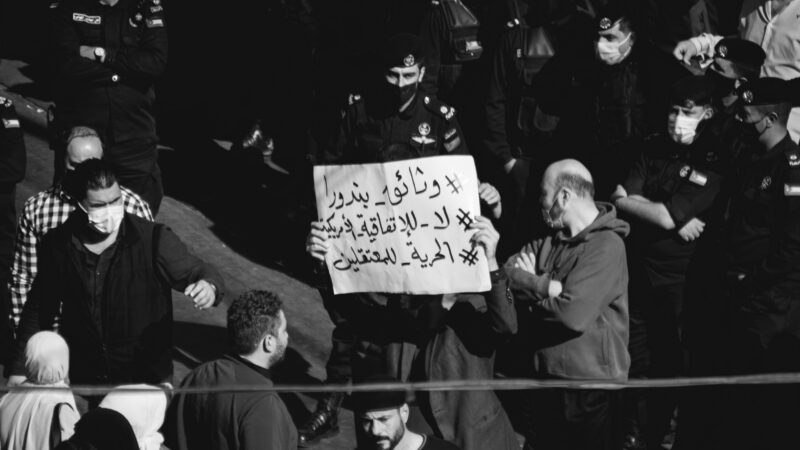 No place for the frustrated and desperate

Today, little is said about the Defense Law, and one can comfortably assert that the topic is not on the public’s radar. Social protection is used as a pretext to advocate in favor of maintaining this state of emergency.

The vice chairman of the National Center for Human Rights’ Board of Trustees went so far as to claim that the Defense Law has guaranteed human rights protection in these “exceptional” circumstances.

Social media influencer Sultan Ajlouni tweeted his comment on the arguments for extending the defense law on October 16:

I say mix this positivity with water… Oh wait you saw the dams, there was no water. Then spray this positivity on us from planes or inject it in us instead of the covid vaccine and this would be an argument in favor of extending the defense law.

As repression continues, King Abdullah II confirmed on November 13, 2022, while opening the Second Ordinary Session of the 19th Parliament that the country “has no place for those who are frustrated and desperate.” 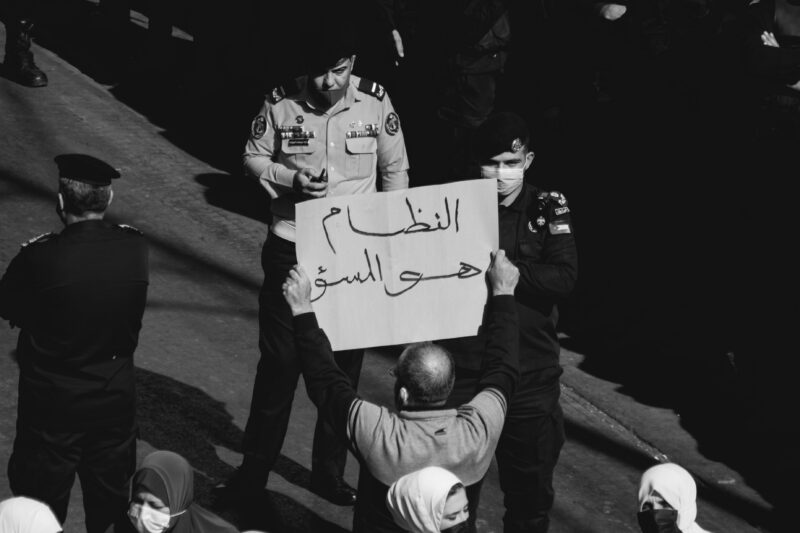 Protestor holds a sign that reads “The system is responsible.” Image by Raya Sharbain. Used under a CC BY-SA 4.0 license. 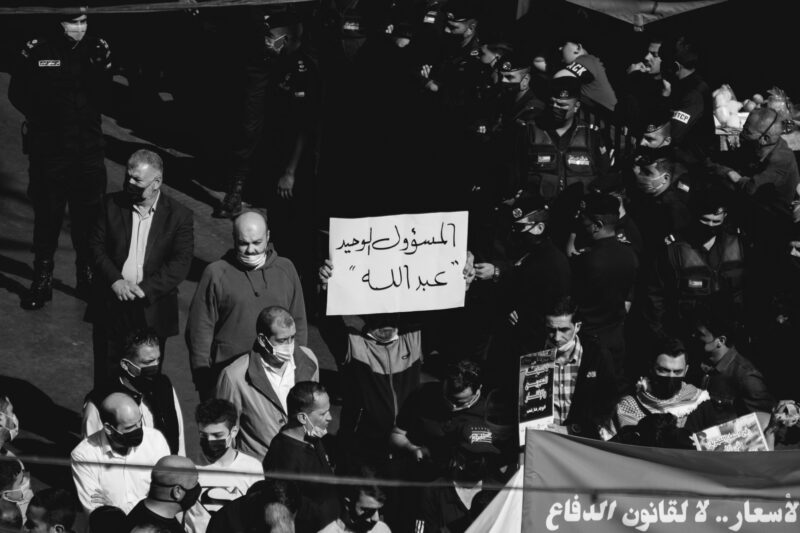 Protestor holds a sign that reads “Abdullah is responsible.” Image by Raya Sharbain. Used under a CC BY-SA 4.0 license. 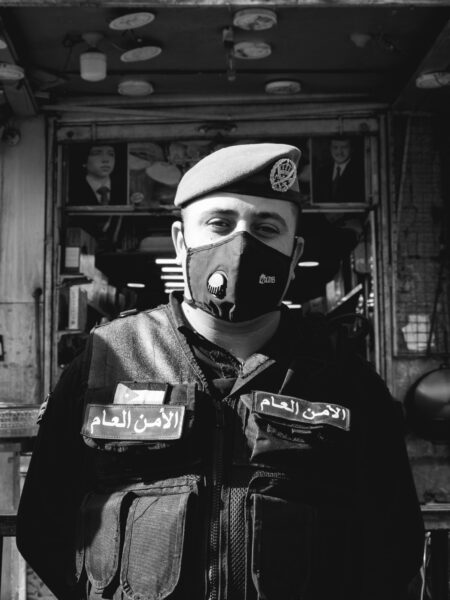 In the foreground a public security official stationed at the protest. In the background a storefront displaying pictures of the king and crown prince on opposite ends of the store sign. Image by Raya Sharbain. Used under a CC BY-SA 4.0 license.