'There is much work still to do' 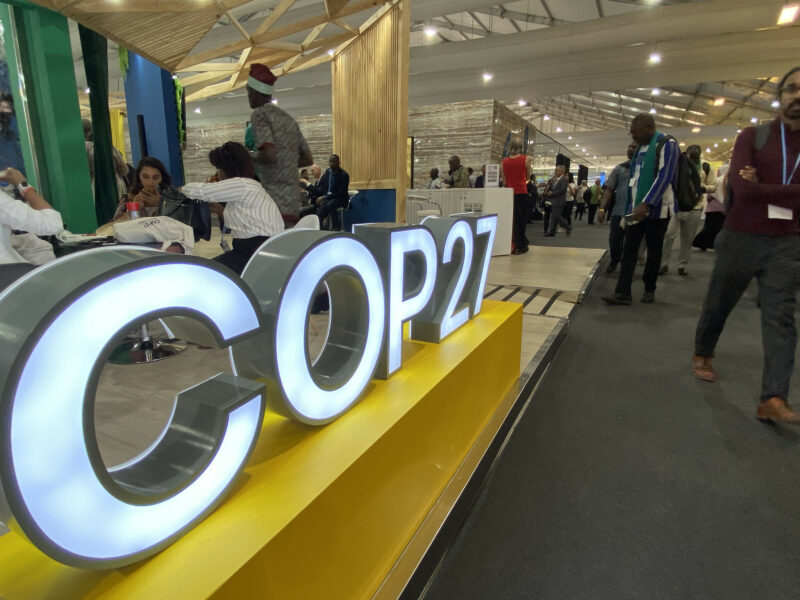 On my two-day journey back from the land of Koshary (Egypt) to the land of Doubles (Trinidad and Tobago), I reflected on the opportunity I had through Climate Tracker to work with and support a team of 22 journalists from the Global South at COP27. Yet, throughout my reportage on this critical climate conference, I was bombarded by messages and videos about the destruction back home — the worst floods the country has experienced since 2018.

One orange level alert after another, even from Egypt, I witnessed humans, cars, and animals being swept away, houses being submerged beneath merciless waters, and entire masses of land collapsing onto roadways and off of cliff sides. I’m not even exaggerating. In the coastal area of Manzanilla, the roads broke away to such an extent that entire villages were left stranded. To evacuate, people had to carefully cross with the help of ropes.

So, like many other reporters from the developing world, even as delegates and activists assembled against a dismal backdrop of multiple crises (energy, cost of living, indebtedness, nature loss, and geopolitical tensions), I had a vested interest in the outcome of COP27 which, in its lead-up, was touted to be one of “implementation.” But was this achieved? Where do we go from here? Here are some key takeaways, now that the dust has settled.

Loss and Damage stole the show

A pressing need to safeguard the most vulnerable led to a historic decision at the start of the conference, one that would shape the narrative throughout our time in the Sinai peninsula. After 30 years of negotiating, funding for Loss and Damage (L&D) was finally added to the agenda. Nice start. But we eagerly awaited the outcome of the L&D discussions. Would all the talk lead to any concrete decisions?

The Alliance of Small Island States (AOSIS), Least Developing Countries (LDCs) and the Independent Association of Latin American and Caribbean (AILAC) declared the COP as one of Loss and Damage inaction. Then, at the last minute, after I lost count of how many times the closing plenary got postponed — and more than 24 hours after the COP itself was meant to be closed — parties agreed on the establishment of a dedicated fund for Loss and Damage.

This is a momentous achievement for developing countries, but considering the fact that developed countries have failed to deliver on their 100 billion US dollar climate finance pledge from Copenhagen in 2009, there’s little trust left.

Avinash Persaud, special envoy to the Prime Minister of Barbados, stated in the closing speech:

We have a historic decision to establish a Loss and Damage fund for countries acutely impacted by the warming climate. It was the result of the strong leadership by the small island states with an amazing degree of solidarity shown by the rest of the world, from the major industrialising developing countries and the developed ones. It is a small victory for humankind. Now we need to redouble efforts behind an energy, transport and agriculture transition that will limit these climate losses and damages in the future.

As a matter of fact, parties agreed that the Loss and Damage fund was the major achievement of the COP, as there were conflicting evaluations of how well the other broader outcomes demonstrated (or failed to demonstrate) steadfastness on implementation and higher ambition. This is important to note as we head into COP28’s Global Stocktake, which will assess the collective progress towards achieving the purpose of The Paris Agreement and its long-term goals, and inform the Nationally Determined Contributions being brought to the table in 2025.

More is needed on mitigation

There’s a general view that not enough attention was given to reducing emissions; this was especially evident in discussions on the “work programme to urgently scale up mitigation ambition and implementation in this critical decade,” formed at COP26.

COP27 witnessed a debate between countries on coal versus fossil fuel reductions, and saw Antigua and Barbuda calling out China's high emissions and need to also contribute to L&D funding, to which China explicitly stated it had no intention of doing.

This back and forth marked its impact on the negotiations, seeing days go by with little progress on critical issues, missing the opportunity to move forward from Glasgow’s mitigation work programme and confidently address fossil fuels and emissions.

For some of the world’s most vulnerable countries, including the Least Developed Countries (LDCs), AOSIS, and AILAC, emissions that lead us beyond 1.5 degrees Celsius are an existential threat. Some high- and middle-income developing countries and major emerging economies have noted the pressure to further reduce emissions, although they’re not historically responsible for climate change — an awareness that calls to hand the principle of Common But Differentiated Responsibilities (CBDR) enshrined in the 1992 Convention, which requires developed countries to take the lead in climate action and support.

At COP26, parties endorsed a call to “phase down” unabated coal power. In Egypt, however, India and a few other countries declared that this should extend to all fossil fuels. In his press briefings and plenary speeches, European Union climate lead Frans Timmermans said that the L&D fund must go “hand-in-hand” with stronger efforts on 1.5°C, and threatened to “walk away” from a “bad decision,” warning that “we cannot accept that 1.5°C dies here today.”

Ultimately, they all backed the Sharm El-Sheikh Implementation Plan, although perhaps with genuinely heavy hearts and visibly sleepy eyes, a deal which consistently failed to include fossil fuel phase down (or phase out) in its successive drafts of the cover decision and instead, watered down mitigation with a simple mention of “low-emission and renewable energy.” This kind of language is riddled with loopholes, prophetically leaving us all sinking.

A common sentiment throughout the two-week conference was, “Is this even an African COP?” There were high expectations for COP27 to deliver on adaptation finance, a key area of importance for both the continent and Caribbean countries.

As Ugandan climate justice activist Vanessa Nakate stated, “COP27 was meant to be the ‘African COP’ where Loss and Damage was the un-ignorable issue, and years of pressure from vulnerable countries and activists have moved us closer to where we need to be. But we will not have justice until money starts to flow to vulnerable communities, so there is much work still to do.”

Coming into the conference, the United Nations Environment Programme released an analysis report highlighting that the amount of adaptation finance flowing to developing countries is currently five to ten times lower than what is needed, and though discussions on the Global Goal on Adaptation received some attention, many experts believed it was not as much as it deserved.

COP27 essentially mirrors the difficulty of coming to consensus during a polycrisis and under very different geopolitical situations. It is an outcome that is agreeable to all but also leaves everyone equally dissatisfied, with many negotiating groups announcing that the Sharm deal did not make progress, build on COP26‘s ambitions, or include language that would guide the world to peaking global emissions by 2025 while phasing down fossil fuels and coal.

“COP27 has done what no other COP has achieved and created a Loss and Damage fund to support the most impacted communities of climate change. However, on a global fossil fuel phase down, it’s sad to see countries just copying and pasting the outcome from last year’s COP26 in Glasgow. The science is clear, the impacts are getting worse and we know that renewables are the future. Polluting countries need to leave coal, oil and gas in the ground if we’re going to keep global heating from running out of control.”

With the global average temperature rise already at 1.1°C, the need to act in the face of the climate crisis has never been more blatant, because as Sherry Rehman, Pakistan's Minister of Climate Change put it, “Vulnerability shouldn’t be a death sentence.”