The age-old medicinal system is bound to disappear soon 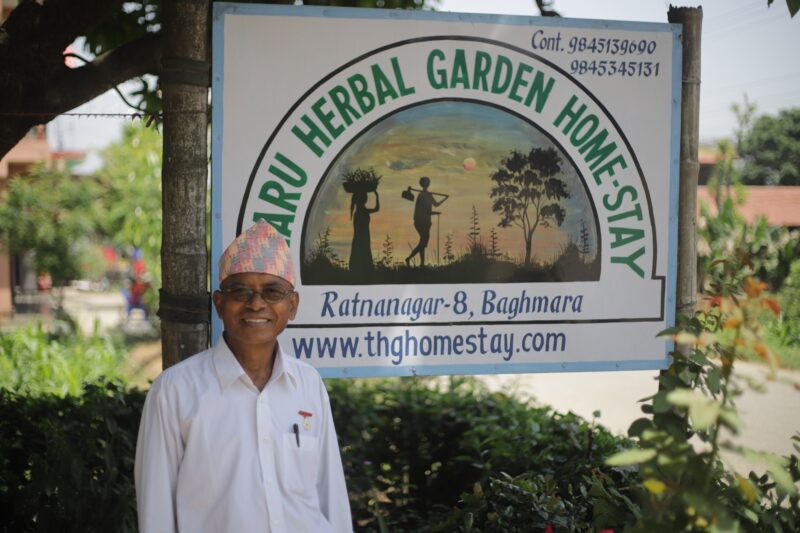 The bustling tourist town of Sauraha, around 180 kilometres from Nepal’s capital city Kathmandu, seldom rests. Nor do the streets. However, the streets of nearby Baghmara in Ratnanagar look deserted. Amidst the concrete houses in the neighbourhood, cropping up on both sides of the street, a one-storey house with a signboard and a herb garden in the front stands out.

Tharu Herbal Garden Homestay, as the board reads, boasts of a demonstration site with several herbs — both rare and omnipresent.

After working for Tiger Tops, an internationally recognized resort inside the Chitwan National Park, for more than 20 years as a nature guide, Ramdin Mahato from Baghmara turned into a traditional healer, gleaning the ethnobotanical knowledge from guruwas, the traditional Tharu healers from nearby districts.

“My great grandfather Mangar Mahato, grandfather Nathu Mahato and father Bighai Mahato — all of them were guruwas,” said Ramdin. “They also had a lot of knowledge about medicinal plants.”

He is proud of a notebook with neatly written natural prescriptions for ailments ranging from irritable bowel syndrome to sleep disorder and depression. Surprisingly, the diary mentions the names of plants not only in Tharu and Nepali languages but also in English, together with the scientific names.

The Tharu healers treat illnesses through their three-pronged medicine system — by using herbs and concoctions, chanting mantras together with administering herbal medicines, and massaging.

Called baidh or baidhwa in the Tharu language, the healers have been continuing the tradition, sourcing herbs from nearby forests and using the different parts of the plants to cure illnesses. Dhamis and guruwas — as healers are called in eastern, central and western Nepal respectively — likewise, use both herbs and mantras together to cure illnesses. Sohrainiya, mainly women masseurs who are also adept in midwifery, massage patients to cure illnesses.

However, the age-old medicinal system is bound to disappear. Only a few elder Tharus are continuing the tradition — with no interest from the young generation.

According to research by Pramila Gachhadar in eastern Nepal’s Morang, Sunsari and Saptari districts, the healers have been using around 136 different herbs, administering them as ash, paste, decoction, extract, heated shoot, juice, distilled liquid, powder, vapour, smoke, and oil and have even been using the raw plants, their pulp, resins, roots, and stems, apart from the fruits and flowers.

These plants are used to cure illnesses ranging from menstrual disorders to diabetes, not to mention common ailments like different body aches, fever, vomiting, nausea, dysentery, diarrhoea and skin diseases.

Deforestation has taken a toll on medicinal plants

However, these plants, once found in abundance, are now scarce and rare due to overgrazing, land degradation, habitat destruction, commercial harvesting and deforestation, to name a few of the factors involved.

Achhai Chaudhary, a dhami from Saptari District which is around 300 kilometres east of Kathmandu, said that most of the medicinal plants he uses are found in the farmlands and nearby jungle. 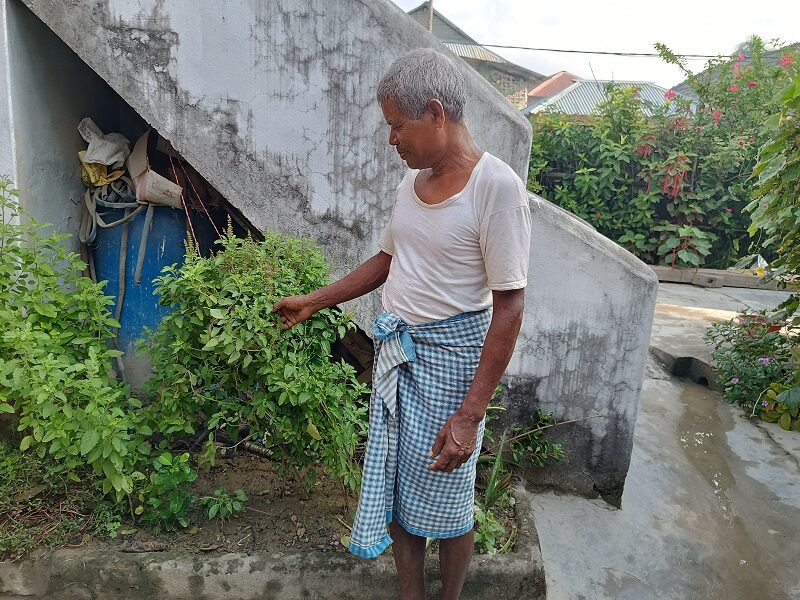 “Resembling tulsi, the common basil, it is a very useful herb,” said Achhai. “Soak the leaves and parts of this herb overnight and drink the water in the morning, it will keep your diabetes at bay. We call it Jethmal in the Tharu language.”

Among the medicinal plants in his backyard, a regularly used herb is locally known for its bitterness. Called “kalpnath” in Nepal’s southern plains, also known as “kalmegh” or green chiretta (Andrographis paniculata), it is used to cure fever and boost immunity. Recently, it was approved by the Thai government to be used in the cure of early stages of COVID-19.

According to Achhai, some of the rare species are found only in the core jungle area, almost after three hours walk from the East-West Highway, which has shifted northwards due to deforestation. Illegal harvesting has also played a key role in the vanishing of plants.

The boundaries created by protected areas

Likewise, Ramdin isn’t aware of any medicinal plants vanishing due to the changing landscape and climate. However, some of the herbs are found in the core area of the Chitwan National Park which was accessible to the locals when the national park wasn’t formed.

Tharus inhabited the land by clearing the forests in Chitwan. The whole area was covered by forests and medicinal plants were found everywhere. Now, most of the forest has been cleared. And even the omnipresent medicinal plants have vanished.

Buddhiram Mahato, an octogenarian guruwa from Chitwan, reminisced about how he would get inside the park without any objection. They would go inside the core jungle area to graze their cattle and while returning collect fodder and precious life-saving herbs. One thing they made sure of was harvesting the herbs sustainably so that there would never be a dearth of medicinal plants.

Ramdin agreed but lamented the difficulty of access. “We still have medicinal plants in the jungle, but we need permission these days. Earlier, we could get to the forest and harvest medicinal plants. We didn’t need any permission.” 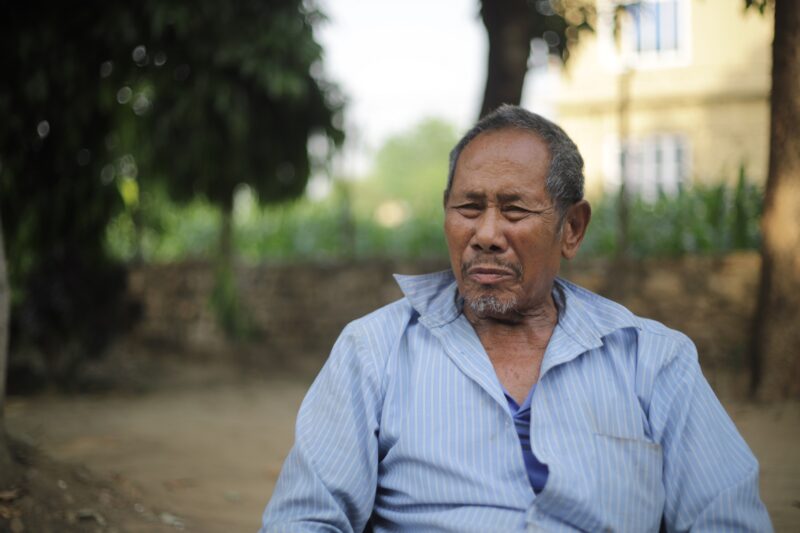 However, medicinal plants can be collected from the forests after taking permission. “A list of herbs/medicinal plants can be collected from national forests and community forests on a sustainable basis by paying royalties after taking permission from division forest offices,” said Anand Chaudhary, Assistant Forest Officer with Division Forest Office, Dhankuta.

As per the Acts and Regulations 2079, Ministry of Forest and Environment, the rate is as low as NPR 2 (less than one US cent) per kilo for Hedychium spicatum, Dryoathyrium boryanum to NPR 500 (USD 3.77) per piece for Dachtylorhiza hatagirea (paanch aunle).

As per the United Nations, International Trade Statistics Database, Nepal exported more than 10,000 tons of primarily medicinal plants worth around USD 60,000,000 in 2014, destined for more than 50 countries. 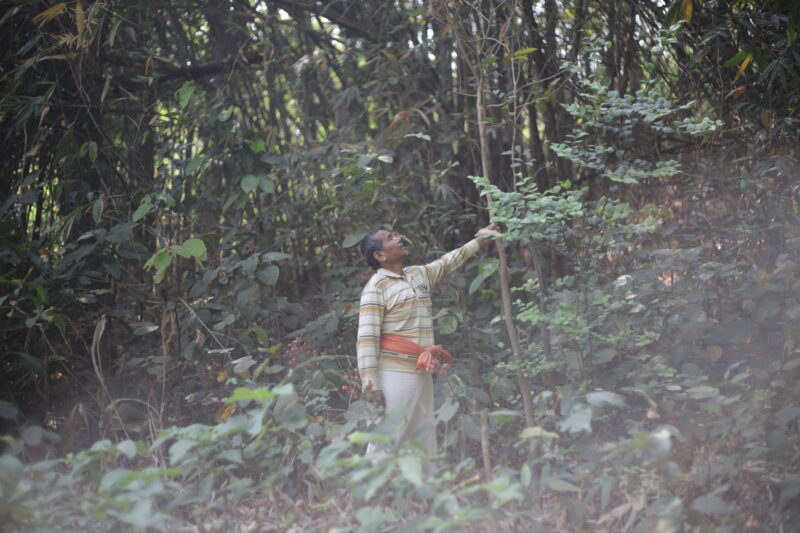 Devi Singh Chaudhary from Nepal’s Dang District has his own little forest of herbs and medicinal plants. Photo by Gaurav Dhwaj Khadka. Used with permission.

Devi Singh Chaudhary is in his seventies but he looks as if he is in his mid-fifties. He lives in an ashram in Junglekuti, literally a hut in the jungle, that has now turned into a sacred place. Around 15 kilometres from the East-West Highway in Lamahi area of Dang District which is around 400 kilometres west of Kathmandu, Junglekuti was founded by a sage, Siddha Baghnath Baba, around 200 years ago. He planted trees around his ashram, a quiet place for meditation.

Upon request, Devi Singh will show visitors all the medicinal plants, including some rare ones, surrounding the ashram and describe their specific uses. He said people come to Junglekuti and ask for medicinal help only after they are sure that allopathic medicines wouldn’t be able to cure their ailments.

Even some doctors practising allopathy have been integrating herbs into their treatment.

“To understand the principles behind Ayurveda, the oldest methodology of healing, I read The Ayurveda Encyclopedia that helped me understand the benefits of different herbal medicines such as Shilajeet, Triphala Churna, Ashwagandha and many more,” said Dr. Ishan Adhikari, a US-returned clinical neurologist and neurophysiologist.

“I use them on neurodegenerative disorders with marked improvement in their symptoms where allopathic medications have not achieved optimal results. Integrating allopathy with Ayurveda has shown promising results in many fields and I will continue to integrate them.”

Need to document the oral knowledge of healing

Devi Singh’s ashram is also a learning centre for traditional healers from across the country and neighbouring districts of India.

“Many people visit the ashram to learn about the medicinal plants and their uses,” said Devi Singh. “But I haven’t noted down the knowledge. It’s all in my head — whatever I learnt from my guru, the teacher and predecessor who looked after the place.”

However, Ramdin’s notebook, which he has been maintaining since 1994, can prove a game-changer in documenting the herbs and their usage.

“If we don’t share this knowledge with others, it will be lost forever,” Ramdin said, beaming.

The story was funded by Earth Journalism Network’s Indigenous Story Grants for 2022.