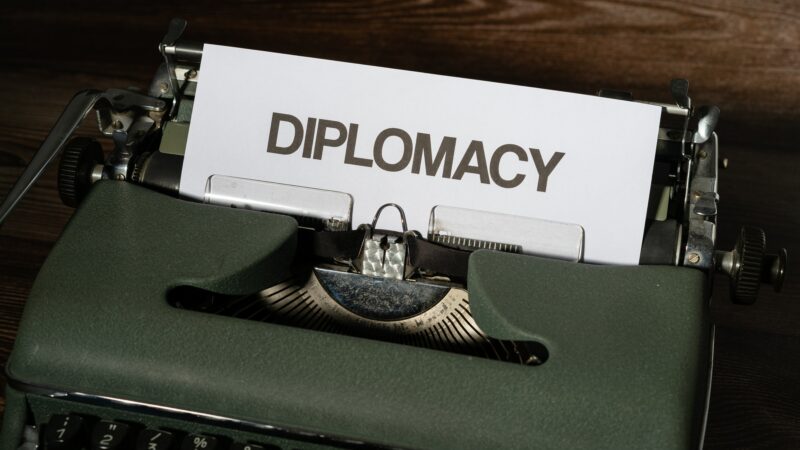 Image by Markus Winkler. Free to use under Unsplash License.

It is a new era in relations between Turkey and some of its once-upon-a-time foes. Most recently, it was the infamous handshake between President Erdoğan and Egypt's Abdel Fattah el-Sisi during the opening of the 2022 FIFA World Cup in Qatar on November 20.

Relations between Egypt and Turkey soured after former president Mohammed Morsi was ousted in a military-backed uprising in 2013. Morsi was a leader of the Muslim Brotherhood, which had ties with the ruling Turkish Justice and Development Party (AKP). The two countries are also on opposite ends in Libya, where Egypt has aligned with the eastern parliament in Tobruk while Turkey supports the Tripoli-based government, according to Al-Monitor. So it was not surprising that, for some observers, the photo-op did not carry much weight. In an interview with Al-Monitor, Turkey's former ambassador to Cairo, Safak Gokturk, said, “The photo of the two presidents shaking hands is high in news value but low in consequential value.”

Similarly, speaking to Al-Monitor, Sinan Ulgen, chairman of the Istanbul-based Center for Economic and Foreign Policy Studies (EDAM) and a former diplomat, said a handshake was simply not enough to overcome “the erosion of trust between the two countries,” which Ulgen described as far too great.

The photo-op also did not sit well with the opposition at home, who criticized Erdoğan's handshake in a series of tweets and statements.

With a tongue-in-cheek reference to a recent photo that both Cristiano Ronaldo and Lionel Messi shared on social media playing a game of chess together, a satirical magazine Leman, also put this image on their cover issue:

Writing on the potential meeting and describing it as the “diplomacy of intelligence,” journalist Abdulkadir Selvi said the meeting would likely take place under the auspices of Russian President Vladimir Putin ahead of Turkey's general election next year.

This change came shortly after Turkey launched its largest air campaign to date — operation “Claw-Sword” — against Syrian Kurdish groups following a blast in Istanbul on November 13 for which Ankara accused Kurdish militants, namely the Kurdistan Workers Party (PKK) and the Syrian People's Protection Units (YPG). Both groups denied any responsibility for the bombing, which killed six and wounded more than 80 civilians. In an interview with Al-Monitor, Mazlum Kobane (also known as Mazloum Abdi), the commander of the US-backed Syrian Democratic Forces (SDF), said their investigations pointed at the “Syrian opposition groups operating under Turkey's control” and that there were links to the Islamic State.

Meanwhile, the opposition Democratic People's Party (HDP), which the state accuses of collaborating with the PKK and is facing potential closure, condemned Operation Claw-Sword.

In a statement issued by the party's spokesperson, the political party implied that the government was using the bombing as a “pretext to legitimize and further its aggression against the Kurds in Syria” as well as boost the ruling party's image ahead of the general election next summer. Speaking to Al-Monitor, Mazlum Kobane agreed. “The truth is that there are two paths that lie before Erdoğan ahead of the elections. He can either reach an agreement with the Kurdish movement, and that would give him an edge in the elections, or ignite a war. They’ve chosen war. Erdogan has chosen war,” Kobane told Al-Monitor.

If there is one country enthusiastic about possible rapprochement between Erdoğan and Assad, it was Russia. Speaking at a press conference during the 19th meeting of the Astana format talks on Syria, Russian Special Presidential Envoy for Syria Alexander Lavrentyev said this decision was “vital” and “could help avoid deadly incidents involving civilians.”

“[Turkey and Syria] are neighbors and they should be friends,” Lavrentev reportedly said during the presser.

Fixing ties with Syria may have additional interests at stake for the ruling party and President Erdoğan. As authors Batu Coşkun and Gökhan Çınkara elaborate in this piece, the decision may be driven based on the domestic demands of AKP's traditional supporters, who have become increasingly resentful of migrants. “Erdoğan calculates that by striking an accord with Assad, he can initiate a process in which some of the four million Syrians living in Turkey return to Syria. Erdoğan is shifting in this direction as his traditional bases of support now demand that migrants leave the country, leaving Erdoğan and his party scrambling for a solution,” explain Coşkun and Çınkara.

This summer, in June, President Erdoğan also hosted Crown Prince Mohammed bin Salman of Saudi (MBS) Arabia in June. This was MBS's first visit to Turkey since the brutal killing of journalist Jamal Khashoggi in Istanbul in 2018. The ruling AKP leader put in the past the accusations leveled against the Saudi government in the aftermath of the killing. Months before MBS's visit, a court in Turkey said it was moving the trial of 26 suspects linked to the journalist's murder to Saudi Arabia. Following this decision, President Erdoğan traveled to Saudi Arabia, where he announced a “new era” in relations between Turkey and Saudi Arabia. According to the Washington Post, the mending of ties was “an effort to lure investment from oil-rich Saudi Arabia during a worsening economic crisis in Turkey that has been marked by skyrocketing inflation.”

According to former journalist Aslı Aydıntaşbaş, who is currently a researcher at the European Council on Foreign Relations think tank, President Erdoğan was “changing his agenda towards the Middle East, where, after the Arab Spring, Turkey's line was support for bottom-up change. That mission and that goal is now entirely abandoned, an admission on Turkey’s part of the longevity of Gulf monarchies and also a pragmatic decision to want to do business with them.”

The two leaders met again in November on the sidelines of the G20 Summit.

Finally, Turkey has also achieved significant strides in its ties with Israel. For the first time since 2008, an Israeli president — Isaac Herzog in this case — visited Ankara in March 2022. In August, the two countries announced the normalization of ties, including the return of ambassadors and consuls. Ankara did make its position on the Palestinian cause explicit, with Foreign Minister Mevlut Cavusoglu saying the thawing was not a sign that Turkey was “giving up on the Palestinian cause,” speaking to journalists in February 2022 ahead of Herzog's visit.

On November 17, President Erdoğan spoke on the phone with the designated Prime Minister Benjamin Netanyahu. The two last spoke in 2013 when Israel officially apologized to Turkey for raiding a Gaza-bound flotilla in 2010, which killed ten Turkish citizens. The relations between the two have fluctuated greatly since then.

In a congratulatory letter to Israel’s incoming prime minister Benjamin Netanyahu, President Erdoğan said, “I congratulate you on your victory in the elections and believe that the new government will continue cooperation between the (two) countries in all areas, in a way that will bring peace and stability to our region,” according to reporting by i24News, as per Netanyahu's office.

Similar to Aydıntaşbaş, columnist Ilham Uzgen in his recent piece for BirGun newspaper, analyzed the recent strides in foreign policy, concluding that, ahead of the general election next year, President Erdoğan is using whatever tools at his disposal to secure a potential victory. “Erdogan and his team know how to follow global and regional developments and trends, take positions accordingly, and adapt to changing conditions. In the process leading up to the elections, the tools at his disposal on the economic front are more limited than in foreign policy. That's why he focused on foreign policy and security with all his means, trying to consolidate his position from here,” wrote Uzgen.

Whether it's Ankara's ties with Washington DC and the EU, or Turkey's role in the Ukraine war, President Erdoğan is seemingly turning “these separate developments into his favor.” But the question remains whether the recent developments are guarantees for his power consolidation come election time.

There is another angle, which Steven A. Cook described in this opinion piece for Foreign Policy. “What I don’t buy is that this recent flurry of diplomacy heralds some new era of peace, love, and understanding in the Middle East. Rather, the various resets and outreach underway in the region are merely another means by which its leaders can pursue the same competition and conflicts of the past decade,” wrote Cook. Specifically on Turkey warming up to Egypt and Israel, Cook described the move as Turkey wanting “de-escalate in some places so it can escalate elsewhere.”

The local opposition has also been critical of President Erdoğan's recent diplomatic advancements. Over the summer, when Ankara and Tel Aviv were restoring diplomatic ties, the leader of the main opposition Republican People's Party (CHP), Kemal Kılıçdaroğlu tweeted:

I believe in Turkey which has a say in the region and ability to lead smart diplomacy (behind closed doors). But martyring [Turkish] citizens in international waters comes at a price. My message to Israel is that this issue is not closed for us yet.

Kılıçdaroğlu also had something to say about MBS's visit to Ankara:

I also have a few words to Bin Salman who is visiting us. Committing a murder on our soil comes at a price as well. We haven’t settled the score with him. He may be twisting Erdoğan around his little finger, but Turkey is a great state and he’ll be made to pay the price for what he did.