'Our house is flooded out, our community too ...' 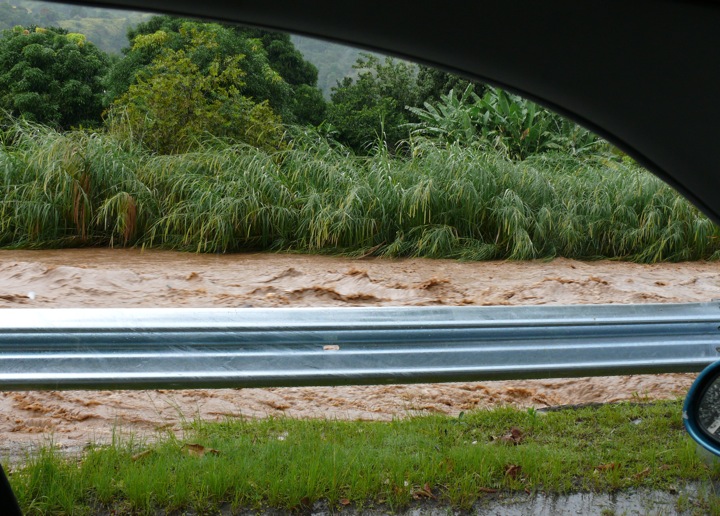 The Diego Martin River almost at capacity back in 2006. Flooding in all parts of Trinidad has progressively worsened over the years, with the damage caused by a low-level trough in November 2022 ranking as some of the worst the country has seen. Photo by Georgia Popplewell on Flickr, CC BY-NC-ND 2.0.

It is the last day of November and the weather forecast in Trinidad and Tobago reads, “Mostly sunny conditions […] apart from a few showery interruptions [with a low] chance of isolated afternoon heavy showers or thunderstorms.” Yet, much of the country is still grappling with the effects of the low-level trough that prompted the issuance of a “weather emergency alert” on November 26. Steady rains have caused rivers across the island of Trinidad, especially, to reach their limit and overflow, bringing major flooding to plains and other low-lying areas.

An Orange Level Riverine Flood Alert remains in effect for the larger of the two islands until midnight on November 30, with the country's Meteorological Office advising:

Some river levels across Trinidad are on a very slow decline with others remaining near full capacity. Runoff is slow due to saturated soils and any additional rainfall will cause further delay. Some impacted communities are still at moderate to high risk of adverse impact. Water levels are expected to slowly but persistently decrease in most areas. Note, though, that run off will also be slower at high tide.

Trinidad won't even have time to issue a red riverine flood alert at this rate. By then we'll all be under water

Other social media users, astounded at how widespread the effects from the adverse weather were, posted images and videos of the wreckage, from landslides and flood waters to destroyed roads and overturned vehicles:

My dad just called me to tell me what 2 weeks of rain have done to my beautiful Trinidad & Tobago😖 Roads destroyed, landslides, mudslides, floods, etc… #ClimateCrisis

Flood waters reaching as high as 10 feet (3 metres) were proving challenging for disaster relief crews trying to reach those affected, and in the hardest hit areas, like Mafeking, in the south-eastern town of Mayaro, situated just south of the Nariva Swamp, officers from the Trinidad and Tobago Coast Guard and Defence Force called in boats and heavy-duty trucks:

Today, the ODPM arranged the deployment of a troop carrier to Mafeking to assist T&TEC personnel restore electricity in flood inundated areas. There was also the redeployment of two (2) dinghies with operators of the TTCG to Bamboo Settlement #2.#ODPMTT #AllOfSocietyApproach pic.twitter.com/R5TOn7VVox

Many families were displaced from their homes, with some wooden structures reportedly collapsing under assault from flood waters and waterlogged, shifting land:

While the Ministry of Social Development and Family Services pledged to provide food, financial assistance and psychological support to flood victims dispersed across as many as 67 communities throughout the country, many Twitter users were wondering how the problem was going to be solved:

Soooo what's going to be done to mitigate the effects of flooding in Trinidad and Tobago?
Every single time lil bit of rain fall the whole place flood

It's actually quite concerning how quickly Trinidad floods

Support for flood victims has also been organised through local Chambers of Commerce and other business associations. Clean-up efforts will become more robust as flood waters subside, with Minister of Rural Development and Local Government Faris Al-Rawi stressing that government services must continue, requiring a full workforce.

However, to some Twitter users, this seemed like a Catch-22, as commuters were forced to battle intense traffic congestion as a result of the flooding:

How many managers said “We understand that the floods are still present and still pose a threat. Therefore I recommend we work from home until the rivers reach their normal levels” Because looking at the traffic from this evening it’s seems very unlikely #trinidad #flooding

Many roads were also impassable due to the level of flooding.

Minister Al-Rawi also emphasised that human activities also contribute to flooding, suggesting there has to be some measure of accountability:

When people wilfully build and intrude on waterways and water courses or they think it's okay to throw a fridge into a waterway, these [have] consequences.

Littering and poor development practices have long been cited as contributing factors to the country's flooding woes.

This Twitter user was all for getting to the source of the problem:

Trinidad Parliament needs to focus on the real issue, year after year, flood after flood, seems like a weekly occurrence now.https://t.co/EUHGVQGReV

The office of Disaster Preparedness and Management, meanwhile, was carrying out aerial reconnaissance to help inform a flood relief strategy at the local government level:

Today, the ODPM collaborated with the TT Air Guard to conduct aerial reconnaissance of flood impacted areas, which will be used to assist the MRDLG's flood response strategy.https://t.co/BIwVwGyYfJ#ODPMTT #AllOfSocietyApproach pic.twitter.com/shw2BfPsDK

While schools country-wide were closed as a precaution on Monday, November 28, some schools were forced to keep their doors closed up to Wednesday because their compounds were so badly affected. Citizens were also cautioned about the possibility of dangerous infections like leptospirosis being transmitted via contaminated flood waters. At the same time, conservationists pleaded with residents not to kill wildlife displaced by flood waters.

The Barbados-based Caribbean Institute for Meteorology and Hydrology (CIMH) has cautioned that the heavy rains which caused the flooding could continue into December, posing further risk to the region as a whole.