The current bottom up mobilization is the largest since 1989 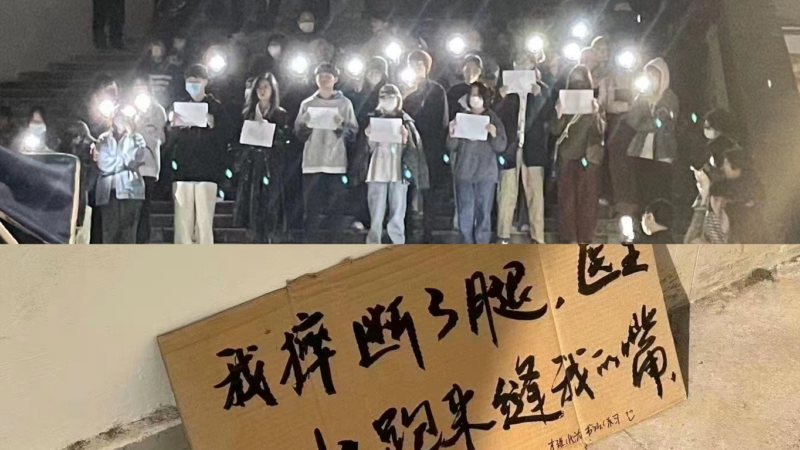 Viral photos showing the protests at the Communication University in Nanjing. The protest slogan: “I broke my leg, the doctor came and sealed my mouth.”

The building tensions around China’s strict zero-COVID policy have finally exploded, with protests breaking out in major cities all across the country. Protestors are demanding significant political change — in Shanghai, crowds chanted “down with Xi Jinping,” the country’s president who insisted on maintaining the zero-COVID rules for the last three years; in Beijing, journalism students called for freedom of the press.

Given the extremely strict political control, the heavy presence of surveillance technology on the streets, and the censorship of critical voices on all online platforms and social media, mass protests are rarely seen in mainland China in recent years.  While people are fully aware that the authoritative police state has the capability to track and arrest them, they have overcome their fear and stepped out. The current nationwide and bottom-up mobilization has become the largest in scale since the 1989 pro-democracy protests, which resulted in infamous bloodshed and crackdowns against activists and students.

“I am the victim trapped in the fire.”

The national protests emerged spontaneously after a fire broke out in a residential building under COVID-19 lockdown in Urumqi on November 24, 2022, killing at least ten people. The fire was caused by sparks from a power strip in a bedroom on the 15th floor of the building. Yet, it took three hours for the firefighters to put out the fire as the COVID-quarantine enforcement team had previously blocked the entrance of the residential campus with an iron gate.

The next day, state-run media reported that the residential campus was not under lockdown when the fire broke out and claimed that the major cause of the deaths was due to the lack of “self-rescue capability.” But victims of the fire said that the entrance of the building was locked from the outside, and they had to leave the building via an apartment on the first floor.

Angry crowds in Urumqi responded to the misinformation with a protest outside the city government building, demanding an end to the more than 100 days of COVID lockdown. The city government pacified the fury with the promise of gradually opening up low-risk areas.

Video reportedly showing citizens in #Xinjiang’s Urumqi protesting in front of a government building. Some could be heard chanting “let’s die together.” The authenticity of the video can’t be independently verified atm, but there have been several other videos … https://t.co/Dgw2P5AA1h

Urumqi is not the only city affected by the zero-COVID rules. After the Urumqi fire, China's social pressure cooker exploded, as indicated in the following viral expression that has driven people to the streets:

I am inside the crashed bus [27 people were killed in a bus crash in Guizhou on September 18, 2022 when transferring people to the quarantine center late at night]; I am the patient who was denied treatment; I am the worker who walked for more than a hundred kilometres [On October 29, thousands of Foxconn workers walked for vast distances to escape campus quarantine]; I am the one who jumped from the highrise [there have been many suicides related to COVID lockdowns]; I am the victim trapped in the fire. If I am not there yet, I will be the next one.

Public outrage drove people to the streets to commemorate the victims. A major demonstration took place on Shanghai city's “Urumqi Road.” Protesters were holding white sheets of paper to symbolize censorship, and singing the national anthem, which begins with the lyrics: “Stand up! Those who refuse to be slaves!” In one spot, protesters were chanting political slogans, “Down with the Chinese Communist Party! Down with Xi Jinping!”

‘Down with the party! Down with Xi Jinping!’ Free Xinjiang!’ pic.twitter.com/q5jwUQrz5Z

People’s frustration has been building for months. Since the outbreak of Omicron variants early this year, China has suffered from a severe economic downturn with a shrinking commodity market and a slumping property market.

Prior to the Congress of the Communist Party of China, a rare protest at the Sitong Bridge in Beijing on October 13 against Xi Jinping and his policies served as an important sign of people’s discontent. People expected the government to loosen the COVID-control measures and rescue the economy. Yet, amid a surge of COVID cases in recent weeks, Beijing decided to beef up its fight with new lockdowns and mass testing.

But people aren't standing for it this time. There have been more and more violent confrontations between quarantine enforcement workers and residents since early November. Guangzhou is a major conflict zone:

After three years of living under the so-called dynamic lockdown, people have lost their confidence in Beijing’s zero-COVID battle. Coincidentally, the ongoing Chinese state propaganda about the failure of Western countries to protect their people and letting them die was debunked by the live-streaming of the World Cup matches:

Imagine living in locked down China, sealed in your tiny apartment, watching the World Cup, and then you realize not a single person in Qatar is wearing a mask.

Once again, China has been left behind in history, trapped in the past. pic.twitter.com/0HmSe9jcJh

Again, Beijing responded to people’s anger with censorship. China Central Television blurred and cut out the shots of the unmasked faces of the football fans in its live-streaming.

However, people’s suffering is real and cannot be so easily obscured. In some regions, including Urumqi, people have been locked up for months, some without any income.

Protests relayed across the country

Protests spread like wildfires in the days following the fire.

After a very long night on Saturday where protests erupted from Urumqi to Shanghai, the biggest next update today is the thousands-strong rally at Beijing’s Tsinghua University—one of China’s elite institutions—earlier today on Sunday. https://t.co/zuJId6cD6A

At night, more protests emerged across various districts in Beijing under the protest slogan “beyond zero-COVID”:

Many Chinese journos at this moment were in tears watching the video. It’s happening. Still in Liang Ma He 亮马河 area. A girl shows “Give movies back, we want cinema freedom. We want free expression. give media back, give us journalism back”. Ppl echoed. It’s going unstoppable. pic.twitter.com/76OjQCoISN

Similar protests could be seen all across the country. The majority took place at night peacefully. Guangzhou protesters sang a popular Canton pop to express their love for freedom:

Protesters from Chengdu, Sichuan province, called an end to COVID tests and lockdowns:

The scale of protests in Wuhan, where COVID was first detected in March 2020, was one of the biggest:

Waves of protests also broke out inside the university campus, where student-protesters have been vocally demanding liberal political changes. Students from the Communication University of China from Nanjing wanted  freedom of expression:

Amazing photos coming from the Communication University of China, Nanjing, where students are protesting, making their voices heard at a time of growing unrest in light of zero Covid, following the Urumqi fire. pic.twitter.com/uFp7ZeboQL

Southwest Jiaotong University from Chengdu called for democracy and the rule of law:

Protest posters and flash mobs were numerous. Here is one from Dali, Yunnan