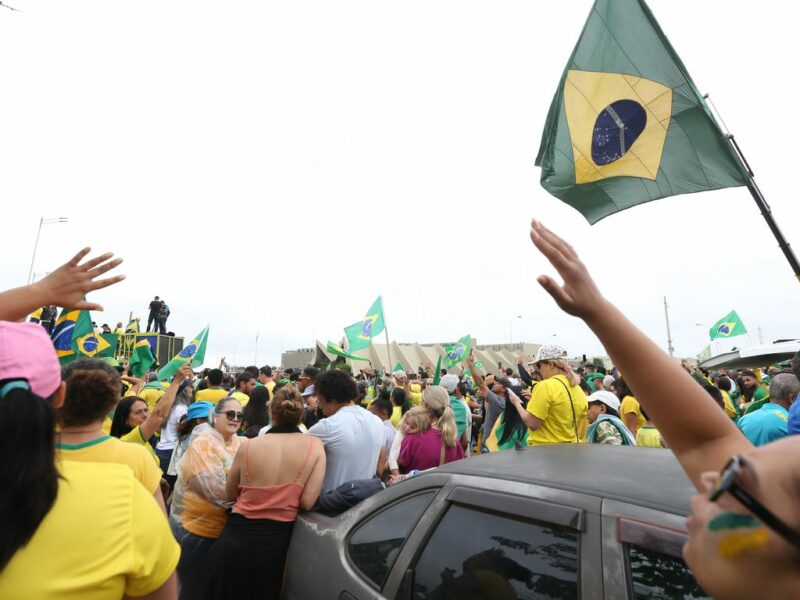 Bolsonaristas protest in front of the Army headquarters in Brasília, in November 2 | Photo: Valter Campanato/Agência Brasil

A video recorded in Porto Alegre, Rio Grande do Sul, the southernmost state of Brazil, shows a woman on her knees crying while people around her hug each other and celebrate, some wrapped in Brazil's national flag.

The reason for the celebration was the breaking news someone in the crowd had received on their cell phone: Supreme Court justice and Brazilian Electoral Court (TSE) president Alexandre de Moraes had just been arrested.

The video was recorded on November 1, two days after the election result confirmed leftist Luiz Inácio Lula da Silva as the next president of Brazil, in a verified free and fair electoral process. For far-right incumbent Jair Bolsonaro supporters, it meant they could challenge the election and potentially see their candidate as the victor. But it was all a lie.

Since the night of October 30, when Lula's victory was announced, Bolsonaristas have camped out in public spaces, blocked highways, and protested in front of military units throughout the country, stopping supplies transportation in some places, claiming they wanted “to save Brazil,” and demanding Lula — a president elected by over 60 million citizens — not be sworn in in January.

Almost a month after the run-off, these antidemocratic acts continue. An armed forces report on the ballots affirmed it couldn't identify fraud or inconsistencies in the process, but since the document was fairly ambiguous, it helped to feed mistrust in the electoral system.

Adding to the chaos, Bolsonaro and his party, PL (Liberal Party), submitted a request to the Electoral Court to consider annulling votes cast in ballots created before 2020, claiming the equipment used to make them then couldn't be properly audited, which experts say is untrue, according to news broadcast Jornal Nacional.

The models appointed in the request represent around 60 percent of the ballots used. PL's request, a party that elected the largest bench for the House in 2023 in the first round, mentions only the run-off. Justice Alexandre de Moraes declined the request and gave the party a BRL 22.9 million fine (around USD 4.2 million) for “bad faith with the process.”

In the past month, the green-and-yellow-clad protesters (the colors of Brazil's flag) have been filmed asking for military intervention, quoting wrongful interpretations of the federal Constitution, celebrating fake news, and claiming they will not accept “communism” in the country.

The latest video to go viral shows a group of them attempting to sign SOS holding their cell phone lights over their heads, while in some states, there are reports of violence escalating.

Alexandre de Moraes, who became a foe to Bolsonaro and his followers ever since he launched an investigation on fake news structures, with measures affecting some of the president's allies, ordered the Highway Federal Patrol (PRF) to remove people blocking the roads.

But some videos being published on social media since the first night of protests raised questions about whether officers are favoring protesters.

In one of them, a PRF officer begs Bolsonaro “to stop being irresponsible” and to ask people to leave the roads while his colleague explains to protesters they are going to be fined. The protesters answer back that officers who were there earlier said they could stay.

PRF is a force that gained power under the current government, as reported by piauí magazine. On election day, October 30, there were reports in several states — especially in areas where Lula was a favorite — of police stopping and searching people who were traveling to vote, delaying them in the process. A Brazilian Report story by Amanda Audi shows that PRF recruited 37 percent fewer officers to deal with the blockades than to work on election day.

Bolsonaro refused to speak publicly until over 40 hours after the election results were publicized, and even then failed to mention Lula's name or his own defeat. On November 1, he praised the protests, saying they were “fruit of indignation and injustice on how the electoral process took place,” but claimed, “their methods couldn't be the same used by the left” and asked his supporters to preserve others’ right to come and go.

The following day, with reports of financial losses, he published a new video, saying he was “upset and sad” just as his voters, repeated that protests were welcomed and part of the democratic game, but asked again for the clearance of roads.

I want to make an appeal to you, clear the highways. This is not part, as I understand it, of these legit protests. Let's not lose our legitimacy. Other protests you are holding all over Brazil, in squares, feel free [to continue]. And I make it clear, you are protesting spontaneously.

(…) Do protest, in other ways, other places, because this is very much welcomed, it's part of our democracy.

His supporters started to lean into conspiracy theories after both statements, suggesting he sent cryptic messages through the videos and encouraged them to carry on. Folha de S. Paulo newspaper reported that Bolsonaro wanted to back the protests but was worried about the legal implications.

While Bolsonaro and his family have mostly remained silent since the election defeat, senator Flávio Bolsonaro, one of his sons, praised the protests on social media on November 2:

A standing ovation to all those Brazilians who are in the streets protesting, spontaneously, against the moral bankruptcy of our country!

Although he and his father stressed the term “spontaneously,” there are ongoing investigations to track those suspected of financing the antidemocratic acts.

On November 17, Justice Moraes ordered the blocking of banking accounts related to ten people and 33 companies. As reported by the news outlet UOL, people who participate in the acts may answer for crimes under Brazilian law.

According to Agência Publica, a Global Voices’ partner, Steve Bannon, a former US President Donald Trump's former advisor who is close to the Bolsonaros, launched the term “Brazilian spring” to describe the protests at the beginning of the month. In some protests, demonstrators waved posters with the hashtags #BrazilWasStolen and #StopTheSteal.

Publica also reports that Facebook and Instagram have been running ads that promote the antidemocratic acts and advocate for a coup to stop Lula's inauguration. Although ads propagating misinformation are against Meta policies, Publica points out that only four out of 65 ads analyzed were removed.

In the days following the run-off conclusion, literature professor João Cezar de Castro Rocha, who studies the far-right in Brazil, has been calling attention to the cognitive dissonance taking over Bolsonaristas. He tweeted:

The antidemocratic putschists protests are funded and tend to become more and more violent, since the everlasting frustation over the 72-hours [a deadline that has been repetead by protesters] continues. Bolsonarism had converted into a fundamentalist cult and is now becoming an example of domestic terrorism. Criminal organization!

Bolsonaro returned to work in the Planalto Palace, where the presidential office is, this November 23, after 20 days of absence.

His first public agenda after losing the elections was confirmed for this November 26: a ceremony at the Aman (Black Needles Academy, the main Army school of formation), which is currently surrounded by his followers, as reported by UOL.