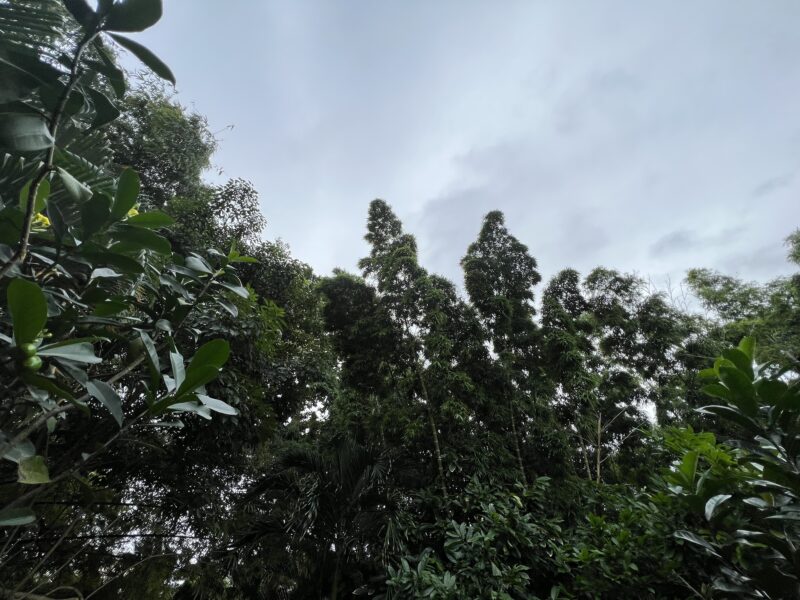 Overcast skies in Trinidad and Tobago on the afternoon of November 26, 2022, as the country experienced a weather system that produced high levels of rainfall and consequent flooding. Photo used with permission.

Following a yellow level Adverse Weather Alert from the country's Meterological Office, Trinidad and Tobago was put under a national emergency weather warning on November 26. In the context of “further incoming heavy rainfall over the next two days,” the Office of the Prime Minister posted the announcement on its Facebook page, citing “excessively heavy rains” and water courses “at or […] close to capacity”:

Already there is significant damage to our road infrastructure in very many parts of the country. We are anticipating increased flooding and landslides in susceptible areas.

Prime Minister Keith Rowley encouraged citizens to stay indoors if possible, and reassured the public that the relevant state agencies were mobilised to assist in what he termed “very threatening circumstances.”

The wet season, which typically runs from June to December, has been a particularly active one this year. By mid-morning on November 26, several rivers across the country were at dangerously high levels:

Reported River Levels based on eye-witness reports across Trinidad.

Multiple rivers are at capacity with flooding ongoing. While there are no Riverine Flood Alerts/Watches/Warnings from the TTMS, don’t wait on one to prepare! https://t.co/3U4GeqbIBm pic.twitter.com/hy9CdnUXKF

Images and videos of widespread flooding, as well as warnings about potentially dangerous areas, were soon being shared on social media channels like WhatsApp, Facebook and Twitter:

Mayaro /Guayaguayare is officially blocked off from the rest of Trinidad

Just the day before, the Manzanilla Stretch, which runs parallel to the Atlantic Ocean on the eastern coast of Trinidad, was blocked off to vehicular traffic following flooding that caused parts of the road to cave in. Video of the scene was shared widely on WhatsApp:

10 AM – Over the last 10 hours, persisting rainfall has triggered significant flooding and landslides mainly across Trinidad.

Rains are forecast to continue today and tomorrow, with additional flooding likely.

Significant flooding at Mamoral, interior Central Trinidad as the Caparo River and its tributaries overtop.https://t.co/3U4GeqbIBm pic.twitter.com/iKm2AoGAbk

In addition to flooding, other areas were experiencing landslips and felled trees:

Prime Minister Dr Keith Rowley has given assurances that all relevant authorities have been mobilised and are working to deal with the flooding and landslides fallout of the current cycle of adverse weather affecting Trinidad and Tobago.

Just after midday, the Meterological Office had added a yellow-level Riverine Flood Alert to its existing yellow-level weather alert; by early afternoon, it was being reported that key routes were under water:

The last available North-South route along Eastern Trinidad, the Cunapo Southern Main Road, is being flooded.

Once this route becomes impassable as floodwaters rise, all North-South routes in eastern Trinidad would become inaccessible. https://t.co/3U4GeqbIBm pic.twitter.com/M13BXEUeBd

Many roadways across the country had already been rendered impassable earlier in the day.

A low-level trough is passing Trinidad and Tobago […] and, at this time, we continue to have the low-level moisture convergence associated with it. There is also some support in the mid to upper levels of the atmosphere for the development of deep convective activity, which can produce heavy showers and thunderstorms over some areas.

Aerial footage of some of the flooding gave some idea of its scope. One video of the St. Joseph river overtopping showed a lot of garbage — much of it discarded plastic bottles — trapped against a bridge as the water rushed on. Littering is a phenomenon that is a major contributor to the country's flooding problems. The fact that so much of the trash consists of single-use plastics also raises concerns about public awareness of the climate crisis, especially since Trinidad and Tobago is a signatory to several Multilateral Environmental Agreements (MEAs) on climate change.

The Adverse Weather Alert will stay in effect until 8:00 p.m. on November 26, even though rain is expected to continue for a few days.