Kosovo thanks the US; Serbia has its own interpretation 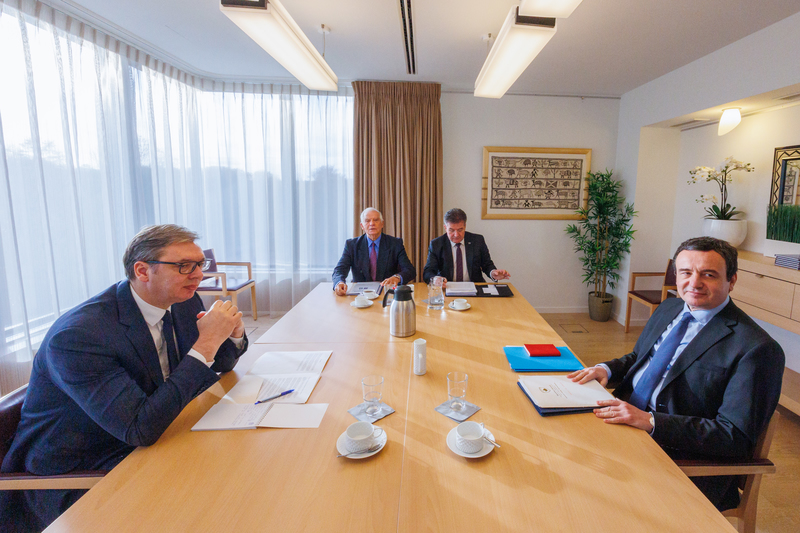 Meeting in Brussels on November 21, from left to right Aleksandar Vučić (President of Serbia), Josep Borrell Fontelles (High Representative of the EU for Foreign Affairs and Security Policy), Miroslav Lajčak (EU Special representative for the Dialogue and other Western Balkan regional issues, Slovakia), Albin Kurti (Prime Minister of Kosovo). Photo by the Council of the EU Newsroom, republished with permission.

Two days after Kosovo and Serbia failed to reach an agreement on the row centering on a decision made by the Kosovo government to ban Serbian-issued license plates after a long dispute, the EU announced on November 23, that the issue is now resolved.

We have a deal!

Very pleased to announce that Chief Negotiators of #Kosovo & #Serbia under EU-facilitation have agreed on measures to avoid further escalation and to fully concentrate on the proposal on normalisation of their relations.

Borrell said that Kosovo will end further actions related to the re-registration of cars; meanwhile Serbia will no longer issue car license plates with the names of Kosovo cities.

The government in Pristina argues that license plates predating the Kosovo's 1999 war for independence from Serbia can no longer be valid. It says the 50,000 Serbs in northern Kosovo, who only accept local Serb institutions, must now use Kosovo plates.

The license plate issue has been a source of contention for some time, with local Serbs in Kosovo preferring to use plates issued by Belgrade that Kosovo considers illegal. The row sparked repeated flare-ups over the summer.

The EU in August brokered a deal to allow free movement between Kosovo and Serbia, seeking to ease tensions after a series of violent incidents. But the situation deteriorated. Earlier this month Kosovo Serbs resigned from their positions as MPs, mayors, judicial officials and police officers in a coordinated protest against alleged breaches of agreements made between Serbia and Kosovo in Brussels.

Kosovo thanks the US for the intervention

Kosovo's Prime Minister Albin Kurti announced a delay on the implementation of the fines after the failure to reach an agreement on Monday, because the US asked for it. The US intervention pushed Kosovo and Serbia to find  common language on the car license plate issue. Here's what Kosovo's prime minister and president had to say:

No time for small ambitions, it’s time for big steps. Yesterday's accordance paves the way for intensive talks on the full normalization of relations w/ Serbia based on the EU's Proposal supported by 🇫🇷, 🇩🇪&🇺🇸. Thankful to @USAmbKosovo Hovenier for his role, support & dedication.

I want to thank @USAmbKosovo Jeff Hovenier and the U.S. Government for their active engagement in reaching today’s deal in Brussels. Their support for the dialog process b/w Kosovo & Serbia is indispensable. 🇽🇰 is grateful.

Washington was quick to welcome the deal:

The United States welcomes the agreements reached between Kosovo and Serbia to avoid further escalation of tensions and to concentrate fully and urgently on normalizing relations under the auspices of the EU-facilitated dialogue. https://t.co/MoQGmRAxlL

But Serbia chose another interpretation of the Brussels deal with Kosovo.

The Serbian President Aleksandar Vučić said existing “KM” number plates issued for Kosovo Serbs in the northern town of Mitrovica, and used throughout Serb-majority northern Kosovo, will remain in use despite the agreement, according to BIRN.

Kosovo and Serbia started negotiations for the normalization of relations in 2011, with the mediation of the European Union. The negotiation process is expected to end with legally binding agreements. Although Kosovo declares that this agreement should include mutual recognition, Serbia does not accept, insisting on a “compromise solution.”

During the second half of 2022, the license plate dispute has been used as the most visible issue by various political actors, as well as propaganda and disinformation purveyors within the Western Balkans region and beyond.

For instance, ahead of July 31, the original deadline set by Kosovo for replacement of the license plates, Serbia launched a campaign promoting  the false narrative that “Kosovo is preparing the expulsion of the Serbs from the country, just as Ukraine expelled the Russians from the eastern regions of its territory.” The joint regional analysis noted that besides  the replacement of the license plates, “Belgrade misinformed that according to the decision of Prime Minister Albin Kurti, the identity cards of Serbs would be confiscated at the border, an action which would precede the final expulsion of Serbs from Kosovo.”

As a result, dozens of Serbian citizens with heavy vehicles blocked the roads leading to the border points in Jarinje and Bërnjak. But according to the decision of the government, those who have Serbian identification documents would only have one document issued to them at the border crossing points, a practice that Serbia applied with the citizens of Kosovo for more than a decade.

Politicians on both sides of the Kosovo–Serbia border exploited the resulting tensions to gain visibility by spreading fear of all out war. In August, Serbian pro-government tabloids raised the tensions  at regional level by claiming that a new armed conflict is imminent, with a continuous campaign of warmongering and race baiting. The campaign attempted to single out Prime Minister Kurti as the main culprit for the problems and key obstacle to finding  solutions.

Orhan Dragaš, the director of the International Security Institute based in Belgrade, noted that the explosion of disinformation from Russia-linked websites and social media accounts in Serbia, that claimed that fighting had broken out in Kosovo on August 1, “was an aggressive Russian hybrid operation designed to provoke another European war and deflect attention from Ukraine.”

In Kosovo, member of parliament from ruling Vetëvendosje party Artan Abrashi spread a debunked false claim that “after the mobilization in Russia, there is also mobilization in Serbia.” Abrashi's sensationalist allegations implying scheduled violence on September 24 were spread by number of Kosovo media outlets.

On September 26, a Serbian tabloid issued false claims of “illegal” “incursion” by the Kosovo Security Force against the ethnic Serbian population in North Kosovo municipality of Zubin Potok, near the  Serbian border, which provided excuse for inflammatory reactions from both the local Serb political party and by the Serbian government office for Kosovo. The next day, Serbian President Vučić threatened that, in case of pogrom against the Serbs in Kosovo, the Serbian military would intervene if  NATO forces stationed in Kosovo fail to protect them.

In an article for Euroactiv, Antoinette Nikolova, the Director of the Balkan Free Media Initiative, warned that all this warmongering disinformation and propaganda can trigger ethnic violence similar to the deadly unrest 18 years ago.

In Kosovo, such a threat carries particular weight. In 2004, Serbians were wrongly accused of drowning three ethnic Albanian children. A media storm ensued, leading to an outbreak of ethnic violence that left 19 people dead, and hundreds more injured. According to OSCE, ‘without the reckless and sensationalist reporting on 16 and 17 March, events could have taken a different turn.’