The Henan government helped recruit most of the workers 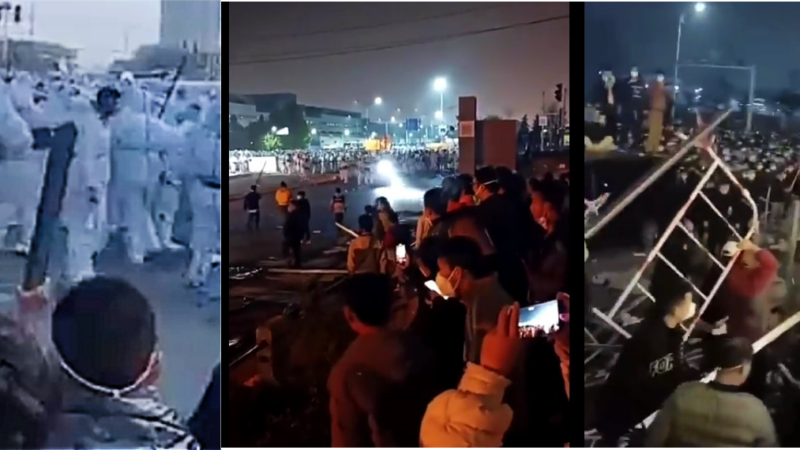 Violent protests broke out in Foxconn, a major Apple iPhone subcontractor in Zhengzhou province, China, as a reaction to the state's strict zero-COVID rules.

While the campus closed-loop management has undoubtedly added stress to the workers, the recent protests occurred against the backdrop of exploitative labor conditions, according to labor rights watchdog China Labour Bulletin’s (CLB) recent investigation.

After the mass exodus of Foxconn workers near the end of October, the factory attempted to keep the production line operating by increasing the daily overtime work bonus from RMB 100 (USD 14) to RMB 400 (USD 56) on November 1. One week later, Apple. Inc issued a statement admitting that the iPhone's production output had been affected by Foxconn workers’ exodus but stressed that it would ensure a normal output level.

To ensure the output, Foxconn needed more workers. The Henan government stepped in to offer help. By November 17, within two weeks, more than 100,000 new workers had been recruited. Yet, on November 23, after the new workers had finished their COVID quarantine and moved to the factory campus, violent protests broke out.

CLB has concluded that the violent protests had two trigger points. First, the COVID-free new workers found out that they had to live and work with workers who were COVID-positive. Secondly, the contracts that the new workers received were different from what they had been promised during recruitment.

According to a report from a mainland Chinese media outlet, Foxconn promised that the new workers would receive an RMB 3,000 (USD 420) bonus for regular attendance upon working for 30 days and another round after 60 days. After they moved into the campus, they were notified that they could only receive the bonus after working for three months.

The newcomers felt cheated and started protesting. Here is a video showing the protests on November 23:

The confrontation tonight is getting more and more intense…

The next day, Foxconn admitted that there was a technical error in the payouts for the newly hired. The company said it would fix the error, guaranteeing that the workers’ contracts would match their recruitment promises and committing to releasing an RMB 10,000 (USD 1,400) quarantine and healthcare subsidy for those who decided to leave the factory.

While the protests are over, the real issues have not been addressed.

Many workers voiced their discontent during the exodus in October about the closed-loop plant management, poor living conditions, and lack of healthcare support within the campus during last month's COVID outbreak.

Instead of addressing the workers’ concerns, the government's top priority was to continue the production of iPhones. To do so, the Henan government stepped in to help recruit new workers for Foxconn by mobilizing other provincial and local-level governments to help out.

Under pressure, some local authorities handed down a recruitment quota to meet the targets, and eventually, some civil servants and retired military personnel were mobilized to fill the quota.

The recruitment ads, however, were misleading. Below is a Foxconn job ad posted by a local party branch on Twitter. It said that the monthly salary was more than RMB 10,000 (USD 1,400) per month without specifying that a large part of the payroll comes from the overtime bonus system. @iamdoublelee mocked the ad:

Foxconn is recruiting workers all across Henan province. Government handed down to the communities. The business environment is so good in mainland China. Governments serve you so well. Don't run.

In another video, which claimed to be taken in Luyi county in Henan, a male voice claimed that he was recruiting for Foxconn with an RMB 1,000 (USD 140) daily salary. A woman asked if women could apply, and the man answered that even the homeless could join. The video was originally shared on Douyin, a popular Chinese video platform, and was reposted on Twitter by @Martin_122213:

The mass recruitment of more than 100,000 workers was finished within two weeks without proper interviews or onboarding, with many of them having no previous factory work experience.

As pointed out by a Chinese citizen news source @xinwendiaocha on Twitter, the composition of workers, to a certain extent, has contributed to the recent confrontations:

The reasons behind the Foxconn riot: when the new workers arrived at the campus, they found that the contractual terms had been amended and their payrolls were far from what had been promised. The newly hired workers were different from the freshly graduated students. Many of them were grassroots party members and people with a lot of social experience. When they discovered that Foxconn changed the contractual terms, they would not just leave in silence.

Foxconn,  the world's largest technology manufacturer and service provider headquartered in Taiwan, has been notorious for exploiting student interns and young workers.

The contract dispute could have been solved if Foxconn’s labor union could step in to represent workers’ interests and negotiate with the factory management. However, according to CLB’s investigation, the staffers in the Foxconn worker's union had been sent to serve as pandemic control workers, conducting PCR tests and manning the checkpoints instead of addressing the newcomers’ grievances.

In fact, since mid-November, worker union staffers in Zhengzhou have been mobilized to conduct PCR tests, disinfection, delivery logistics, take phone calls from hotlines, and more, under the nation's zero-COVID policy. Zhengzhou is one of the largest industrial cities in Central China, so in their absence, discontented workers have no other choice but to act on their own.

The result is a no-win situation, as pointed out by CLB:

[the no-win situation is] Foxconn and Apple lnc., which is at the top of the supply chain, have become the globally notorious labour rights infringement experts; the factory can’t fulfil its supply output target and has to pay a large amount of compensation for those who leave. The authority of the government is undermined as it has helped Foxconn to recruit workers, taken the blame, and deployed forces to crackdown on workers with violence. Workers who had no channel to negotiate with the management, were forced to work into an environment that might jeopardize their health, or they had to fight and get injured by police to get back their payrolls. The worker union, which serves as the legitimate representative of the workers, has totally lost their voice, their function in all aspects[…]

Yet, under the statist single-party regime, there remains no space for labor unions to act independently. Not to mention that Beijing’s fixation on the zero-COVID rules would add cost to the factory operations. The recent protests may push Foxconn to relocate out of China, as suggested by mainland Chinese blogger William Long:

My gut feeling is that it is now more likely for Foxconn to move out of Henan. To run a factory campus, you need workers. Now that you spend 2–4 times more and yet you still can’t recruit enough workers. And when the newly hired arrived, they tore down the campus. This is a sign as if god is telling you to move to Vietnam, India, and other Southeast Asian Countries. You can’t go against the odds, or you are digging your own grave.

Managers of global supply chains are getting frustrated with China's zero-COVID policy, which has prompted some manufacturers to already moved out of the country.